Michigan’s Grand Rapids Was Once Known as Furniture City 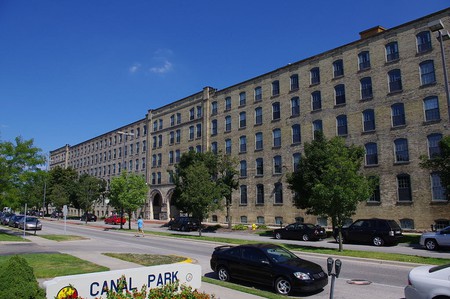 Though its booming beer tourism trade has led Grand Rapids to claim the new nickname of Beer City, for the longest time, it was known to many as Furniture City. At its height, it was home to more than 40 furniture companies and had a global reputation for manufacturing and selling fine wood furniture. But how did this small city in West Michigan become America’s Furniture City?

The man considered the main instigator of Grand Rapids’ furniture industry was William Haldane, who came to the city from Ohio and opened one of its first cabinet shops in 1836. The first companies that would mass-produce furniture on the scale the city would become known for opened in the 1850s, but it wasn’t until the 1870s that this growing industry would receive national and international attention. At the Centennial International Exhibition in Philadelphia in 1876, a number of Grand Rapids companies, including Berkey & Gay, won awards for their furniture and put the city on the map. 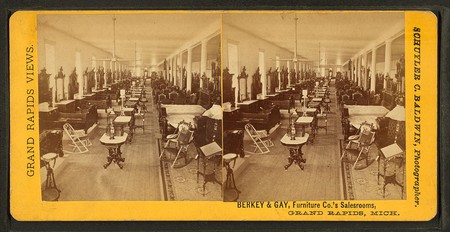 With a reputation to protect, the Furniture Manufacturers Association (FMA) was formed in Grand Rapids in 1881, the first furniture industry advocacy group in the nation. The group worked to protect the companies against rising costs and to maintain the city’s dominance. For instance, every piece of furniture made by its members from 1899 to 1913 featured a “Grand Rapids Made” logo, while the FMA sued a number of companies in other states for fraudulently using the Grand Rapids name.

Tag found on the bottom of a really old bench I'm repairing. Any ideas on how old this might be? #madeingrandrapids #grandrapidsfurniture @grandrapidsmi

Around the turn of the century, the city had solidified its place as the first center of mass-produced furniture in North America, with over 40 furniture companies and as much as half of the city working in furniture manufacturing or related industries such as sawmills, paint and varnish companies, and manufacturers of woodworking machinery. In 1911, the industry suffered its first large setback when more than 6,000 workers went on strike for better working conditions and pay. The strike lasted four months before the workers got what they wanted, and the city could get working again.

Its peak years were ended by the Great Depression and WWII, which saw the industry decline and the city subsequently diversify into other areas, though it remains a center for office furniture even today, with giants like Steelcase, Haworth and Herman Miller still among the city’s largest employers. The mansions of lumber barons that remain in the Heritage Hill neighborhood are another remnant of its heyday as Furniture City.

Perhaps the most fascinating aspect of the success of Grand Rapids’ furniture industry is that there were no real reasons for it. Michigan had an abundant supply of wood, and the Grand River that the city was built around provided easy transportation. However, many competing locations had similar resources. It seems, much like Detroit’s auto industry, it was instead the result of a group of remarkable people coming together in one place.