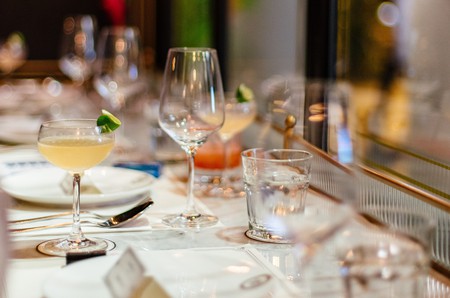 Like the city it was invented in, the Last Word cocktail is both a survivor and a comeback king. The drink originated at the Detroit Athletic Club in the pre-Prohibition era before going practically extinct for the majority of the century, until it was resurrected and became a cult sensation. With the cocktail back on menus across the globe, we take a look at its strange history.

That you can still find a Last Word on any cocktail menu in the world is largely thanks to one man, Ted Saucier, who featured it in his classic cocktail recipe book Bottoms Up, published in 1951. In it, along with the recipe—a mix of gin, green Chartreuse, Luxardo Maraschino liqueur and freshly squeezed lime juice—he credited the drink to the Detroit Athletic Club and wrote about how the cocktail had spread to New York.

It was after finding the recipe in this book in 2004 that famed Seattle bartender Murray Stenson put it on his menu at the Zig Zag Café, and its reputation grew from scratch all over again. The cocktail, which is surprisingly difficult to make and contains exotic ingredients, became a hit among mixologists and drinkers alike and soon spread from the Pacific Northwest during the recent cocktail renaissance.

Eventually, enthusiasts began to ask the club about the drink’s history, but in a typically Detroit turn of events, the home of the Last Word had all but forgotten it. Despite Saucier’s claim that the Albert Kahn-designed clubhouse of the Detroit Athletic Club had been its birthplace, the club knew nothing about it until its resurrection. Communications director and historian Kenneth Voyles and his team began digging and came up with a menu from 1916 that featured a Last Word among its cocktails, charged at 35 cents.

Order a Last Word and drink a part of Detroit history! This Prohibition-era turned classic cocktail got its start at the @dac_detroit's bar in the early 1920s #lastword #cocktails #detroit

The club has since embraced its reputation as the home of the drink, naming a new rooftop cigar bar, which opened in 2015 as part of its centennial celebrations, the Last Word. The drink has also been called the city’s signature cocktail and popped up on menus across the area, so the next time you’re in Detroit, head to the Sugar House or Oakland Art Novelty Co. in Ferndale to try one.

Its originality, ingenuity, rise and fall and rise again, and status as simultaneously classic and modern make it a perfect symbol for the comeback city.