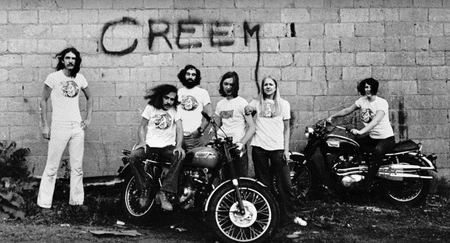 For two decades, Creem magazine punched above its weight as one of the leading voices in rock criticism. Based in Detroit away from the entertainment industry hubs of the East and West Coast, its outsider perspective and ragtag team of misfit writers offered something new and exciting for music fans, an attitude encapsulated perfectly by its self-given nickname, “America’s Only Rock ‘n’ Roll Magazine.”

Detroit record store owner Barry Kramer started Creem in 1969, supposedly after an underground publication rejected his work. The entrepreneurial Kramer, who had also tried his hand at radio, concert promotion and band management, enlisted Tony Reay, a clerk at his record store, to become its founding editor, and Raey suggested naming the publication after his favorite band, Cream.

We've got you covered. #creem #boyhowdy

Working out of offices in the Cass Corridor, it began as a small newspaper only available in Detroit, but over its first two years, it developed into a glossy color magazine and secured nationwide distribution. Key team members to join included Charlie Auringer and Dave Marsh, but none were more important than “America’s greatest rock critic,” Lester Bangs. He began freelancing for Creem in 1970 and was made editor in 1971 after he moved to Detroit, which he called “rock’s only hope.”

That year the magazine moved to a 120-acre farm in Walled Lake, Michigan, where the staff all lived communally, leading to many infamous rows and fights. The magazine flourished though, gaining a global fan base for its uniquely Detroit attitude. Creem and its writers believed that criticism should be like rock itself: crude, energetic, and confrontational. As well as giving exposure to Detroit bands like Alice Cooper, The MC5, and The Stooges, it covered seminal artists such as Lou Reed and David Bowie well before the mainstream and treated many popular acts with wit and derision, a new phenomenon. At its peak, its circulation was second only to Rolling Stone, its rival and polar opposite.

Its impact on music itself was also notable. Critic Mike Saunders was among the first to use the words “heavy metal” in his writing, while Marsh famously coined the phrase “punk rock,” a movement that many believe the magazine paved the way for. With such an incendiary atmosphere, it’s not surprising it burned hot and fast. Bangs left Creem in 1976 and died six years later from an accidental overdose of Darvon. Kramer also died of an overdose in 1981, leaving his wife Connie in charge for the next four years.

In 1986, L.A.-based businessman Arnold Levitt bought the magazine from Kramer’s widow and 18 months later moved its operations there. Within a year, Creem was over, with interest in it fluctuating over the years. Kurt Cobain once told an interviewer that Creem had taught him everything he knew about punk rock, and former Creem writer Cameron Crowe’s semi-autobiographical film Almost Famous featured the magazine and Bangs, sparking a brief flurry of interest in 2000.

Ever since, a number of legal battles have been fought over the rights to the brand and its archives, with Kramer’s son J.J. heavily involved. After years of discussion, a definitive Creem documentary is currently slated for release later this year, though don’t be surprised if it goes the same way the magazine did.