A Guide to Michigan Wine Country 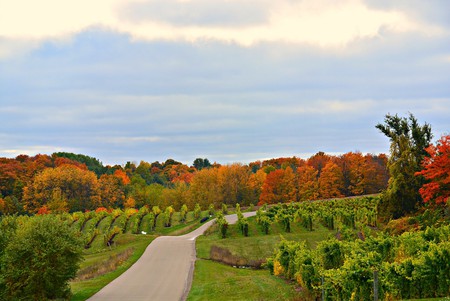 The US is the fourth-largest wine producing country in the world, and though the vast majority of American wine is produced in California, there are also a number of lesser-known wine regions that are well worth a visit. As of 2016, Michigan was fifth in the country for wine production and its growing wine industry has earned it the nickname, “the Napa of the Midwest.”

There are two major wine regions in Michigan, containing five federally-approved viticultural areas (AVAs), a more specific way of determining where wine is produced. The common feature of the state’s AVAs is Lake Michigan, with most of the grapes grown within 25 miles of the lake along the western and northern coasts of Michigan’s lower peninsula. The grapes benefit from a “lake effect,” which protects the vines during winter and spring and enables a longer growing season.

In the southwest, the Lake Michigan Shore and Fennville AVAs account for around 40% of the state’s wine, while in the northwest the Leelanau Peninsula and the Old Mission Peninsula AVAs, which jut north either side of Traverse City, are responsible for 55% of production. The rest is made in the newest AVA, the Tip of the Mitt, situated around Little Traverse Bay further north. The most remarkable thing about Michigan’s wine industry is its recent growth, with a 34% increase in production between 2012 and 2016.

It may be bleak out there now, but remember what we have to look forward to! #michiganwines #michiganvines

With so many of the state’s 138 (as of 2016) wineries near to the lake’s beautiful sandy beaches, impressive sand dunes and charming towns such as Saugatuck, Holland and Traverse City, it’s no surprise they have become part of Michigan’s booming tourist trade, attracting an estimated 1.5 million visitors a year. Many wine trails have been established, with beautiful scenery including rolling hills and coastline to see between some of the best wineries in the Midwest.

The wine produced comes predominantly from vinifera varieties and hybrid varieties of grapes, making a wide range of styles including dry, sweet, sparkling and fortified, as well as rarer specialties such as ice wine and fruit wine. Riesling and pinot noir remain the most produced wines, but to learn more about the state’s best wines, keep an eye on the results of the Michigan Wine Competition, which is held annually in East Lansing and celebrated its 40th anniversary in 2017.