A Visual Tour Of Detroit In 4 Extraordinary Locations 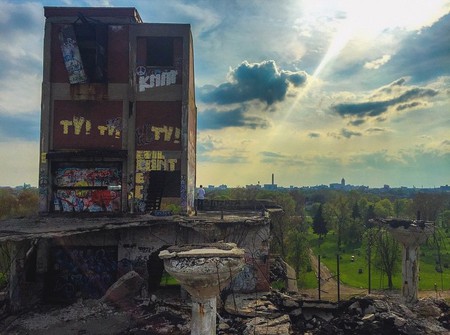 Not long ago, The Culture Trip spoke to skateboarder, filmmaker, and advocate-for-Detroit Jordan Garland about his incredible short film, #aDetroitFilm. Determined to put Detroit firmly on the cultural radar, Garland showcases the talents of Detroit’s urban photographers via a visual tour of his hometown through four off-the-beaten-track locations.

Detroit is one of the most polarizing cities to ever exist. It is not known strictly for conventional beauty. There’s a constant narrative battle in almost all content that comes out of the city against ‘ruin porn’. It’s something that is very frequently discussed, but even more frequently misunderstood. What is missed in those debates is that these abandoned locations are incredibly beautiful sights. A rare, brief glimpse into factories that once mobilized a nation and buildings that once saw tens of thousands of people in foot traffic, frequented now only by wandering packs of wild dogs or the occasional urban explorer.

Some of these structures are being overtaken by nature: grass and plant life grows through cracks in the concrete or basks in the sunlight on the roofs. These abandoned places, neighborhoods, and art projects are so incredible, it’s impossible to do any sort of justice to each location’s overall aesthetic. By exploiting some of the subtleties that make these places so awe-inspiring, the hope is that next time you visit Detroit you will want to explore them and that they will add to the experience of your next adventure. 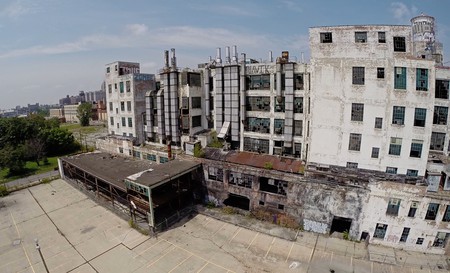 The Fisher Body Plant looms ominously over Piquette Street on the outskirts of Detroit’s downtown. A six-story factory designed in 1919 by the late, great architect Albert Kahn (a man credited with the design of so many of the city’s buildings and factories, he is referred to as ‘The Architect of Detroit’), the plant originally manufactured car bodies for a wide variety of companies like Cadillac, Ford, and Buick. The building has been abandoned for some time now, after many industrial lives. Suffering fires, endless years of Detroit weather, and relentless scrappers, it now stands stripped of all but concrete, and the metal that was far too heavy to be removed. 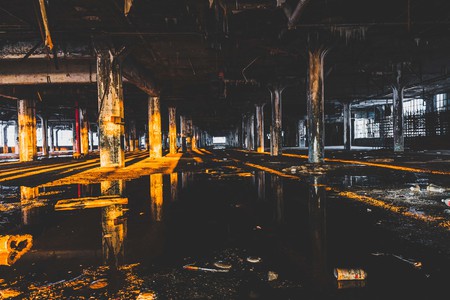 As you venture through the dark ruins, glimpses of light illuminate stalactites hanging from the ceiling, as though you were traveling through a cave. Ascending floor by floor, as more light finds its way in, it reflects through the few remaining unshattered window panes that span entire sections of the walls. Every floor is lined with aged columnal pillars, while every spare inch of concrete is densely coated with spray paint and tags from decades of graffiti artists. 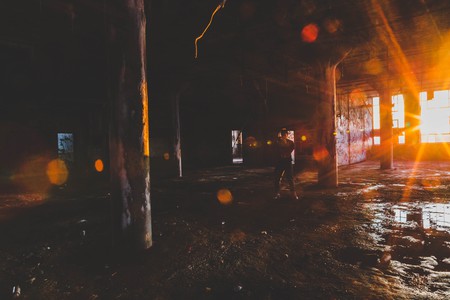 Due to a caved-in floor forming a makeshift ramp, skateboarders and BMX riders can be seen regularly filming their sessions in the ruins. On other floors, many more ridable obstacles have been built for skateboarding and turned into regular rainy day skate spots. 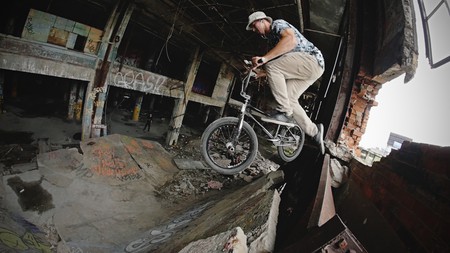 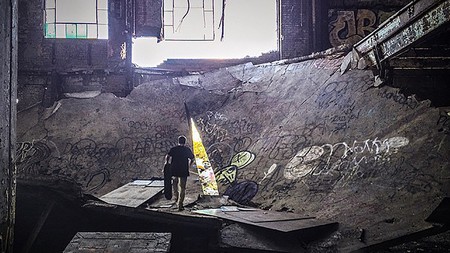 Photo: Jordan Garland | Opportunity is found in the risk and heavy reward of something that exists solely in Detroit. Courtesy of Jordan Garland

Once you’ve made it through the seemingly endless stretch of factory and stale air, walking out onto the roof you are greeted with what feels like your first breath of fresh oxygen and sunlight, like a gateway back to the rest of the world. 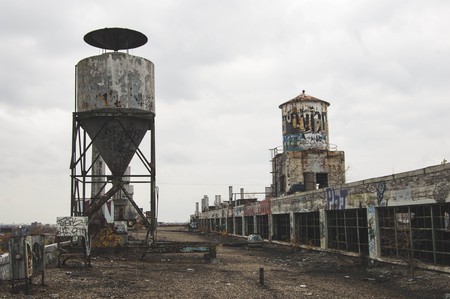 Photo: Ryan Dues | Nothing is out of reach for persistent graffiti artists and scrappers. Courtesy of Ryan Dues

The view from the rooftop gives you a distant but incredible look at Detroit’s skyline in the distance. You can climb a ladder to the top of an aged water tower (if you’re unafraid of heights) and take it all in from even higher above the earth’s surface. Either way, you’ll get your fix of inspiration, leaving you gratified during the trek back down through the site. 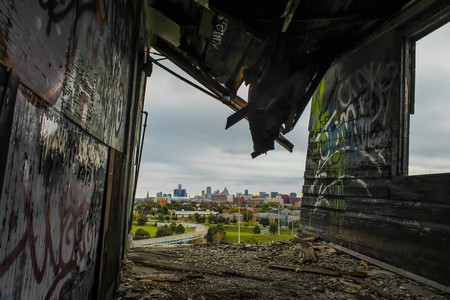 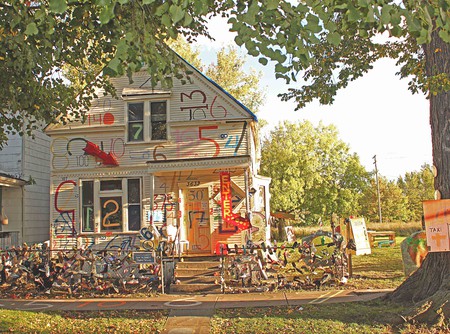 The Heidelberg Project seems to have taken a few pages out of a Dr Seuss book. Well, that’s if that book somehow took place on a colorful block in a rundown Detroit neighborhood. A world-renowned art project created by a man named Tyree Guyton, HP has been a staple of the Detroit art scene long before it flourished as it has now. Tyree started his creations on this block decades ago in response to the dangers and blight of his neighborhood. House after house, yard after yard, all touched by some form of visual art… Everything in sight is adorned with some form of paint, numbers, stuffed animals – there’s even an entire housing structure covered in old records. 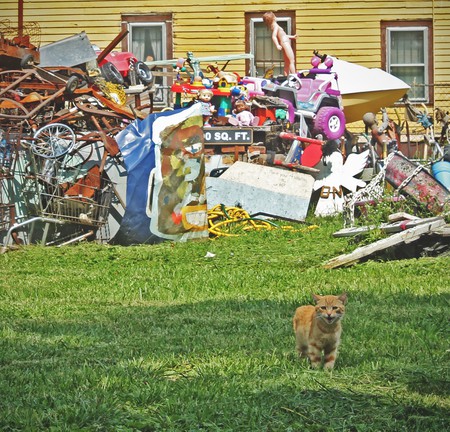 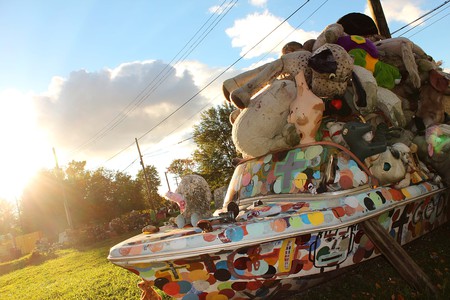 An otherworldly feeling creeps in immediately upon pulling up to the neighborhood and leaves just as swiftly upon exit. When you’re in this little bubble the HP neighborhood creates, you can exit your car and walk the whole span of the block and appreciate how much art is in this space: an exceptional array of clocks, quotes, boats, and car bodies, draped head to toe in art that ranges from vibrant and colorful to powerfully haunting. 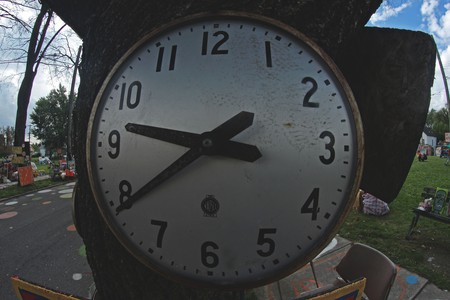 The Heidelberg Project references art in Detroit, spanning so many generations, and serves as a physical symbol of creativity and endurance. It is definitely worth letting this view into your life if you find yourself in or around the Motor City. It’s even more worthwhile once you see the reaction on the confused faces of your listeners, as you try to explain to them something that can only be felt in person. It is hard to make sense of the Heidelberg Project even when you’ve experienced it. 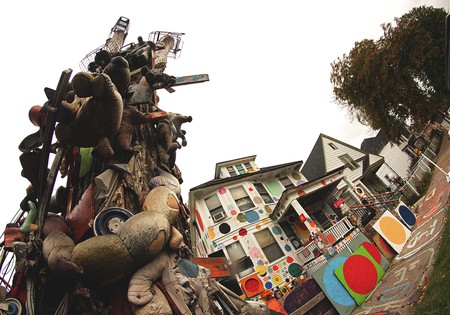 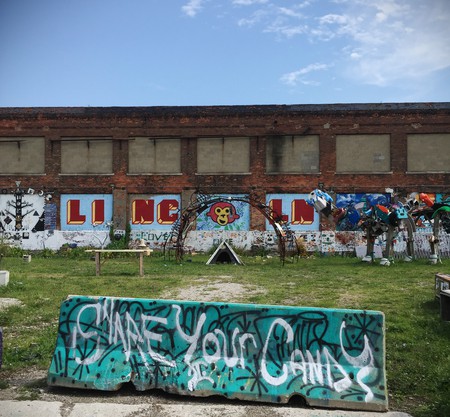 Similar in concept to the Heidelberg Project, Lincoln Street is another art installation that takes on a life and feeling of its own. The first strip of the art park is an underpass with exiting alleyways, with a curated batch of the work of some of the best street artists in Detroit. After you’ve made your way from the overpass and consumed the visual candy the graffiti supplies, you’ll find an abandoned industrial yard. Much like the graffiti, it’s far more difficult to look away from than it is to find.

The yard has been transformed into what feels like a budding garden of an art installment. With all forms of structures built onto the grass, a quick glance would warrant a sure double take, as giant dinosaurs and other creatures appear to be perusing the yard. This view is another one you must make sure you step out of the car and experience. As with Heidelberg, Lincoln Street Art Park reveals new artistic flourishes visit after visit, and you never lose that feeling you got the first time. 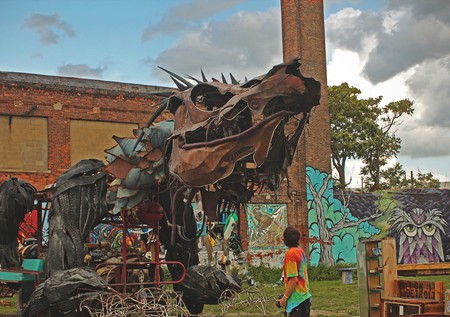 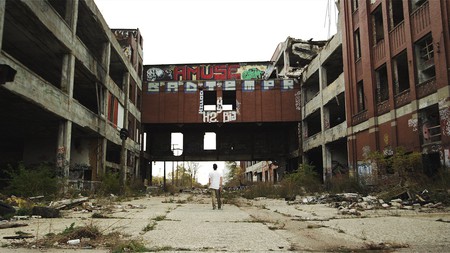 Packard is a like a brother to the Fisher Plant but on a far more monstrous and massive scale. Similarly crafted by architect Albert Kahn, the 3.5-million-square-foot plant was the most advanced auto factory of its time. Its current form is possibly the most post-apocalyptic-looking of all Detroit views. 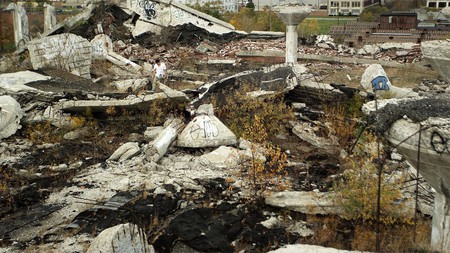 Deemed dangerous due to its collapsing structure, the plant remains an intense and very enlightening sight. Many points of the factory contain webs of rebar that have spun their way hundreds of feet to the ground. Large, thousand-pound chunks of destroyed building appear to float as they’re suspended in the iron webs. The view once you’ve ascended to the roof is one that surely exists nowhere else on earth. Standing atop the rebar webs, overlooking the seven stories partially collapsed to the earth, you look straight ahead and see the downtown skyline, or look below at what resembles a building that suffered multiple meteor strikes. 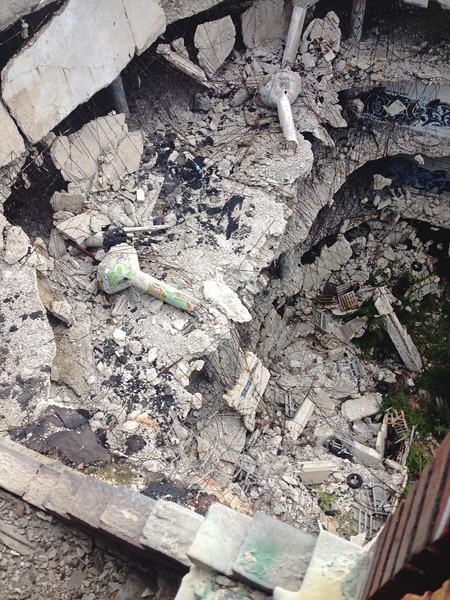 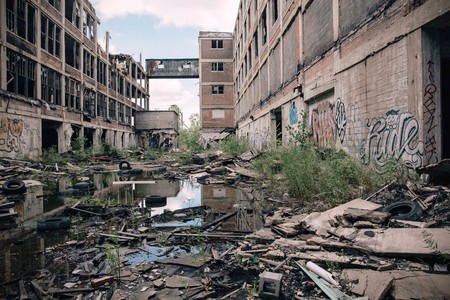 Endless blocks of barren factory, as well as grey and cream cement littered with rusted metal, are slowly being overrun by the dense plant life that’s found its way through and around the decay. One trip through Packard will confirm the feeling that eventually nature will take everything back as its own. Even those things that were the most mighty of their time. 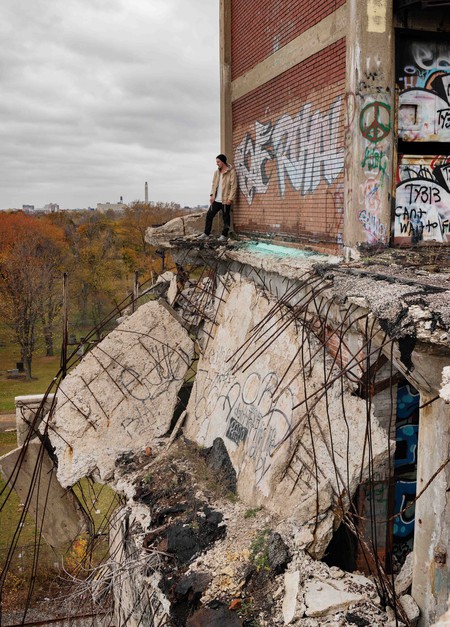 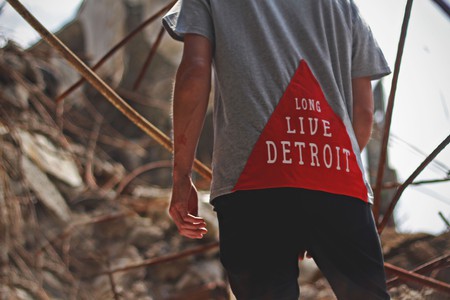 When in a new city, on a trip, or out exploring, the goal should be to take in the true culture of the place, to the best of your ability, and make moments in the minimal time spent there. The most compelling ways to experience these things isn’t through nights spent at a bar or eating what is supposed to be the best food in the area. These things are truly experienced through the time spent exploring parts of the city that the locals gravitate towards. They’re the ones who experience them every day; they’re part of what makes that place what it is. These four locations were chosen because each one will open your eyes to entirely new perspectives and leave a lasting impression you can relive each time you think back on the experience. Everything you are is about the views you choose to take in. 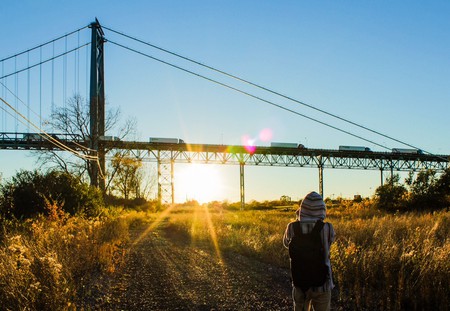