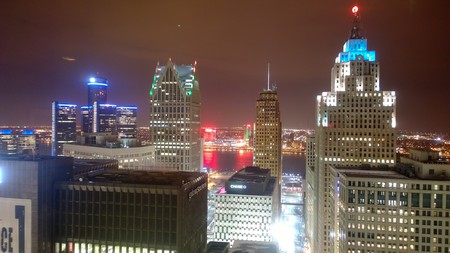 Some of Detroit's most famous Art Deco buildings | © terencechisholm / Flickr

Detroit’s skyline was already growing when Art Deco architecture swept across the Eastern and Midwest U.S. in the 1920s and ’30s, and a number of architects embraced the style and gave the city some of its most arresting buildings. Some structures have been lovingly looked after and restored, and some have had long stretches of being empty, but all are a big part of Detroit’s history.

Some of Detroit’s best Art Deco structures are within walking distance of one another, and there’s nowhere else to start but on Griswold Street, parallel to Woodward Avenue and home to three of the best. Closest to the river and perhaps the building most people think of when it comes to Detroit Art Deco is the Guardian Building at 500 Griswold St, completed in 1929 and originally called the Union Trust Building. Designed by Wirt C. Rowland of the Smith, Hinchman & Grylls firm, its exterior features ornate limestone and terra cotta. Be sure to go inside to see the stunningly decorated three-story vaulted lobby. 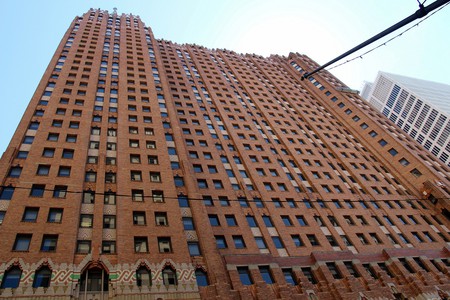 A short walk north up Griswold takes you to the Penobscot Building, a 47-story tower that was once the eighth-tallest building in the world. Designed by the same architect as the Guardian and opened the year before, in 1928, it has many classic Art Deco touches, such as the multiple setbacks of its upper floors, its exterior lighting and its “H” shape. Its name comes from a Native American tribe from Maine.

Further up the street, the David Stott Building was the last skyscraper built in the city until the mid-1950s due to the effects of the Great Depression. The sleek 38-story tower has a marble exterior on the first three floors, with the rest of the building clad in red brick with limestone detailing. As it’s been empty for a number of years, it is currently undergoing restoration.

Heading northeast, the Water Board Building is a triangle-shaped building, making the most of its plot between Bates, Farmer and Randolph Street. Like many Art Deco buildings, it comprises different sections, a five-story base, 15 stories of offices, and a three-story penthouse. It was one of the last buildings by Louis Kamper, who designed several other landmark Detroit buildings.

Continuing north in Downtown, The Fox Theatre was the largest in the city when it opened in 1928, holding over 5,000 people. It was one of five Fox Theatres built in the late 1920s by film pioneer William Fox, and its exterior features cream terra cotta and decorative lintels. In the 1980s, it was fully restored, listed on the National Register of Historic Places, and designated a National Historic Landmark.

A 10-minute drive east along Jefferson will bring you to The Kean, an apartment building dating back to 1931. The building’s decoration includes red and white checkerboard tiles, terra cotta, columns, and gargoyles. It was listed on the National Register of Historic Places in 1985 and designed by Charles Noble, who also designed the Lee Plaza Hotel, another amazing Art Deco building since abandoned but still seen at 2240 W Grand Boulevard, northwest of the city.

Even on overcast days, the Fisher's #artdeco beauty is over the top! #Detroit #architecture

Finally, it’s a short drive north of Downtown to see The Fisher Building on West Grand Boulevard in New Center. Opened in 1928, it consists of a wide 11-story base with a central tower of 28 stories. It features a stunning three-story barrel-vaulted lobby, with 40 different kinds of marble from across the world used in its decoration. The building is also home to the Fisher Theatre, though that was renovated in 1961, and has a remarkable 21 elevators.