A Guide to Michigan’s Football Culture 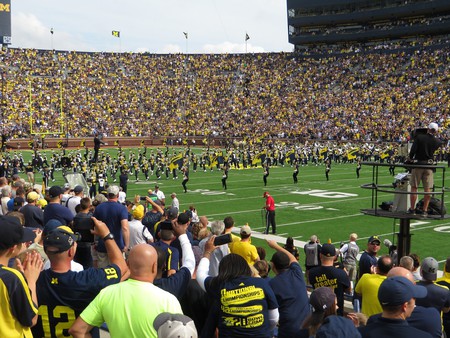 Last year, when former Michigan Wolverines left tackle Jake Long retired after nine seasons in the NFL, he said, “I loved the pros and had a lot of great memories, but nothing compares to Michigan football culture.” So what is it about football in the state of Michigan that is so special? Here’s a rundown of the teams, the traditions, and the triumphs.

There are plenty of reasons why the University of Michigan’s Wolverines are one of the most iconic football teams in the U.S. With the most all-time wins in college football, 11 championships, an incredible stadium (see below) and support, a famous fight song, an instantly recognizable uniform and some of the best rivalries in sport, there’s only one thing left to say, Go Blue! 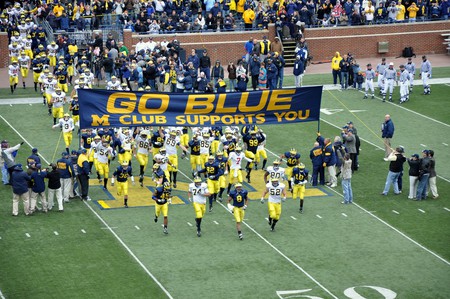 Michigan Stadium, built in 1927 and nicknamed “The Big House,” is not only the largest stadium in the U.S. but the second largest in the world, seating a mammoth 107,601 people. Every University of Michigan home game since 1975 has attracted a crowd of at least 100,000. For comparison, the largest NFL stadium, the MetLife Stadium, seats 82,500.

Michigan’s fight song “The Victors,” or “Hail to the Victors,” was written by Michigan student Louis Elbel in 1898 and is considered the first important fight song. It has also frequently been named the top fight song in college football.

Proving Michigan has not one, but two iconic college football teams, East Lansing’s Michigan State Spartans are also a “Big Ten” team and have six championships. They also have an iconic look and one of the oldest and most recognized marching bands in the country. And because we’re not biased at Culture Trip, Go Green! 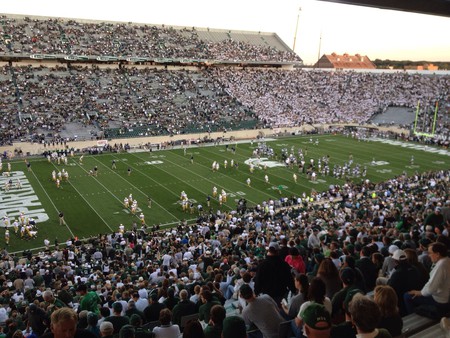 Michigan State’s mascot Sparty is among the most famous in the country, running out every game and doing one-handed push-ups for the crowd. Sparty made his first mascot appearance in 1955 and has featured in national commercials, as well as being the first “Big Ten” mascot to win the Best Mascot National Championship. 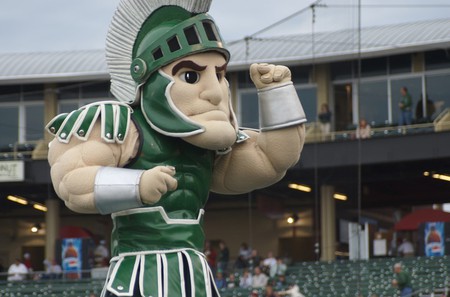 Since 1953, the winner of the annual game between the University of Michigan and Michigan State has been awarded the Paul Bunyan-Governor of Michigan Trophy. While the Wolverines still hold the overall win record, the Spartans have won eight of the past 10 meetings between the sides.

Paul Bunyan is headed back to East Lansing!!!

While the Michigan vs. Michigan State game is certainly big, there are some who say it’s not as big for one side as the other. Last year, Desmond Howard, a Heisman trophy winner at Michigan, said, “We obviously want to go out and beat them. But it’s not the Ohio State-Michigan game. It’s not the Notre Dame-Michigan game.”

He may have a point as Michigan’s long-standing and famous rivalry with Ohio State, often referred to as simply “the Game,” was ranked as the greatest North American sports rivalry by ESPN in 2000. Michigan State has their own famous rivalry with the University of Notre Dame, which included 1966’s “Game of the Century,” which has been called the greatest college football game ever.

For both teams, no game day is complete without partaking in the pre-game tradition of tailgating. All over Ann Arbor and East Lansing, crowds gather to grill, eat, drink, dance and have fun with their fellow Wolverines and Spartans fans. As the people are so excited for the day, tailgates often start as early as 7 am, a full eight hours before the game.

At Wolverines games, traditions include jingling keys during “key” plays, fans cheering the score of Slippery Rock, a small public university in Pennsylvania, and chanting “you suck” when the opposition fails to convert a third down.

At Spartans games, the announcer always begins by saying “It’s a beautiful day for football!” whatever the weather and AC/DC’s “Thunderstruck” greets the team every game. Cheering “Go Green, Go White” and the frisbee-catching Zeke the Wonder Dog are other things to watch out for.

Last but not least, let’s not forget Michigan’s pro team, the Detroit Lions. While they may have the second-longest NFL championship drought, they still have four NFL championships, making them tied for 9th overall. Despite their recent record, their games at Ford Field attract 65,000 fans. Lions game-day traditions include the Roar Meter, the Lion Cub Cam, and Roary the mascot.