Boston Neighborhood Spotlight: Everything To Know About the North End 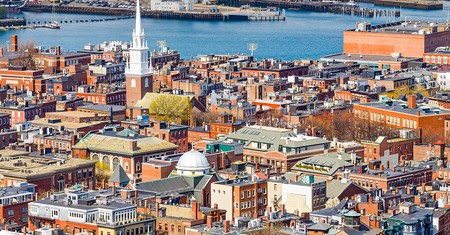 Here’s everything you need to know before visiting Boston’s historic and very distinct Little Italy. 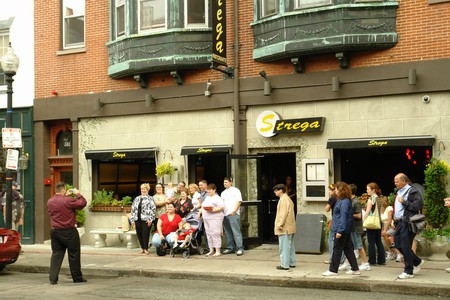 A crowd is just beginning to form on Hanover Street outside Mike’s Pastry in Boston’s North End neighborhood. It’s a mix of people – some tourists waiting to get in line, others stopping to sneak a bite of an Italian cookie they just picked up inside. Another, smaller group is discussing where to go next. If they look a block down the street, they’ll see a street sign pointing them in different directions with Italian place names – Roma, Napoli, Sicilia and Capri, among others. They won’t get to those destinations by walking in this neighborhood, but they have a bounty of restaurants to choose from, all inspired by those same places. 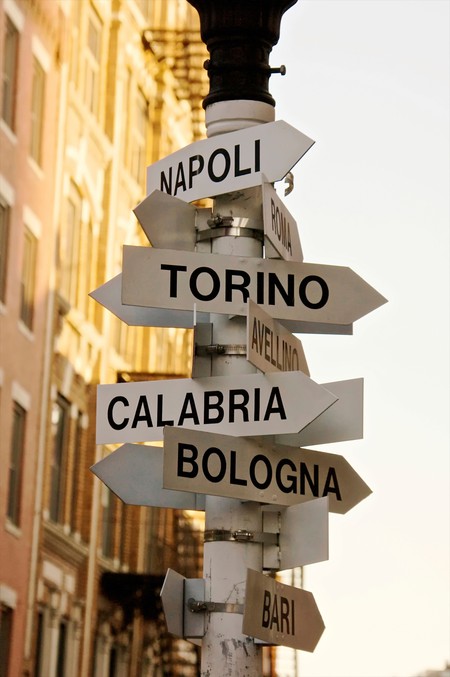 Boston’s oldest residential neighborhood and a hub of Italian-American culture, the North End has long been a quintessential part of Boston. Situated in a cozy, one-square-mile corner on Boston’s waterfront, the neighborhood offers a mix of history, culture and cuisine now overflowing with long-time Italian restaurants and bakeries.

A vibrant history of immigration

While the North End is today known as the home of Boston’s Italian-American culture, the neighborhood has played host to a succession of immigrant groups throughout its nearly 400-year history. First settled in the 1630s, the area, in the northeast corner of the city, was home to ship merchants and captains by the time the American Revolution began. With the help of Paul Revere, who lived in the neighborhood from 1770 until 1800, the North End even played a small part in the war itself, when Revere rode from the Old North Church to Concord on his famous ‘midnight ride.’ 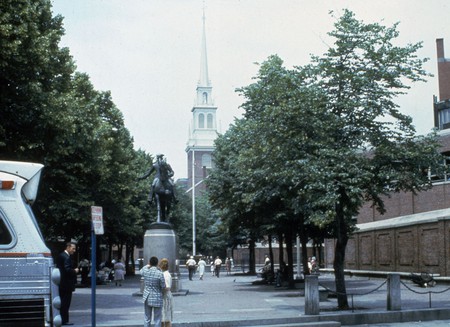 After the war, the demographics in the North End started to shift and tenement houses sprouted up. Irish immigrants looking for work and fleeing famine in Ireland moved into the neighborhood in the early and mid-19th century before moving over to South Boston. Jewish immigrants then arrived in the area, and Salem Street became the hub for Jewish culture in the city, with family-owned grocery stores and shops lining the street and surrounding blocks. There’s little evidence of their mark on the neighborhood today, but a few reminders – including an old Hebrew School sign on Jerusalem Place – remain. Towards the end of the century, Italians, mostly from southern Italy, moved to the neighborhood in vast numbers. By 1930, the North End was almost 100 percent Italian. 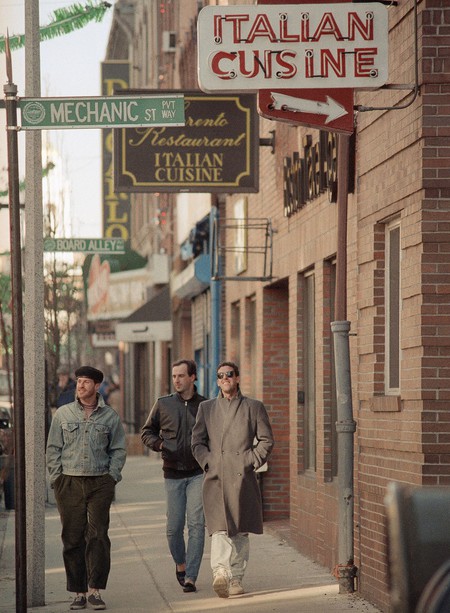 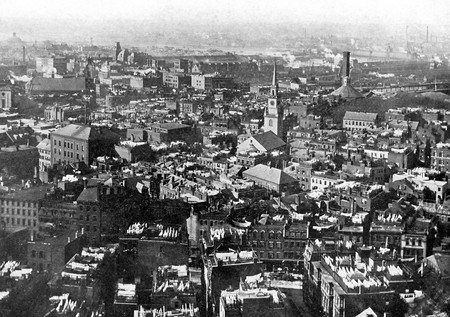 A hub of Italian culture

Today, if you walk down bustling Hanover Street – the main street in the neighborhood – or one of the cobblestone walkways, there’s an abundance of Italian eateries, bakeries and culture. After the area became mostly Italian-American in the early 1900s, family establishments arrived in bulk, new residents held strong to their traditions, and the North End slowly started to receive its moniker as Boston’s ‘Little Italy.’ 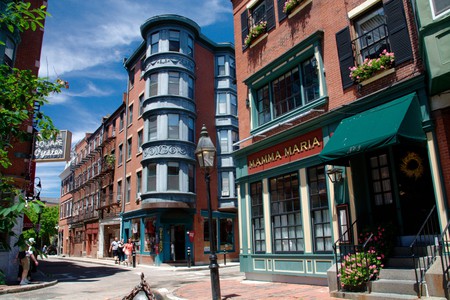 To Anthony Buccieri, a North End native and the chief operating officer at Regina Pizzeria, a famous pizzeria nearing 100 years in the neighborhood, that culture brought a tight-knit atmosphere that was visible to both locals and tourists. He remembers groups of children on every street and long-time residents yelling to passers-by from their windows. Conversations in Italian could be heard frequently up and down the narrow streets.

“When you grow up in the North End, it’s like, ‘Wow, that was the experience,’” Buccieri says. “It’s like what you see on TV, they look at A Bronx Tale and so on. But, really, we were A Bronx Tale, I mean that’s how we grew up. People singing on the side, you know, on the corners and all that type of stuff. It was friendly. Everybody watched out for everyone. That was the whole thing. It was just a friendly neighborhood.”

Today, only a small number of North End residents are of Italian heritage, and with new condos piling up in recent decades, the neighborhood’s population now mostly consists of young professionals and businesspeople. But the Italian feel still looms large. Many family establishments haven’t changed, and the ones that did were replaced with other local eateries and shops. Italian conversations can still be heard on side streets or in restaurants. And there’s still that close connection among residents.

“It’s family,” says Toni Gilardi, who grew up in the North End and is now a veteran real estate broker in the neighborhood. “Walking down the street, knowing everybody, saying hi to everybody. I mean, on your worst day, you can’t pout when 25 people recognize you and wave from across the street and ask you how your mother is doing and what’s going on, what’s up for tonight. I mean, you just can’t stay in a funk when you have so many people around you [who] know you and support you. It’s amazing.”

Another part of Italian culture still around today is the feasts that take place each summer. Starting in June and running through early September, the North End plays host to over a dozen Italian feasts and festivals, all in honor of a different saint and put on by the community’s religious societies. The narrow streets are adorned with eccentric decorations and large crowds while processions march through the neighborhood. For each festival, there’s a slew of food vendors selling appetizing Italian dishes.

The biggest festival – Saint Anthony’s Feast – takes place over the last weekend in August. Started in 1919 by immigrants from Montefalcione, Italy, the three-day feast celebrates Saint Anthony of Padua and Santa Lucia with lively processions, Italian-American music and religious ceremonies. The weekend ends with a 10-hour grand procession of the Saint Anthony statue through the streets of the North End alongside Italian street bands and locally sponsored floats. 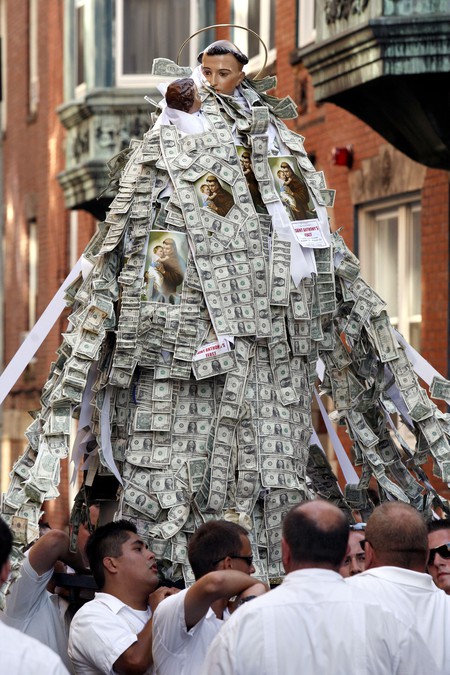 “It’s a great demonstration of what an old-school Italian-American street festival should be and is in this day and age,” says Jason Aluia, a trustee on the feast’s executive board and a member of the feast committee.

Where to eat in the North End

With all the plentiful food and dessert options in the North End, it can be hard to narrow down the choices. There are nearly 100 restaurants, cafés and markets – almost all Italian – throughout the neighborhood, each with its own specialties and history.

On almost any night, Hanover Street is bustling with a lively energy and filled with cannoli-eating tourists. It’s lined with family-owned eateries and bakeries in snug locations, and down each side street and alleyway are other authentic Italian joints. There’s Giacamo’s, an intimate, no-frills restaurant that doesn’t take reservations and accepts cash only. A line forms outside almost immediately when it opens each day. The Daily Catch, a fresh seafood spot, has its original and most famous location in the North End, as does Regina Pizzeria. The cozy pizza shop, located on Thatcher Street, first opened in 1926, and it still makes its delicious pizza with the same sauce recipe in the store’s original brick ovens. 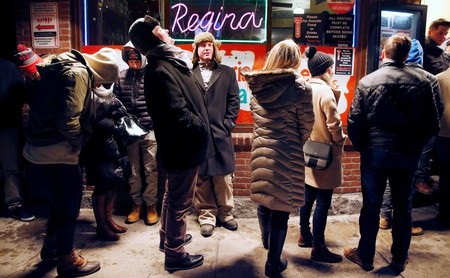 As for bakeries, Modern Pastry and Mike’s Pastry are the most famous in the neighborhood. Modern, which has been in the area since 1930, is known for its Italian cakes and handmade cookies, while Mike’s bills itself as the ‘home of the cannoli.’ Bova’s, located in the same spot on Salem Street since 1932, is open 24 hours a day and is well known for its home-made Italian breads and large arancini balls. 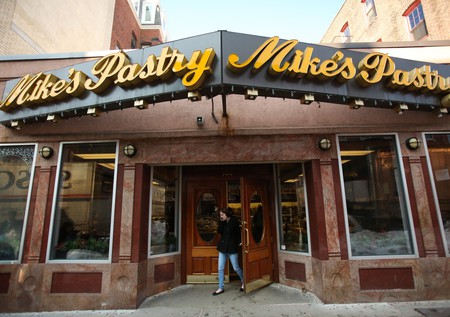 The best way to find a favorite spot, though, is to roam down Hanover Street and the surrounding blocks. The crowds and drifting smells will lead you to what’s best.

“I love that I could go outside my doors to this day – and I tell people when they’re visiting the same thing – go into the neighborhood, go to the local [deli] and get some salami and cheese that you can’t get somewhere else,” says Aluia, who is also a North End native. “Go to Caffe Paradiso, have a coffee and a gelato. Go to Mike’s and Modern’s and Maria’s [Pastry Shop], and you tell us what your favorite cannoli is, because we’re not going to get involved in that battle, because they’re all great people.”

What to see in the North End

While most locals travel to the North End for its food, there are opportunities to visit historical sites and green spaces as well. Three of the 16 spots along the Freedom Trail are in the neighborhood, including Paul Revere’s house, Old North Church and Copp’s Hill Burying Ground, the second-oldest cemetery in the city.

North Square is popular for its cobblestone walkways, as is the Rose Fitzgerald Kennedy Birthplace, the site of the first home of the Kennedy family matriarch and mother of President John F Kennedy. All Saints Way, a shrine that pays tribute to almost every saint canonized by the Catholic Church, sits in a private alleyway between Hanover and Battery streets. 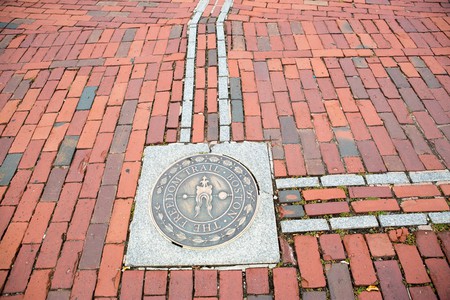 The North End is also notable for its location along the waterfront, where it is surrounded by Boston Harbor on two sides. The neighborhood’s section of the Boston Harborwalk, a public walkway along the water, is among the most visited in the city. It allows visitors the chance to stroll along the shoreline and access Langone Park, Christopher Columbus Park and Mirabella Pool as well as several of the area’s wharfs. The North End is also home to Boston’s United States Coast Guard base, where visitors can view a small fleet of ships.

Open since 1926, Regina Pizzeria is a cozy brick-oven pizza shop on Thatcher Street.

Ristorante Fiore, on Hanover Street, is an elegant Italian restaurant with an outdoor patio and rooftop seating area. 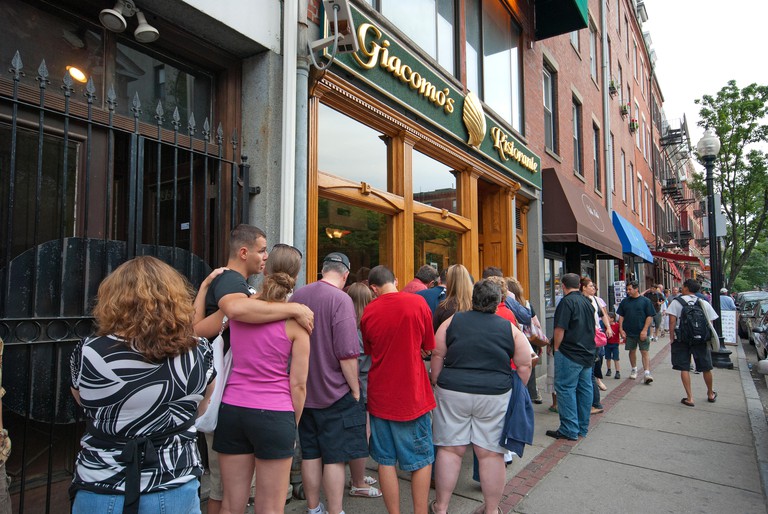 Giacomo’s is an intimate, no-frills Italian restaurant. The eatery takes cash only and usually has a line out the door, but it’s worth the wait. 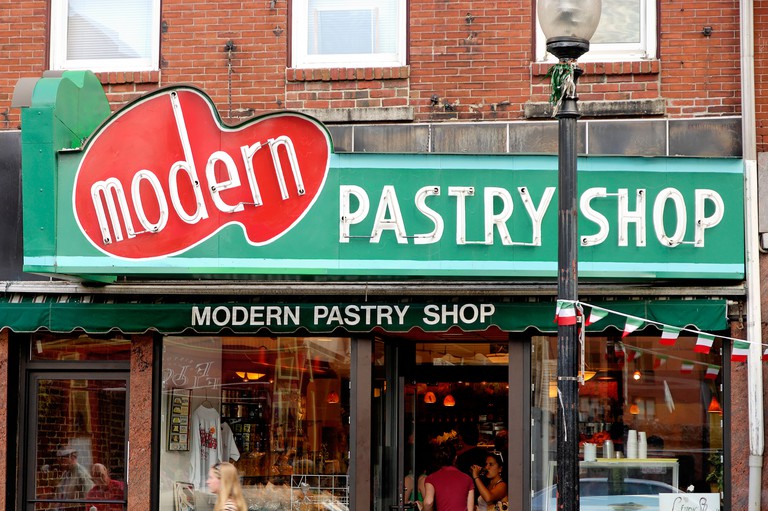 Modern’s sign was modern in its day | © AlanHaynes.com / Alamy Stock Photo
A family-owned bakery, Modern Pastry is famous for its home-made Italian cookies and pastries. It’s a perfect spot for an after-dinner dessert while walking the North End.

Open 24 hours a day, Bova’s Bakery is a family-owned shop that’s been open since 1932. It features home-made Italian breads and large arancini balls that have become a favorite midnight snack for both North End locals and tourists. 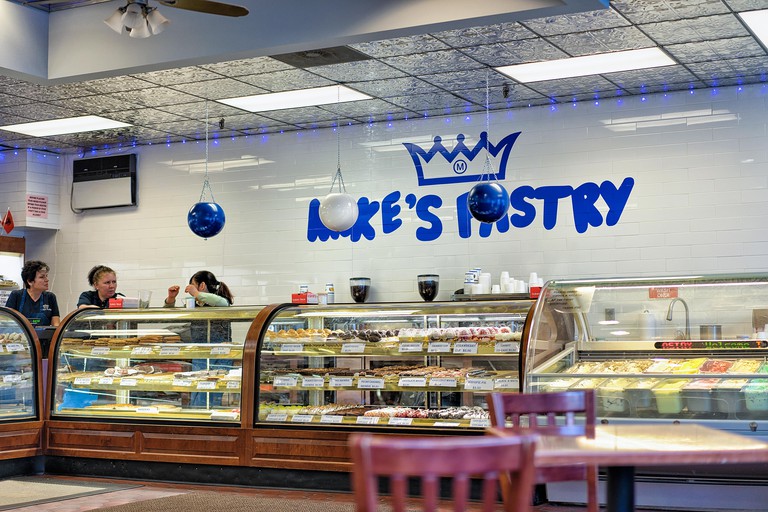 Mike’s Pastry on Hanover Street is the best-known pastry shop in the North End. Billed as the ‘home of the cannoli,’ the family-owned shop brings in a large crowd almost every night with its delicious Italian desserts.

Maria’s Pastry, which offers a mix of Italian desserts and pastries, has established itself as one of Boston’s favorite bakeries alongside Modern and Mike’s. 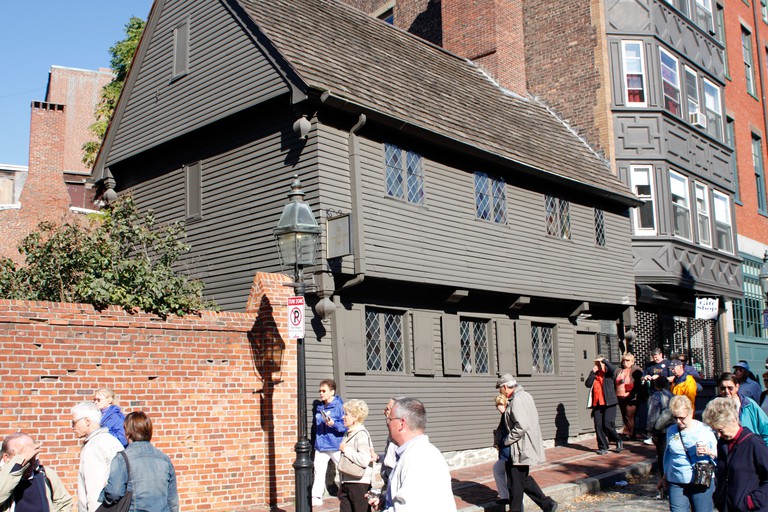 Located along Boston’s Freedom Trail, the Paul Revere House (built in 1680) is the former home of the American patriot from 1770 to 1800. It’s the oldest remaining building in downtown Boston and is now a museum. 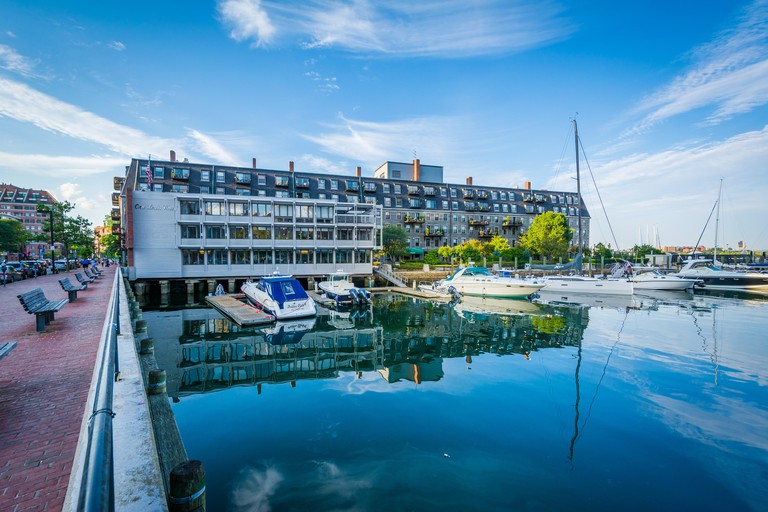 The stretch of the Boston Harborwalk around the North End is among the most popular and most scenic walks in the city. 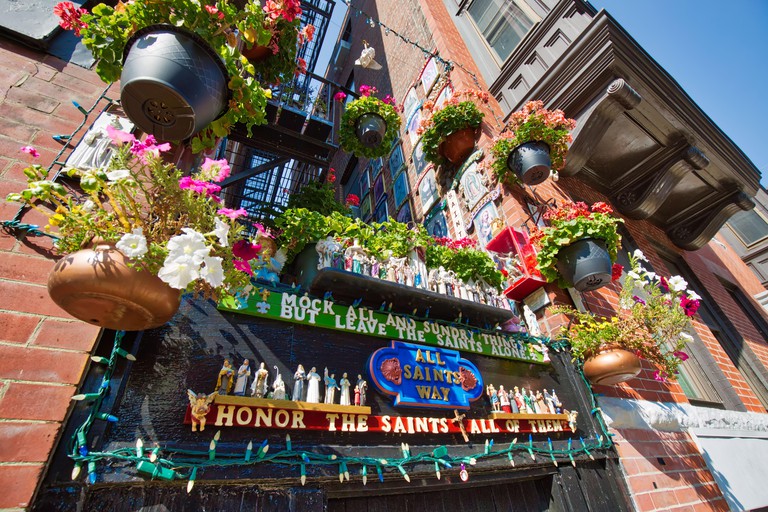 All Saints Way is a labor of love for its creator, Peter Baldassari | © Elijah Lovkoff / Alamy Stock Photo
In a private alleyway between Hanover and Battery streets in Boston’s North End, this shrine pays tribute to almost every saint canonized by the Catholic Church. All Saints Way was created in the 1990s by long-time North End resident Peter Baldassari. He lets the public stroll through on occasion and tour the memorabilia and decorations, but it’s still worth a look from the entrance, especially when it’s decorated for the holidays.
Give us feedback