What You Need to Know About New Orleans’ Red Dress Run 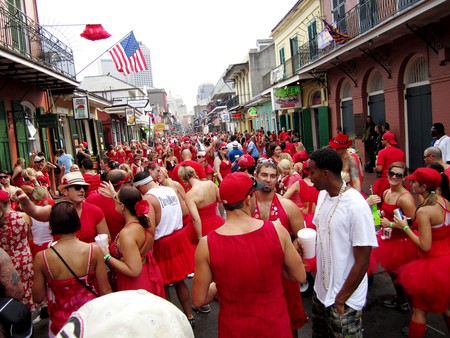 Each year on the second Saturday of August, a sea of thousands of red dress-clad runners gather in cities around the world to run, party, and raise money for charities—an event known as the Red Dress Run. But as with any celebration, New Orleans knows how to create a truly vibrant spectacle, and the city’s own annual Red Dress Run is no exception.

The Red Dress Run didn’t originate in New Orleans, but the city is certainly one of the most visible participants. As legend has it, in 1987, a woman wearing a red dress was visiting a high school friend in Southern California when she unexpectedly found herself meeting her friend’s Long Beach, California, running group, the Hash House Harriers—“a drinking group with a running problem.” Despite her arguably ill-fitted attire, the woman ran with the group anyway, forever becoming immortalized as “The Lady in Red” by the annual Red Dress Run each year.

The Red Dress Run tradition has spread across the world and has successfully raised millions of dollars for local charities in many cities, including New Orleans. In its 10-year history, the Red Dress Run in New Orleans alone has raised about $2 million for charities in the area, such as Bridge House/Grace House, Hospice Foundation of the South, and UNITY of Greater New Orleans. 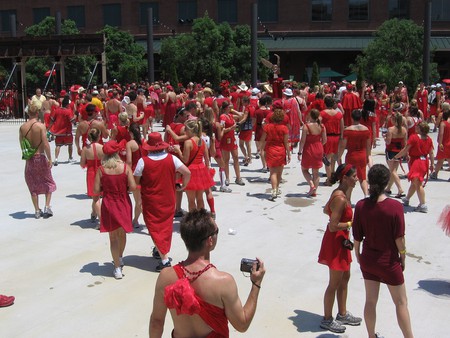 What you can expect from the event

On the day of, events for the Red Dress Run begin at 9 a.m., with the run itself kicking off at 11:30 a.m., rain or shine. Participants must be over the age of 21 and wear red dresses, and for frequent participants, it’s technically a faux pas to wear the same outfit two years in a row. Ever-prepared, the New Orleans Hash House Harriers offer a red dress swap for past participants. Those participating in the run and the official party must also register and pay the registration fee beforehand or on the day of on-site at the event.

However, participation in the Red Dress revelry is not necessarily limited to those participating in the run itself. Many other locals and visitors alike will don red dresses and attend any number of parties and events occurring throughout the French Quarter and nearby neighborhoods, particularly along Bourbon and Royal Streets. As can be expected, many people will be drinking, dancing, and walking around outside in the summer heat, so if you’re going to bring younger kids to see the spectacle, bring them earlier in the day before the partying gets out of hand. And remember to hydrate. 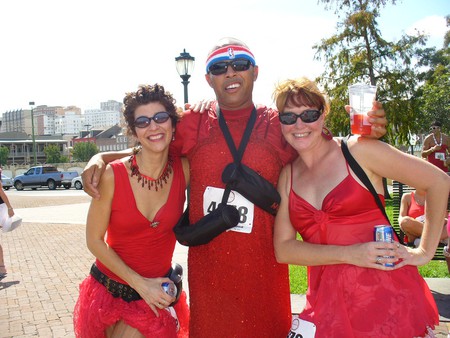 Where to catch all the Red Dress action

After three years of beginning at Armstrong Park at the edge of the French Quarter, the Red Dress Run received a new starting point in 2017—Crescent Park along the Mississippi Riverfront in the Marigny. The run’s new route began at Crescent Park, traveled down Esplanade and briefly into the French Quarter, and then headed back to Crescent Park. Organizers said the venue change was meant as a cost-cutting measure, so depending on registration numbers, this could become a more permanent location in the future.

Either way, strolling through the French Quarter always offers opportunities for a great story or photo op, and if you can access a balcony, the deluge of red dresses is spectacular to see from above.

The Red Dress Run is a can’t-miss event if you plan to travel to New Orleans in the summertime. The weather may be hot and humid, but at least you’ll fit in with your cold beverage and snazzy red attire.