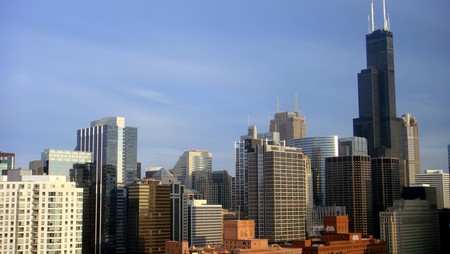 The Willis Tower, formerly known as the Sears Tower, is the defining building of Chicago’s skyline. Not only is it the tallest building in Chicago, but it also held the record for tallest building in the world for 25 straight years. It’s a very historic building — not solely for its height, but also for its architectural achievement and design.

The Willis Tower is located in Chicago, Illinois, in an area known as The Loop. It’s west of Lake Michigan, east of the Chicago River, north of Museum Campus, and south of the John Hancock building. Willis Tower was inspired by modern designs of the 20th century — German architects such as Mies Van Der Rohe took a ‘less is more’ approach to architecture and provided inspiration for the Willis Tower’s design (look especially at its large open spaces, heavy duty steel frames, and big windows). At the turn of the century, these ‘skyscrapers’ became the tallest buildings on earth, which required new methods of design and construction. Architects and engineers had to discover different ways to counteract wind forces, especially in a place known as The Windy City.

In 1970, construction began on the building, which was then called the Sears Tower. Sears was the largest retailer in the world and was looking for a centralized office building. They chose this location for its beauty, but also because it is within walking distance to many train stations for commuting employees. Sears contracted architects Fazlur Rahman Khan and Bruce Graham. Khan introduced methods of construction called the bundled tube and the trussed tube, respectively. Willis Tower’s northern neighbor, The John Hancock Building, ended up utilizing the trussed tube design. This type of design uses a frame outside of the main structure of the building to redistribute forces, which gives the Hancock Building strength and durability. 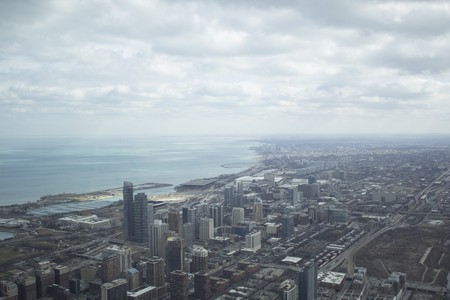 The Tower consists of nine structures of varying heights that are bundled together to withstand wind forces. This gives the structure great strength and durability functionally and provides large open spaces with many windows for aesthetic appeal. Unlike other skyscrapers with central columns, Willis Tower’s bundled-tube design allows for each of the nine structures to give each other strength and support. Its construction was completed in 1973 and was open to the public the year after. 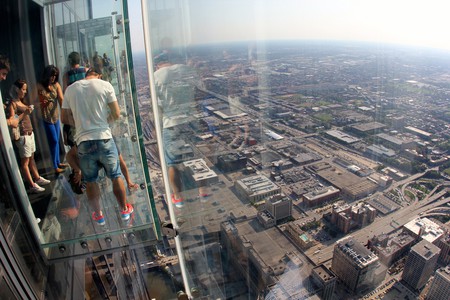 Not only is the Willis Tower an architectural achievement, but it is also a great tourist attraction. When you visit, you will likely see groups of international people ranging from students to familieson vacation. Willis Tower is home to many restaurants and businesses, and is the international headquarters for United Airlines. It is also home to two great Chicago attractions — the Skydeck and the Ledge.

The Skydeck is an observation deck on the 103rd floor of Willis Tower. It gives you a view of the city from all directions. Most of Chicago’s landmarks are visible from here — you can spot McCormick Place, Soldier Field, and Northerly Island to the south, Lake Michigan to the east, The Hancock Building to the north, and The United Center to the west. On a clear day, you can actually see Indiana, Michigan, and Wisconsin from the Skydeck. The most exciting part of the Willis Tower is The Ledge. The Ledge is a glass platform that extends from the body of the Skydeck’s western side. It is a great place to take pictures and to have your picture taken. The cost of admission is $22, and there are numerous gift shops with Chicago themed souvenirs such as Bulls and Blackhawks merchandise, snow globes, and delicious fudge. Make sure to get there early (before noon) during the week, because it is very busy during the summer, Christmas, and Spring Break.

The Willis Tower is the highest point in Chicago — not just physically, but also culturally. It is a confluence of many different architectural styles, a great tourist attraction, and an amazing chance to see the beautiful city of Chicago from above. When you visit, make sure you experience the Willis Tower and all it has to offer.

Daveed Holmes was born and raised in the South Suburbs of Chicago. He recently graduated from UIC with a BFA in Art and Design. He is an aspiring writer and photographer who loves the outdoors, exercising, and plans to travel the world embracing foreign culture and traveling to ancient ruins.