With a Map and a Camera, a Photographer Tackles Chicago’s Segregation 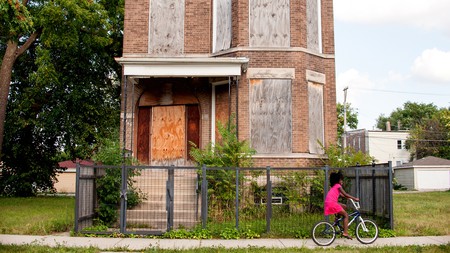 For activist and photographer Tonika Johnson, Chicago’s grid plan became a canvas on which to explore stories of socio-economic and racial inequality in the city.

Tonika Johnson took the Chicago Transit Authority (CTA) every day 15 miles north from her neighborhood in Englewood, Chicago, to attend Lane Tech High School when she was a teenager. While others may have spent the two-hour commute reading or dozing, Johnson found it impossible to ignore the stark changes in scenery as she traveled from the South Side, full of neglected, weathered buildings, to the North Side, rich with groomed lawns and polished homes.

Chicago’s segregation and inequity stared her down; Johnson stared back, through a camera lens. She started taking pictures. 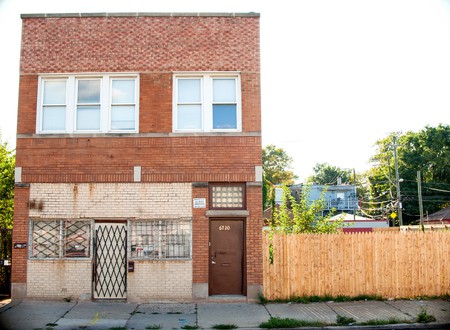 A building at 6720 S. Ashland in West Englewood | © Tonika Johnson 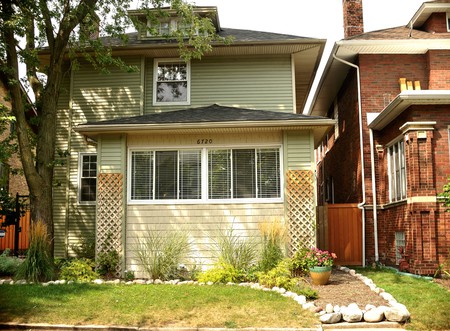 Chicago operates on a grid system. This means that the city’s streets (for the most part) run in straight lines either parallel or perpendicular to each other, not unlike a quadratic graph with x- and y-axes. If the graph is Chicago, the x-axis is State Street and the y-axis is Madison Street. The center (0,0) is where State and Madison intersect downtown. From that point, every interval (1, 2, 3) is like a city block. This is how addresses in Chicago are determined. So 500 North State Street would be roughly five blocks north of State and Madison; 500 South State Street would be about five blocks south of the intersection. Under this system, if you fold a map of Chicago in half along Madison (the y-axis), addresses like 6330 N Paulina and 6330 S Paulina fall right on top of each other.

One effect of the grid system is racial segregation. Beginning in the early 1900s, African American families weren’t allowed to purchase land, rent homes or occupy buildings beyond a certain section of the grid on the South Side, and the detrimental effects of these racist policies are still present today. Johnson set out to demonstrate this.

“Even when I wasn’t intentionally looking at the gradient of change that was my commute, I had a heightened sense of awareness of Chicago’s map,” Johnson says. “It was ingrained.” 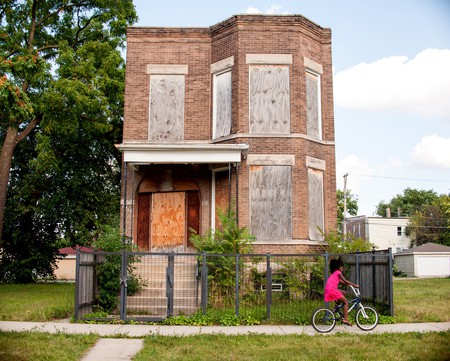 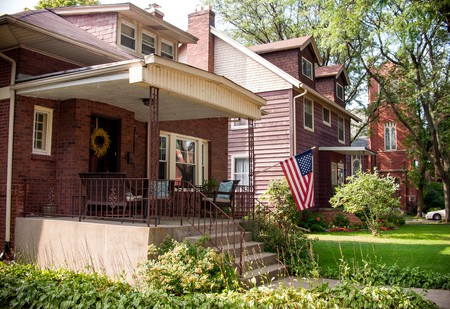 In early 2018, Johnson began taking photos of buildings with near-identical addresses to explore her observations. She dubbed this new project Folded Map, and called her featured locations Address Pairs because when placed side by side, her images plainly revealed how run-down homes and businesses on the South Side were, compared to those with matching addresses on the thriving North Side. Her work presents a clear picture of how differently the city’s communities are taken care of and how racial segregation still affects Chicago’s neighborhoods today.

Initially, Johnson thought Folded Map would only contain Address Pairs, showcasing the differences in landscaping and building upkeep on the North and South sides. Then, curious residents began engaging her in conversation when she was out and about taking photos. As they asked about Folded Map, she realized Chicagoans needed to be involved in this visual depiction of their city. This was about human beings – not just housing.

She wrote letters to residents living in neighborhoods she wished to photograph and asked people if they’d be interested in having their pictures taken with their Map Twin – her term for people living at identical addresses on opposite sides of the city. Well aware that handwritten letters from a perfect stranger were “weird and creepy,” Johnson appealed to the Loyola University Museum of Art (LUMA) for help to get the word out. 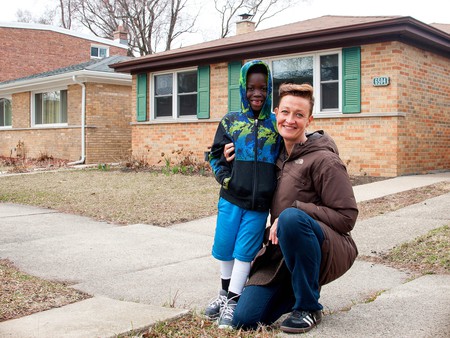 LUMA had previously hosted Johnson’s exhibition, Everyday Englewood, a series of photos exemplifying the beauty of Englewood as a response to overwhelmingly negative views of the South Side neighborhood in media outlets. That work helped earn her a spot among Chicago magazine’s 2017 Chicagoans of the Year. On Johnson’s behalf – and on the school’s letterhead – LUMA sent typed letters to residents explaining all about Folded Map, Everyday Englewood and Johnson’s experience as an activist.

After a week and a half, Johnson’s phone started ringing, and she began to photograph Map Twins around the city. These images of residents meeting, visiting each other’s homes and sharing their stories were exhibited at LUMA from July to October 2018. Visitors could not only view photographs and read corresponding stories, they could pinpoint their own homes on a giant map and see if their Map Twin had done the same.

It was smooth sailing until Johnson realized that there was confusion surrounding the grid itself. Unexpectedly, not everyone attending was familiar with the grid system or understood the reality of Chicago’s segregated neighborhoods. To better contextualize Folded Map in these terms, she partnered with the Metropolitan Planning Council to display reports on the cost of segregation, both fiscally and socially. 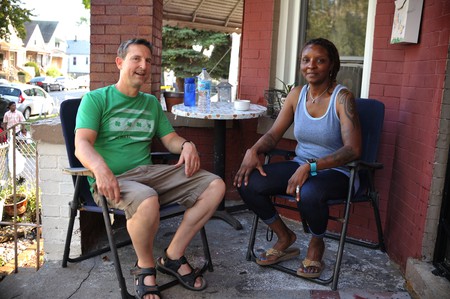 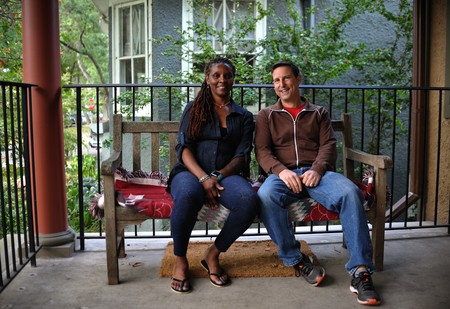 The impact of ‘Folded Map’

The response to Folded Map was overwhelmingly positive. Outside arts and entertainment, Johnson felt her exhibition was a unique spot for people who would normally never interact to bump into each other and bond over geography.

“Chicago’s segregation is not a true reflection of our longing to connect,” says Johnson. “It’s not how we actually want to be.”

She also notes that it’s important to address the unspoken bias that people aren’t supposed to go to certain parts of the city because of who they are. It’s easy to assume that a person’s ethnicity, race, sexual orientation or upbringing determines where they should live in Chicago, because it’s always been so divided.

Johnson is happy to report that it’s not only violence and poverty that pop up in the Google search results for Englewood. She intentionally introduced Folded Map using the neighborhood she grew up in because she wanted to challenge the way people – and the media – viewed her home. Drawing attention to the wonderful things happening in and around her neighborhood was significant to her. (Fun fact: LUMA is Englewood’s Map Twin!)

“I don’t recall a photo project from a person of color receiving such widespread attention, especially with a focus on Englewood,” she says. She wants her art to reveal the inequalities of the art world and changes the way people see artists. 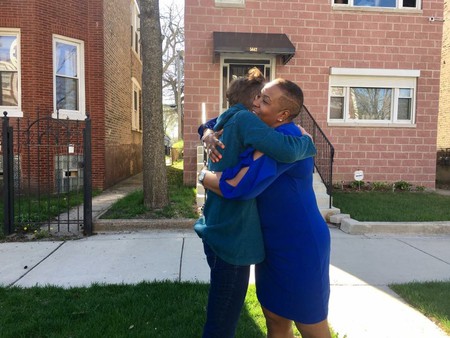 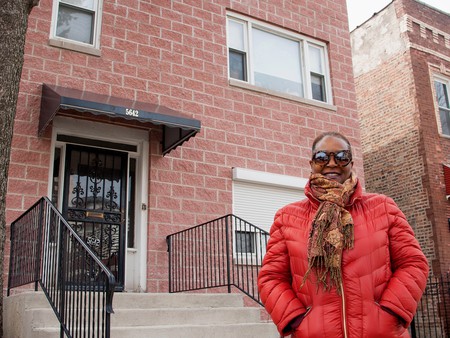 Since the Folded Map exhibition closed in October 2018 (the project itself is ongoing), Johnson has spoken at TedXUofIChicago and Chicago Stories: Unpacking Segregation in Chicago, a panel discussion hosted by the Museum of Contemporary Photography at Columbia College Chicago. A Map Twin participant who works for Collaboraction Theatre Company helped Johnson adapt her work into a play titled Folded Map, which debuted in January 2019 to sold-out crowds. Johnson now has a West Side Folded Map project in the works – which presents its own set of challenges, as Chicago’s East Side only runs a few blocks before turning into Lake Michigan. However, disparities between the West and East sides are equally as stark as between the North and South sides in some areas, and well worth investigating.

Even if you don’t live in Chicago or your city isn’t on a grid system, it’s possible to embrace the concept, Johnson says. “Who are you talking to to gain information and access how you view your city differently?” she asks. “Why are you insulating yourself?”