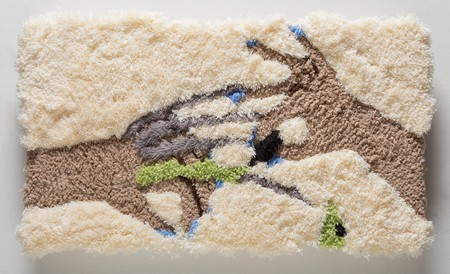 For one artist, Chicago is the inspiration behind her hysterical and poignant works that address sexism, technology, and the art world itself.

Chicago’s comics and art scenes both played significant roles in the artistic development of Jessica Campbell, a Canadian artist and humorist based in the Windy City. Four years after graduating with an M.F.A. from SAIC, Campbell now bounces between creating textile collages in her studio and drawing a regular comic featured on Hyperallergic.com, among other artistic pursuits. She recently released her second graphic novel, XTC69, and has an exhibition opening this winter at Chicago’s Museum of Contemporary Art.

Jessica answered some questions about her work, Chicago, and the journey to the MCA.

Why did you choose Chicago and SAIC?

I had been living in Montreal where I was working in publishing and had gone to undergrad. Coming to the United States for graduate school seemed like the only way I would have an opportunity to live outside of Canada. The interdisciplinary nature of [SAIC] meant that I was able to explore new media in a way that might have been discouraged if I’d gone to grad school in Canada, where programs seem to be a bit more conservative (about disciplines, at least). 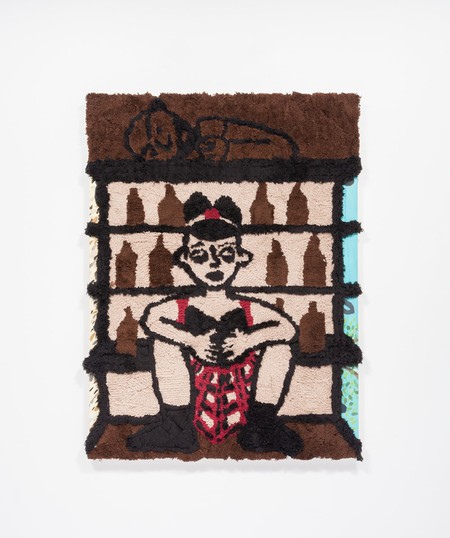 I like the diversity of Chicago, and I’m a part of an enormous community of artists here who are phenomenal and inspire [and] challenge me to make better work. My friend [and] fellow Chicagoan Nick Drnaso’s book Sabrina was just long-listed for the Man Booker Prize, the first time a comic has ever been on the list! It’s people like him and my husband, the great cartoonist Aaron Renier, who really inspire me to make better work.

How has living in Chicago inspired or influenced your artwork?

Being part of a community of really dedicated, thoughtful artists is a huge inspiration. In addition to the community of artists, there are also great institutions here, like the Art Institute or the MCA, but also artist-run centers, commercial galleries, bookstores, [and] festivals like the Chicago Alternative Comics Expo. Chicago is a large enough and vibrant enough city that you could conceivably only go to comics events and still have a robust social life and community.

My upcoming show has to do, at least tangentially, with the 1933 Chicago World’s Fair, so I’ve been diving into research about that event, which has increased my love for the city. Teaching comics history has also really made me appreciate this city. Certainly, it is a great city for contemporary cartoonists: Chris Ware, Ivan Brunetti, Nick Drnaso, Lilli Carré, Anya Davidson, Keiler Roberts, etc. But it was somewhat surprising to me to discover that this is not a recent phenomenon. There have always been great cartoonists living here, like Frank King (Gasoline Alley) and Chester Gould (Dick Tracy).

In addition to this, Chicago was home to the first-ever color newspaper press which, it could easily be argued, is the entire reason that the medium of comics exists in its contemporary form.

What types of work are you planning for the MCA exhibition?

There are two galleries at the MCA that are used for Chicago works. In one, I’m going to have a large carpeted mural with panels that are formally based off of Giotto’s Scrovegni Chapel. 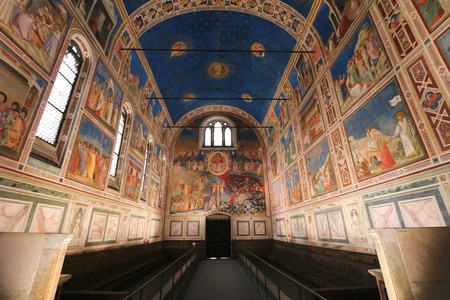 The Scrovegni Chapel in Padua, Italy, painted by Giotto around 1305, depicts life cycles of Christ and Mary in panels on the walls and ceiling. | © Juan Antonio Segal / Flickr

In the other gallery, I will have a series of drawings, [a] carpet, and a comic book. These works will all be loosely based around the life of the Canadian modernist painter Emily Carr, the most famous artist from my hometown (Victoria, British Columbia, Canada), who also worked briefly as a cartoonist and made hooked rugs. [My drawings will be] primarily focused around the single trip that Carr took to Chicago in 1933, when she came to see the Century of Progress exhibition at the Art Institute of Chicago [as part of the World’s Fair], which actually closed the day before she arrived.

I see the Scrovegni Chapel’s narrative paintings as a precursor to the medium of comics, so using that form for the walls and then having a comic that responds to the installation is a way for me to blur the divisions that we’ve made between different artistic disciplines and point to older traditions. 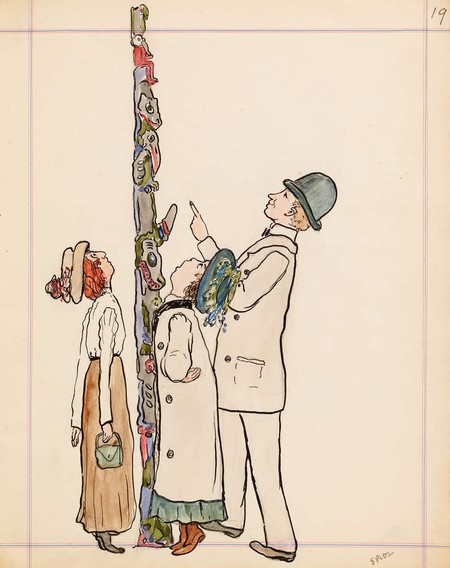 All of the above! I do some gag cartoons [and] strips, which tend to be exaggerated autobiographical situations. Characters who look like me [or] have my name have appeared in most of my work, but, particularly in my books, these characters are playing roles.

What inspired you to create rugs and work with textiles?

Starting to work with rugs was a bit of a journey. I began by making brick wall rugs for the floor, to accompany drawings in exhibitions, and I liked the act of making a hard and firm object out of a soft, mutable material. Making images out of them was the next logical step, and I was taken by how the material is forgiving of errors [and] hides how [the rugs] are made, but is still quite tricky to work with. 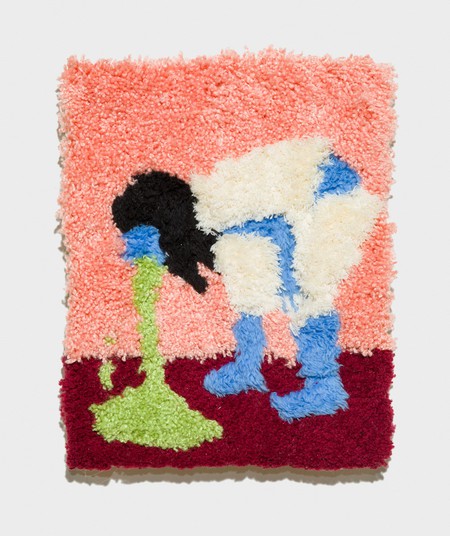 For the upcoming exhibition, I am thinking a lot about carpeted walls and latch hook rugs, both of which have strong connotations of class and time period, and seem discordant with works in a museum. Recreating the form of a fresco, an extremely longevous medium with a historical relationship to very wealthy institutions and serious subject matter, in carpet sparks the same kind of emotion in me that the earlier, simpler act of making bricks out of rugs did.

Do you think you face particular challenges working in graphic novels, cartoons, and science fiction that your male counterparts may not?

The field of comics has changed radically in the past decade, in my opinion. In general, I do not feel like gender is an impediment in working in that field, particularly today, though there is a tradition in comics of making pretty, er, problematic work.

In doing research for my upcoming exhibition, I’ve been looking at a lot of cartoon representations of the 1933 “Century of Progress” World’s Fair in Chicago, and almost every single cartoon about the fair is about seeing a woman’s top fall off or something. That has nothing to do with the content of the fair, but more to do with the tradition of cartooning and what would have been expected at the time. Cartoons are meant to be stupid, ephemeral entertainment, and what could be more entertaining [or] titillating than a woman’s top falling off? 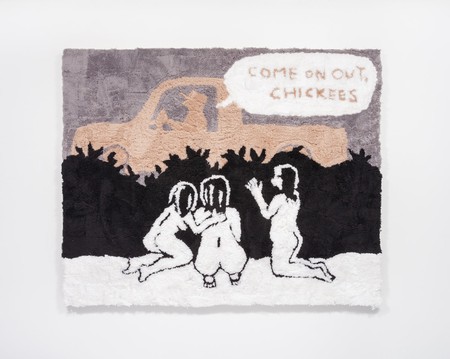 This, of course, is not how the medium functions today, for the most part, but it is ingrained in the history in the same way that minstrelsy is. Sometimes cartoonists will try to harken back to an earlier form of cartooning by adopting sexist and racist depictions and content, which I think is problematic. We need to acknowledge those histories while simultaneously demanding that contemporary artists do better.

Interestingly, when [XTC69, my most recent graphic novel] was published in May, several of the reviews brought up specific male science-fiction writers whose work reviewers thought I was reacting to, but I had never heard of them! Most of my science-fiction knowledge comes from Star Trek.

What do you love most about Chicago’s art scene?

I think there is a scrappiness and lack of pretension here that is deeply admirable. Artists especially are extremely dedicated while remaining supportive of one another and maintaining a sense of humor.

Be sure to check out Jessica Campbell’s newest works on display at the Museum of Contemporary Art, running December 19, 2018, through July 7, 2019.