With a comedy club on seemingly every corner, Chicago is the place to be if you want to spend your evening laughing. Walk the streets of Chicago on any given night, and you’ll likely see dozens of comedians on their way to an open mic, where you’re bound to find fantastic free entertainment.
The Annoyance Theatre
Theater 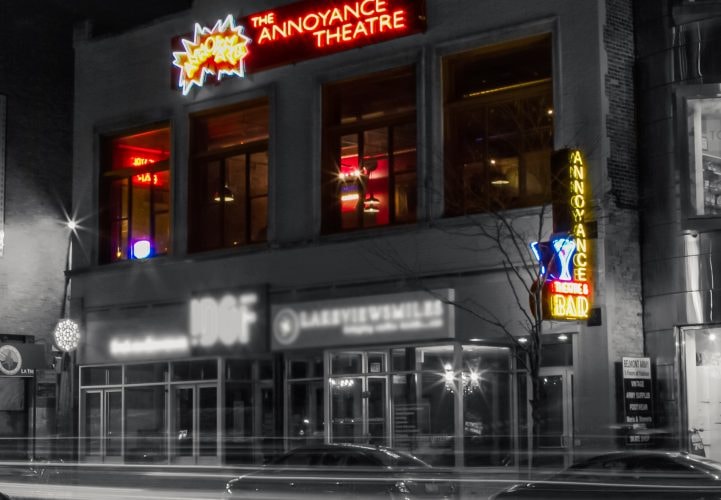 Located in the heart of Lakeview, just a few doors down from the Belmont L train stop, the Annoyance Theatre is a great place to see a few hours of Saturday night stand-up. Their open mic runs from 9:30pm to midnight, with comedians signing up to perform around 9. Set inside a small theater, the show creates an intimate, yet still professional, feeling between performer and audience. For those interested, the Annoyance Theatre also offers improv shows and classes throughout the week.

If you need to cure your Monday blues, let the vast, diverse group of comedians at Town Hall Pub make you laugh. Located in Boystown, Town Hall Pub is a small, cozy bar with couches, tables, and a small stage set up for performers. The open mic starts at 9:00pm, with comedians signing up around 8:30. Town Hall Pub attracts a lot of comedians, sometimes around 40 in one night, so you’ll get to see a lot of different styles of comedy all in one place.

If you’re frequently in the mood for a fun, high-energy open mic, you should become a regular at Patsy’s Pub & Grill. Patsy’s offers two open mic nights each week: one on Tuesdays at 8:30pm (comedians sign up at 8:00), and one on Fridays at 11:00pm (comedians sign up at 10:30). Patsy’s tends to attract a lot of energetic comedians and an enthusiastic audience, so get ready to laugh. They also have a good alcohol and bar food selection, and they keep their kitchen open until 1:00am during the Friday open mic.

For those wanting a coffee shop rather than a bar atmosphere, Evanston’s top open mic spot, Kafein, is the place to go. Kafein’s open mic offers a nice variety of entertainment, since it encourages performances by both comedians and musicians (and sometimes even a combination of the two). You can also enjoy one of Kafein’s flavored lattes or specialty milkshakes while watching a few hours of free entertainment. The open mic begins at 7:00pm on Mondays, with performers signing up around 6:30pm.

Just a few doors down from the Annoyance Theatre, ComedySportz is a great place for some Monday night entertainment. ComedySportz’s open mic, called The Chaser, follows their professional stand-up show, 100 Proof Comedy, which starts at 8:00pm. Comedians can start signing up for the open mic at 7:30pm, with the show beginning at 9:30pm. With a bar right outside the theater, ComedySportz offers a true comedy club atmosphere, complete with a large stage and tables where audience members can sit and enjoy a drink while they laugh.