An Introduction To Fall Out Boy In 10 Songs 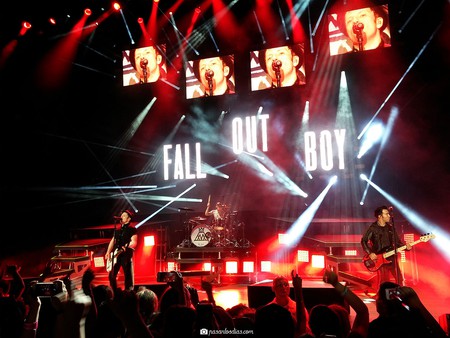 The pop punk band Fall Out Boy started off as a side project from Chicago’s small hardcore punk scene in 2001 for members Pete Wentz and Joe Trohman. Patrick Stump was added early on, and drummer Andy Hurley joined after a string of other drummers. The band had their major-label breakthrough during the emo pop era of the mid-2000s with the album From Under the Cork Tree.

From the band’s first studio album Take This to Your Grave, the song ‘Saturday’ is still a fixture of Fall Out Boy’s live shows and is even the band’s typical set-closer. The song is a fan favorite with holdovers from the band’s earlier sound, including Wentz’s distinct scream towards the end.

‘Sugar, We’re Goin Down’ was lead single from the band’s breakthrough album From Under the Cork Tree and served as the band’s introduction to a wider domestic audience. It was their first song to reach the US Billboard top ten chart at its peak and went on to reach 4x Platinum certification.

The band’s second single from the album From Under the Cork Tree, ‘Dance, Dance’ became Fall Out Boy’s second consecutive top ten hit. The single achieved 3x Platinum certification and won a Viewer’s Choice award at the MTV Video Music Awards. Composed by Stump with lyrics by Wentz, the song features a strong, rhythmic bass line; Stump has remarked that he thinks ‘Dance, Dance’ was ‘probably the best thing I’ve ever done.’

This Ain’t a Scene, It’s an Arms Race

Written by Stump and Wentz in the aftermath of their sudden celebrity, and the first single on the sophomore album, Infinity on High, this track is seen by many as a response to the band’s frustrations with creating music in an environment more obsessed with fame and money. The song’s release coincided with the band finding international fame, topping the New Zealand charts and coming in at number two in the UK.

The second single from the Infinity on High, featured a ‘disemvowelment’ of the title as a tongue-in-cheek move by the band in response to their record company asking them to shorten their often wordy song titles.

With lyrics like ‘I don’t care what you think, as long as it’s about me,’ ‘I Don’t Care’ might be the band’s most scathing critique of the self absorption found in pop culture. The song makes an ironic anthem out of the pursuit of the superficial, turning the anthemic nature around on those that would sing along without reflecting on the song’s meaning. ‘I Don’t Care’ was part of the band’s Folie à Deux album, their last before going on hiatus.

Fall Out Boy was on a hiatus between 2009 and 2012 before secretly regrouping and working on a new album, Save Rock and Roll, which was released in 2013. The lead single, ‘My Songs Know What You Did in the Dark (Light Em Up),’ achieved triple-platinum certification in the USA.

‘Centuries’ was the lead single from Fall Out Boy’s 2015 album, American Beauty/American Psycho. The song is meant to invoke a sort of David and Goliath story, a point made more explicit in the song’s music video when the band works together to make a slingshot to take down a large and seemingly unstoppable gladiator.

Another single from the American Beauty/American Psycho album, ‘Uma Thurman’ draws its title and chorus from Thurman’s iconic Tarantino roles, including the dance scene Pulp Fiction and sword fighting in Kill Bill. The song samples The Munsters’ theme song with an electric guitar riff and baritone sax line, paired with a funky bassline.

Wentz has referenced the destructive romance of Sex Pistols band member Sid Vicious and girlfriend Nancy Spungen as seen in films as a major inspiration for the song, remarking that ‘Sometimes it’s hard not to love what can hurt us the most.’ Singer Demi Lovato is featured in both the song and music video with the band acting as living dolls, a reference to *NSYNC, with former members of the boy band featured in the video as well.