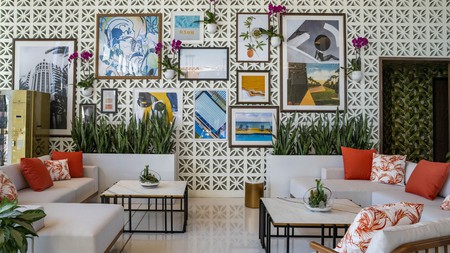 On the Atlantic Coast, just 29mi (47km) north of Miami, Fort Lauderdale was once known as an exuberant Spring Break center. Today, that overt hedonism has largely given way to a comparatively easy-going atmosphere, but the seemingly endless sunshine, intricate canals and Barrier Island’s glorious beaches remain unchanged. There is now a luxury vibe to this part of town and the Venice of America is a yachting and vacation hub, drawing high-end holidaymakers from across the US and abroad. Read Culture Trip’s guide to the city’s top luxury properties. 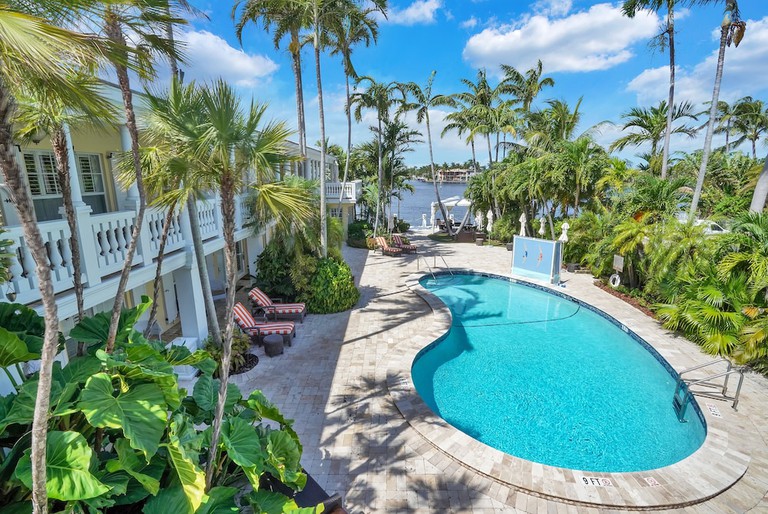 Courtesy of The Pillars Hotel / Expedia
View Rooms
Colonial chic meets mod cons in this supremely elegant two-story villa dating to the 1930s. In keeping with its refined character, the property faces the Intracoastal, a vast marina-dotted waterway separating the Barrier Island from the mainland. Guests are more likely to spend days out on the sun decks of passing yachts than on deckchairs on the nearby beach. Stylish rooms and suites feature white and cream palettes with desks and Nespresso machines, and the fine dining restaurant completes the picture.
More info 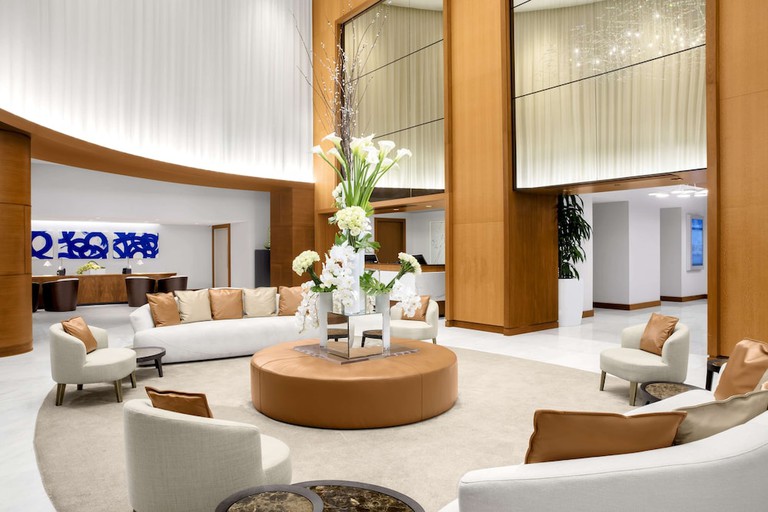 Courtesy of Riverside Hotel / Expedia
View Rooms
Overlooking New River and 2mi (3km) back from the ocean along trendy Las Olas Boulevard, Riverside’s imposing 1930s mansion-block with turquoise-roofed towers oozes Old Florida style and pizzazz. Along with its more modern executive tower, this is a substantial property with an array of retro-tinged rooms and suites. A heated pool with food and drink service stands alongside the river and the hotel’s private boat moorings. The Boathouse restaurant occupies a separate building amid tropical trees and shrubs, with fine views across the river.
More info 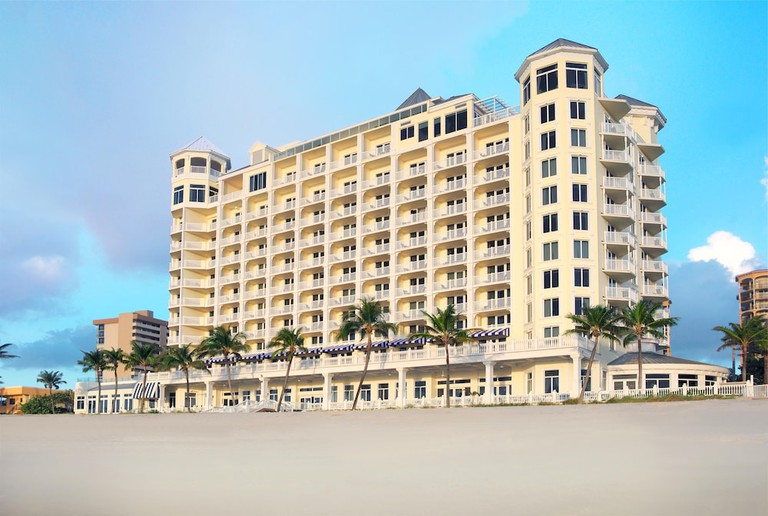 Courtesy of Pelican Grand Beach / Expedia
View Rooms
Just beyond the northern tip of Hugh Taylor Birch Park, the Pelican’s gleaming pale-yellow facade seems to reflect the glorious sands over which it looms. A recent refurbishment has upped its game and helped clinch several awards. The lobby and public areas exude a classy retro feel (think wingback chairs and deeply molded ceilings) that is almost at odds with its exterior, while most rooms suggest boho-tinged beach chic. A 500-ft (152-m) private beach is staffed by attendants and waiters and there’s a good spa to help tease the sand from your toes.
More info 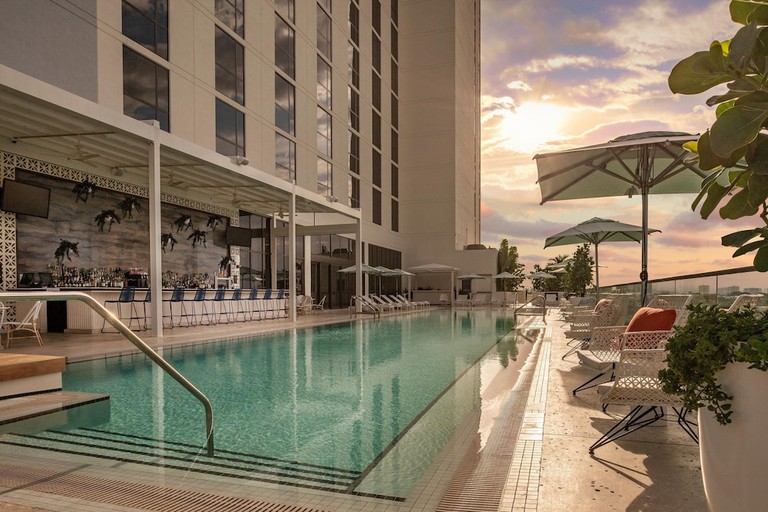 Courtesy of The Dalmar / Expedia
View Rooms
This angular skyscraper near trendy Las Olas Boulevard typifies a new breed of luxury downtown properties. Its modern rooms, some with floor-to-ceiling windows and stripped floors, generally have earthy muted tones but the bars and restaurants exude a much bolder, almost playful, style. The rooftop Sparrow bar’s fun ’60s vibe is beautifully offset by the Terrace Grill’s monochrome fin de siècle pastiche. The rooftop pool has its own pergola-covered bar.
More info 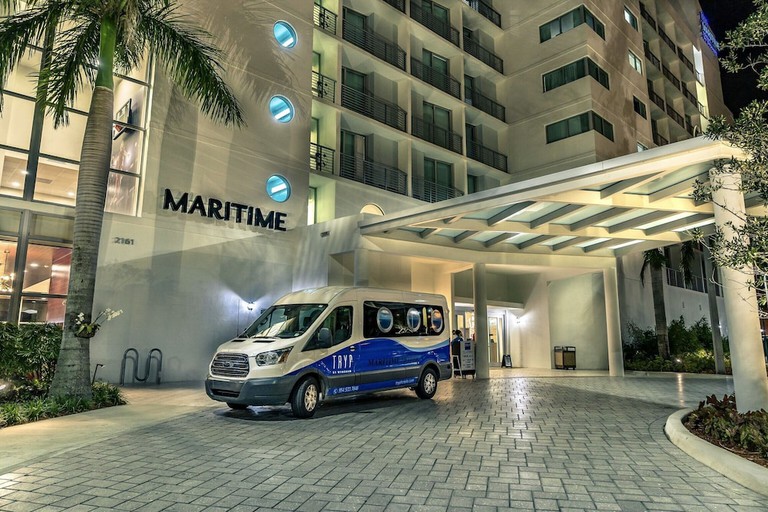 Courtesy of TRYP by Wyndham / Expedia
View Rooms
Nautical accents and motifs – from porthole windows to bold blue furnishings and undersea imagery – set the tone for this modern hotel close to Lauderdale’s airport. It’s more of an upmarket convenience hotel than a destination property, but very useful for guests connecting with cruises, flights or attending conventions. Unless you have a yacht moored on the nearby South Fork New River, it’s not particularly practical for any of the city’s sights or attractions.
More info 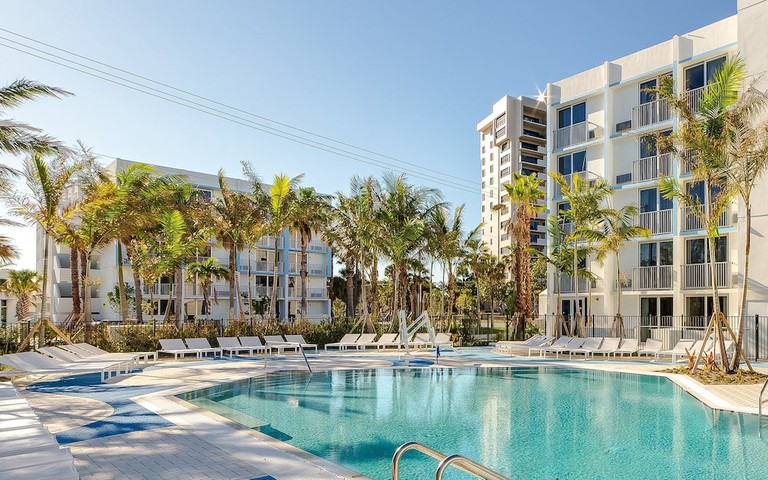 Courtesy of Plunge Beach Resort / Expedia
View Rooms
With its Old Florida vibe, Lauderdale-on-Sea is now a northern suburb of the city, yet it retains echoes of its own town-like character. Plunge reflects that slightly understated bohemian ethos in a neat cluster of low-rise palm-fringed buildings overlooking the beach. Room decor has playful nods to youthful hip-surf culture and you might just get curious looks if you’re not imbibing barefoot at the sea-facing tiki bar. The Bungalow accommodation offers direct access to the beach.
More info
Give us feedback