The Top 10 Things To Do in San Francisco's Chinatown 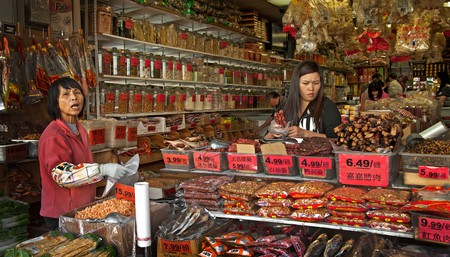 In addition to being the largest and oldest Chinatown in the US, here are 10 other reasons why you can’t miss this neighborhood while visiting San Francisco.

Chinatown’s sweeping architectural flourishes, array of glowing lamps, and glowering guardian lions are the blueprint for many of the other enclaves of diasporic Chinese culture that flourish around the globe. It’s rich in history and, despite its relatively compact area, full of activities that any traveler should prioritize on their journey through San Francisco.

Get an egg custard tart

Egg custard tarts are a Chinese delicacy: silky, soft, not oversweet, and with a flaky crust. Golden Gate Bakery on Grant is widely recognized as having the best tarts this side of the Pacific, with long lines to match. The bakery has other items, like gooey sesame balls and coconut macaroons, but the egg custard tart is why people wait an hour-plus in the rain for their chance to order. Beat the lines by getting there when they open at 8am or roll the dice and show up before they close at 8pm. Just be ready to order by the box, because there’s no way you’re going to want just one. 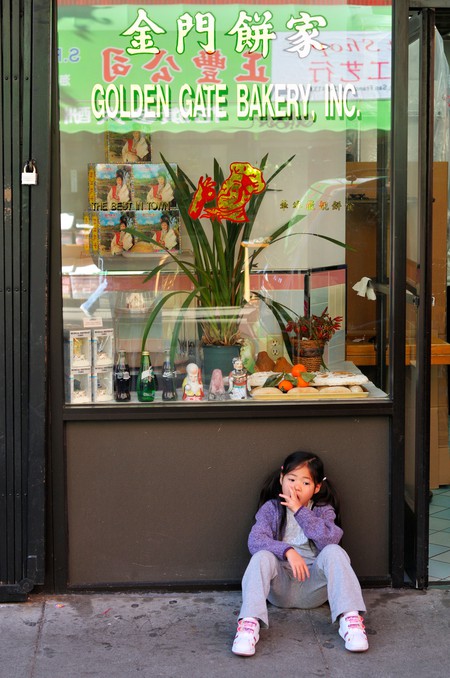 Chinatown is basically famous for its array of stalls and shops that sell cheap tchotchkes. These are fun, and make an easy gift for the folks back home, but there’s some seriously unique shopping to be had near the main thoroughfare called Grant Avenue. Various multi-story businesses offer antique furniture, which is cool to look at but a little impractical to bring home cheaply. For a more meaningful and transportable memento, head over to Chinatown Kite Shop for a high-flying keepsake that will be as fun as it is beautiful. The Wok Shop is another great stop for souvenirs. Pick up a wok, or get a little bold and amp up your homemade foodie game with everything from a hot pot to a bamboo steamer to a wasabi grater. 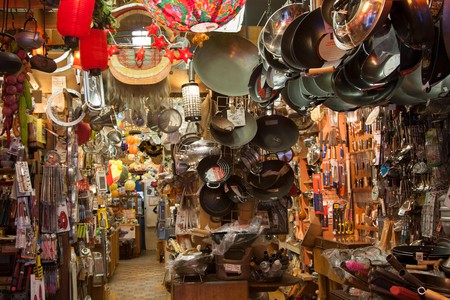 Chinatown is as old as the city of San Francisco, and one of the hallmarks of that age is the Tin How Temple on Waverly Place – the oldest of Chinatown’s three temples (one of the oldest in the United States, even). It’s dedicated to Mazu, the Taoist goddess of the sea, as a way for Chinese immigrants to pray for safe passage across the Pacific between their homeland and the North American continent. The temple’s architecture is exquisite and it’s an essential stop for anyone who needs a moment of respite from the hubbub outside. Visitors are welcome, but asked to respect the quietude of worshippers and to refrain from photography. 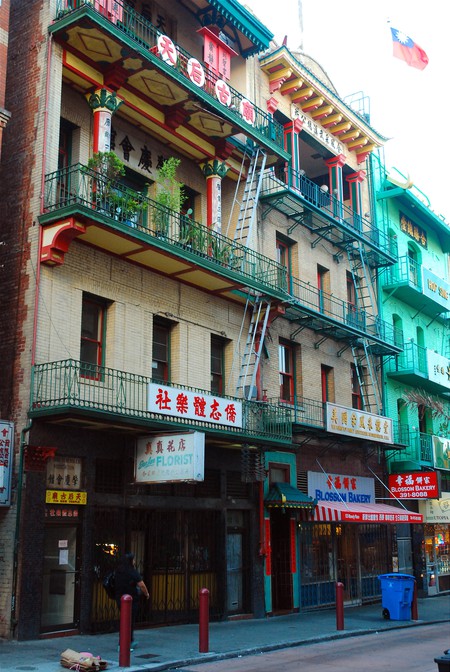 If it’s late and you’re in Chinatown, you should head toward North Beach and check out one of the karaoke bars near Columbus. The atmosphere is on the divey side, but drinks are usually cheap and the crowds are all just looking to relax and have a good time. Bow Bow Cocktail Lounge is the place to go if you want to get groovy and sing your heart out, while Mr. Bing’s and Red’s Place are also nearby and sometimes have karaoke going on. 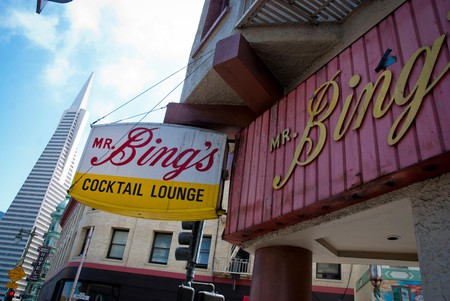 Peking Duck is a storied dish from Beijing that’s been prepared for emperors and special occasions for centuries. Bottom line: It’s an important dish that, for anyone who likes duck, is a total must-try. San Francisco’s Chinatown has an abundance of restaurants that offer this crispy, succulent meal, all of which are worth a try. Hunan’s Home Restaurant is often cited as one of the best, alongside other mainstays like Sam Wo Restaurant. 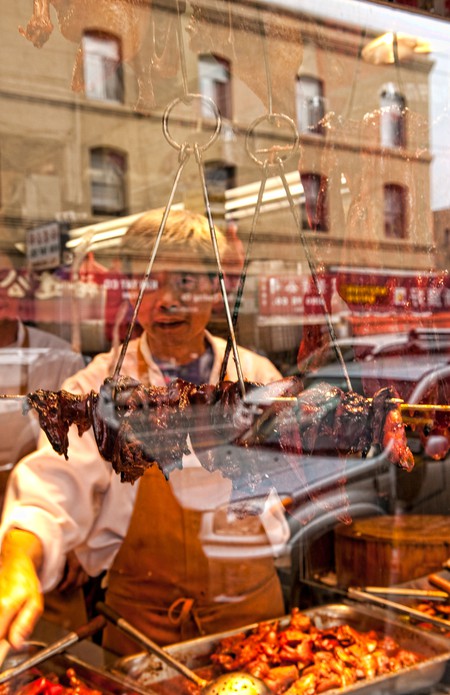 There’s plenty of tea shops around Chinatown to guarantee your caffeine fix at a moment’s notice. Most of these are chains, but Red Blossom Tea Company on Grant is a neighborhood original. They opened thirty years ago as an apothecary under the name Yau Hing, meaning ‘to flourish again.’ Today, Red Blossom specializes in quality teas and provides tastings that help shoppers understand the subtler difference between their product and Nestea. Free taste tests are available to sample the quality of specific varietals and their expert tea slingers will create a personalized flight of brews for just $35 per person. 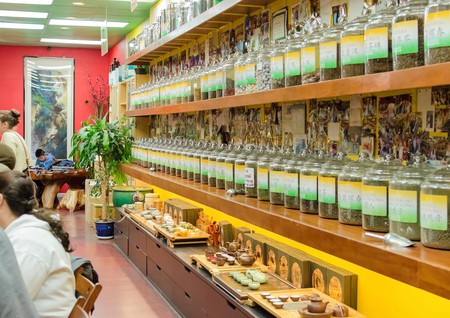 Chinese New Year is firmly in the ‘worth it’ column. The music, colors and sheer overwhelming sense of celebration is tantamount to a life-affirming experience. Not to mention, of course, the lion dancers and dragons and all sorts of other amazing puppetry that characterize the height of the festivities. Chinese New Year is huge in San Francisco, and if you want to be a part of the celebration you need to get your hotel and flight booked well in advance. 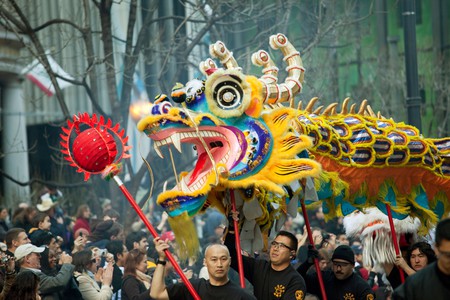 San Francisco has a pretty enormous place in cocktail history as one of the epicenters of Tiki culture (or, Polynesian Pop for liquor historians out there). The Mai Tai was invented across the Bay at Trader Vic’s before spreading across the world to become the most prominent example of South Pacific-inspired, rum-based libations. Li Po Cocktail Lounge in Chinatown puts its own spin on the Bay Area original with lychee liqueur. It’s a strong concoction with a neat twist that’s a steal for $11. Plus, Anthony Bourdain thought the drink was great, so that’s probably all you need to know. 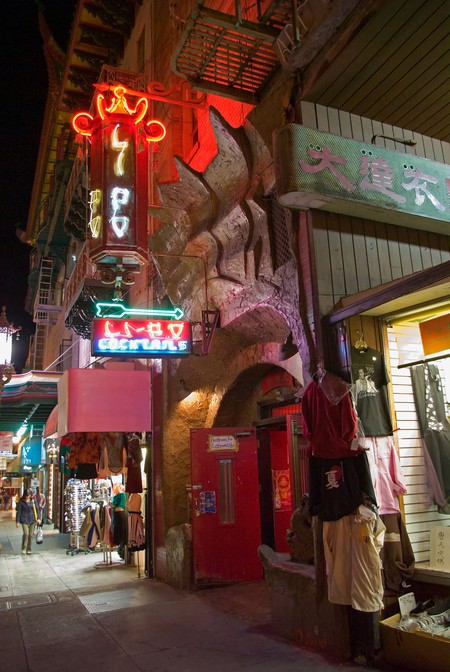 Fortune cookies are, of course, not necessarily an authentic part of Chinese cuisine, but they have become a large part of Chinese-American culture. Chinatown just so happens to have a fortune cookie factory where they pump out those little suckers by the metric ton. The Golden Gate Fortune Cookie Factory is an iconic part of the neighborhood that welcomes visitors for tours (so long as you call ahead and make a reservation) that show you everything but the secret recipe. The tour is cool, but the gift shop is where the magic happens. That is, magic in the form of customizable fortunes. Get 100 customized cookies for just $35, or 50 for $17.50. 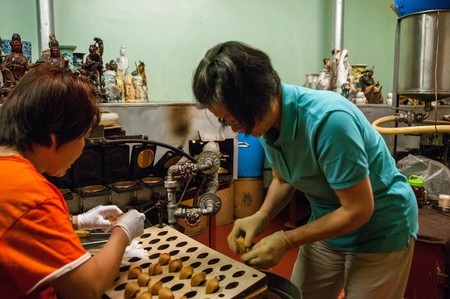 This postcard staple is one of the most iconic images of Chinatown. Erected in 1970, local architect Clayton Lee designed Dragon Gate as an homage to traditional gates (called paifang) at the entrances to towns and villages in China. The Republic of China donated the materials, giving Dragon Gate a solid claim as the only authentic paifang in North America. There are three ways to enter the gate: a large middle passage for vehicles and smaller pedestrian byways on either side flanked by traditional lion statues. The left lion is a male with his paw on a pearl, symbolizing the empire, and the right lion is a female with her paw on a cub, symbolizing family. 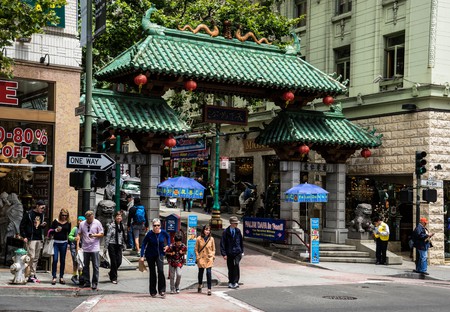