How To Spend a Day in Beverly Hills 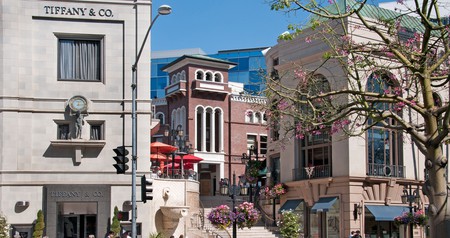 With its lavish homes, wide boulevards teeming with luxury autos and outrageously expensive stores, Beverly Hills has been the class to Los Angeles’s sass for over a century. If you’re willing to pack your schedule like a stylist during awards season, it is indeed possible to bask in all the neighborhood’s highlights.

Begin your day at the big pink heart of the neighborhood, The Beverly Hills Hotel. Its throwback coffee shop, the Fountain Coffee Room, is the most glamorous lunch counter in the world – all gleaming glass and chrome and painted palm fronds waving from the walls like adoring fans. Dine starlet-style on egg whites and turkey burgers or more decadently on a hot pastrami sandwich with dijon mustard and sauerkraut. 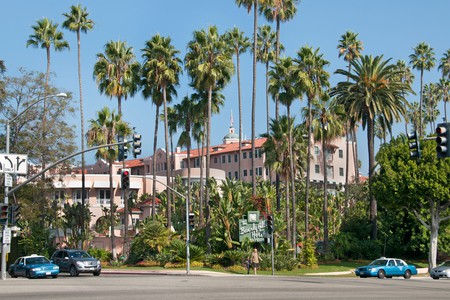 Since we’re in Los Angeles, there’s going to be a little driving. Head to the corner of Crescent Drive and Little Santa Monica Boulevard and fuel up at the Union 76 Gas Station, a still-functioning example of high Googie architecture; its roof sweeps towards the sky like a sail or shark fin. Pump in a few gallons, pick up some snacks and hit the road.

The Greystone Mansion has been featured in numerous films including The Big Lebowski, There Will Be Blood and The Social Network, and the beautifully landscaped grounds are open to the public daily. Beverly Gardens Park, which runs for two miles (3.2 kilometers) along Santa Monica Boulevard, is a landscape of fountains, sculptures and rose gardens enjoyed by local people and tourists alike. 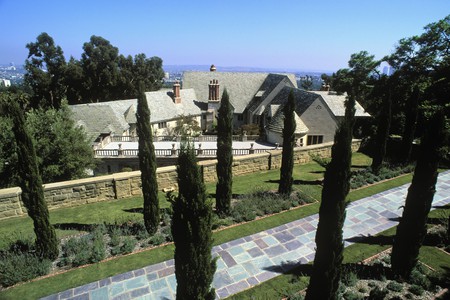 If you’ve got it, flaunt it, and flaunting it is what Rodeo Drive is all about. Among the luxury boutiques on the palm-lined shopping street are Balenciaga, Bulgari, Versace and Valentino. Even if you’re not quite up to spending $12,000 on a purse, you can still gaze in the windows and contemplate which Tiffany bauble or bit of Gucci would best suit you.

For lunch, visit the king of Los Angeles celebrity dining: Wolfgang Puck’s Spago. The Austrian chef opened his first LA restaurant over three decades ago and has become such an institution that he even caters the Academy Awards’ official after-parties. While Spago’s location may have changed, some things remain eternal, like Puck’s wagyu steak, smoked salmon pizza, and the appearances by names that get printed, in bold, in the gossip columns.

The Frederick R Weisman Art Foundation preserves the modern art collection of businessman and philanthropist Frederick Weisman in the home where it was displayed. The sprawling Art Deco villa and annex are full of pieces by Picasso, Kandinsky, Magritte, Warhol and Rothko, among many others. The villa and art can be viewed during twice-daily tours by appointment. 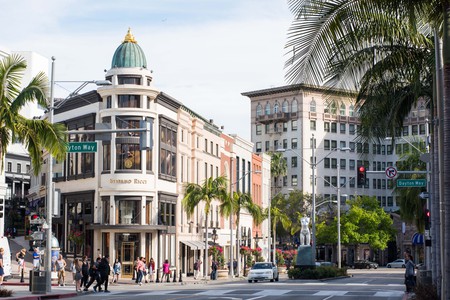 Start the evening with an extravagant libation at the £10 Bar. Located in the stylish Montage hotel, the elegant, wood-paneled bar stocks the rarest (and most expensive) whiskeys in the world. What says living large more than sipping Macallan out of Lalique?

Afterward, dine at one of the neighborhood’s most beloved restaurants. With its white tablecloths, amber lighting and red sauce, Madeo is Beverly Hills’ top spot for classic Italian food. The pasta dishes – from truffle risotto to spaghetti all’aragosta – are standouts, but every dish is top-shelf enough to attract the likes of Al Pacino and Jennifer Lopez. 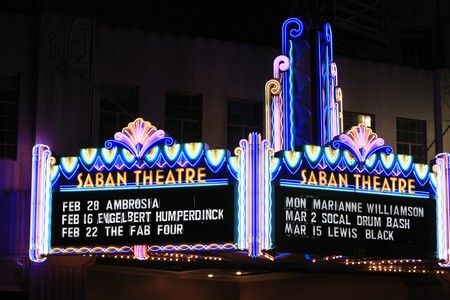 Open since 1930, the Saban Theatre – originally the Fox Wilshire Theater – hosted premieres over the years for films like The African Queen, Sleeping Beauty and The Sound of Music. It was renovated into a concert venue in 1981, but its sleek design remains intact. The Saban mostly hosts veteran acts like The Temptations, Air Supply and Rick Springfield.

If you’re feeling late-night peckish, drop by the cupcake ATM at Sprinkles and pick up a devil’s food or red velvet on your way to your Beverly Hills bed. The Avalon is an intimate hotel centered on an hourglass-shaped pool and decorated in an updated Hollywood-Regency style. Stars like Leonardo DiCaprio and Tilda Swinton have stayed here; Marilyn Monroe maintained a room in the hotel around 1950 when it was the Beverly Carlton. Rooms are spread out across three buildings, and each has a unique layout and decor. Rest your head, close your eyes and tell yourself that today was not a dream. 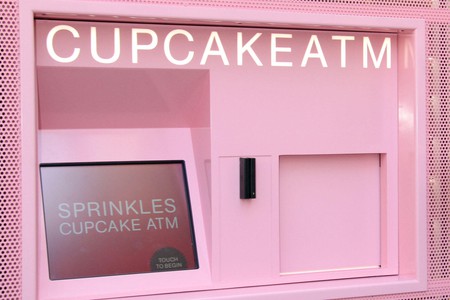