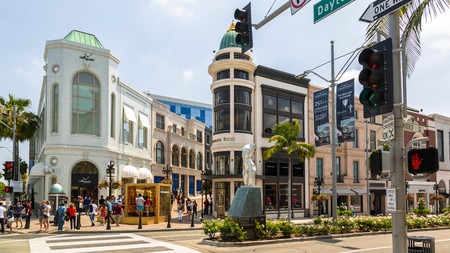 Home to Rodeo Drive and many of Hollywood’s most famous faces, Beverly Hills is renowned as a place of luxury. A stay here will ensure a hotel that matches the grandeur and glamor of the star-studded mansions lining the boulevards of Los Angeles. Here’s our pick of the best places to stay in Beverly Hills. 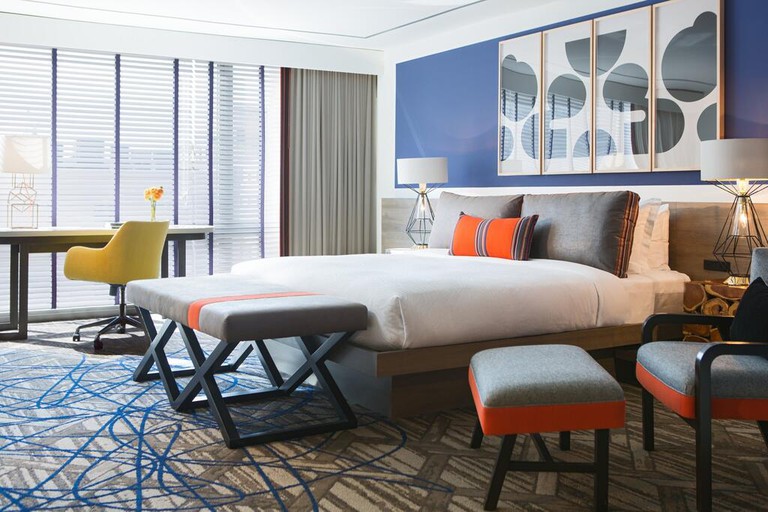 This low-key accommodation option feels as much like a private residential block as it does a hotel. Communal spaces have a familiar and comfortable feel – a positive change from the sterile lobbies and business centers that can be found in Downtown LA. The “backyard” pool offers respite from the intense LA heat, while the surrounding sun loungers provide an idyllic means of lapping up as much sun as you can get. In-house eatery Double Take ensures you start the morning right with a fresh California-inspired menu – which will especially appeal to the avocado aficionado – and also shakes up a range of pre-dinner cocktails to kick-start your evening. 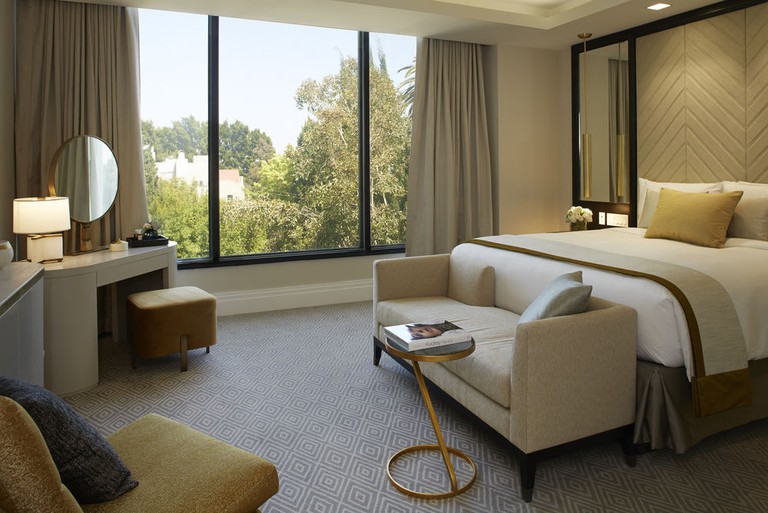 The only thing that’s strikingly “un-London” about this hotel is the beautiful palm tree-lined swimming pool in the back. That, and the fact it basks in year-round sunshine – but beyond this, you’ll spot references to the UK capital behind every corner. Take, for instance, the two resident English bulldogs, Winston and Churchill – they’ll probably be dozing somewhere in the lobby, and your pooch would be welcome to join them if you can’t bear to leave it at home. Beyond its pet-friendly credentials, the London is a sophisticated hotel that knows how to make guests feel well looked after. The concierge service is renowned, and the rooftop pool is a hotspot for fruity cocktails and striking Hollywood views. 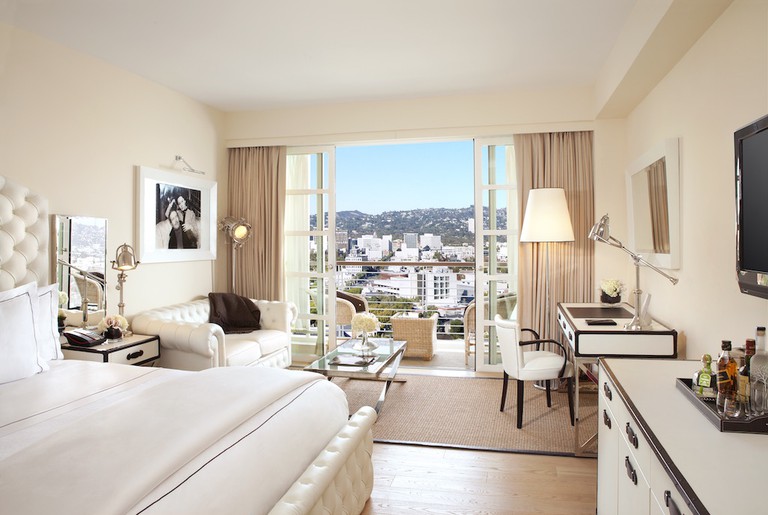 Courtesy of Mr. C Beverly Hills / Hotels.com
Owned by the renowned Cipriani family, Mr. C is an LA interpretation of traditional Italian glamour. References to the hotel’s home country are everywhere, from black-and-white photos of Italian celebrities in the 1950s on bedroom walls to the Italian-American menu at in-house restaurant Cipriani’s. Rooms all come with balconies that have sweeping views over Hollywood, taking coffee in bed to the next level. To cap off what is sure to be an indulgent stay, head to the spa for a treatment, although be sure to book ahead – with only two treatment rooms it’s an in-demand establishment. 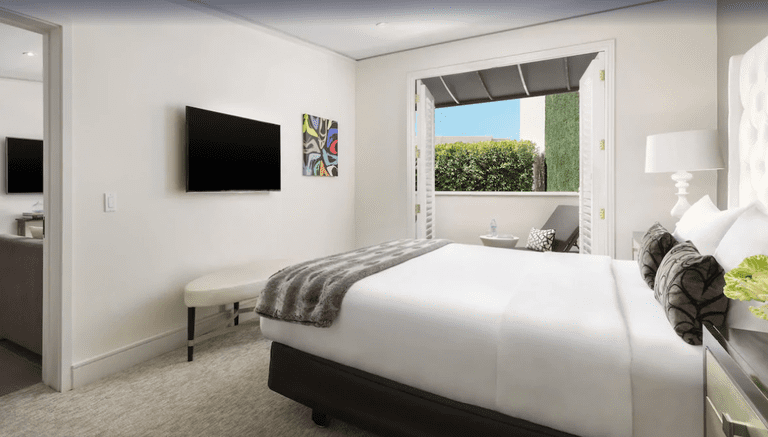 The Mosaic Hotel makes for a more low-key alternative to some of its grander Beverly Hills hotel counterparts. A monochrome and muted gray color scheme characterizes the rooms, while smart business amenities include USB charging stations and an in-house business center. The Mosaic Restaurant serves up contemporary Californian cuisine all day long – you can dine inside or al fresco on the heated patio by the outdoor pool. Lined with cushy sofas that cry out for a sunset drink, this is a secluded spot to settle down with a cocktail or two at the end of the day. 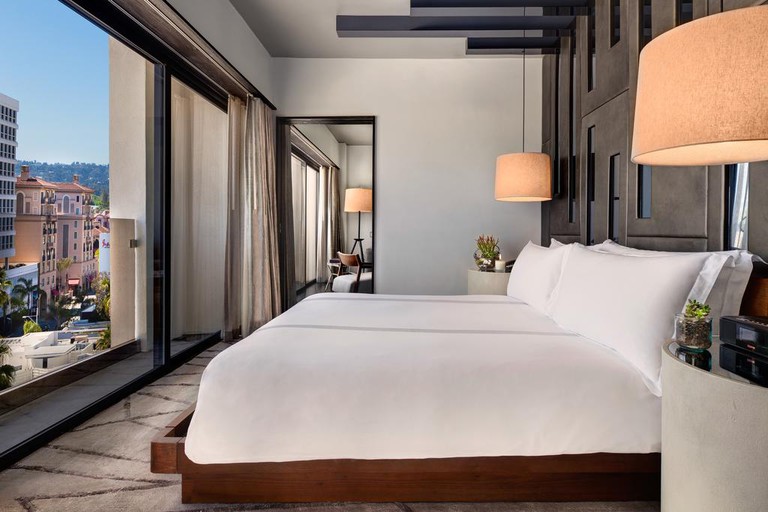 Courtesy of SIXTY Beverly Hills / Hotels.com
This is California cool with a sleek East Coast vibe. Think laid-back 1970s-esque decor, with a sort of metropolitan undertone that makes for a refreshing change in a city that’s all about beach culture. Upon arrival, make your way straight to the rooftop pool – there’ll be a cocktail bar waiting, as well as panoramic views over LA. Sitting back with an ice-cold drink in hand by the water, you could not start your stay in a better way. When you muster the energy to unpack, head downstairs to your spacious room. With its bachelor pad-style vibe and yet more sweeping vistas from your private balcony, you’ll feel confident you’ve made the right choice. 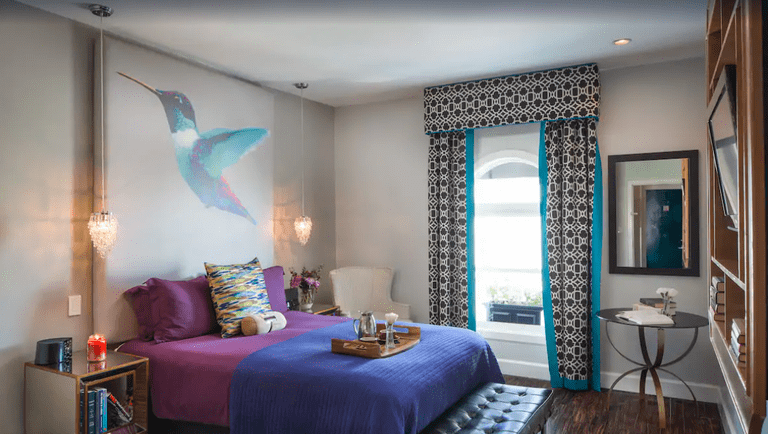 The Crescent Hotel comes with stacks of character. Housed in an Art Deco building, it’s full of visual delights outside and in. The eclectic bar and dining space are packed full of eccentric features such as mirror ceilings, mismatched chandeliers, and a chess set for whiling away a quiet afternoon. The personality doesn’t stop in the shared spaces, either: in your room, you may find your headboard adorned with an enormous painting of a peacock feather, a hummingbird, or a butterfly. A true boutique establishment with only 32 rooms, the Crescent Hotel is a very safe bet for excellent service in an incredible location – with Rodeo Drive only three blocks away, prepare for some serious window-shopping. 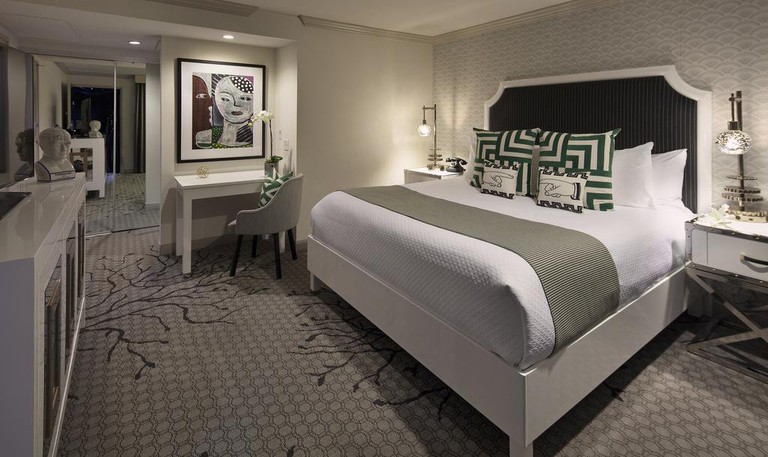 Courtesy of the Carlyle Inn / Hotels.com

With its striking curved exterior, the Carlyle Inn makes a big impression before you’ve even checked in. The art deco touches continue beyond the facade, with black-and-white striped pillars and parasols, and upscale rooms that feature geometric lines, metal finishings, and retro telephones – transporting you back to the 1920s. While there’s no formal bar or restaurant, the hotel does offer a happy hour for complimentary beer and wine, and a continental breakfast buffet in the morning. 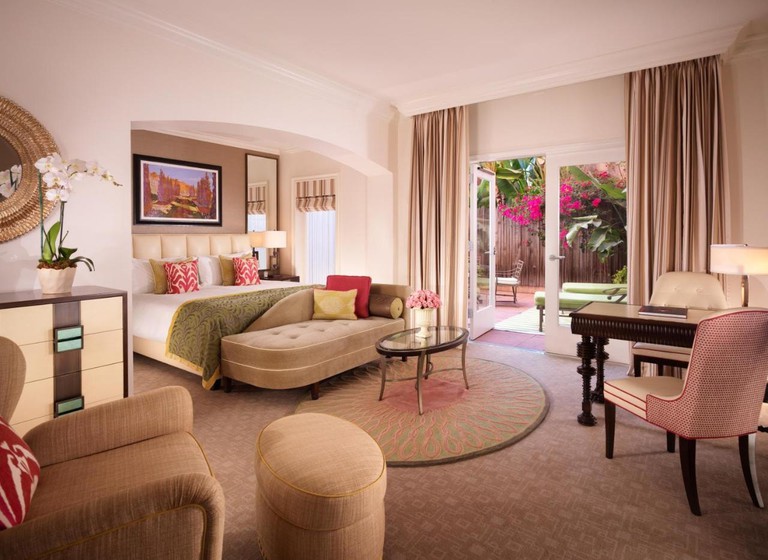 Courtesy of the Beverly Hills Hotel / Hotels.com
With its recognizable peachy-pink paint and cursive white letters spelling out its name, the luxury Beverly Hills Hotel is perhaps the most famous resort in California. Opened in 1912, it has been a favorite among celebrities ever since, including Fred Astaire, Humphrey Bogart, Katharine Hepburn, and Elizabeth Taylor – who spent six of her honeymoons in Bungalow 5. Also known as the Pink Palace, it was featured on the cover of the Eagles’ Hotel California album, and its Polo Lounge continues to be at the heart of many Hollywood deals. Today, the hotel has 208 rooms and 23 bungalows. Its 12 acres (5ha) of luscious grounds also include a pool – heated to a pleasant 82F (28C) – spa and fitness center. 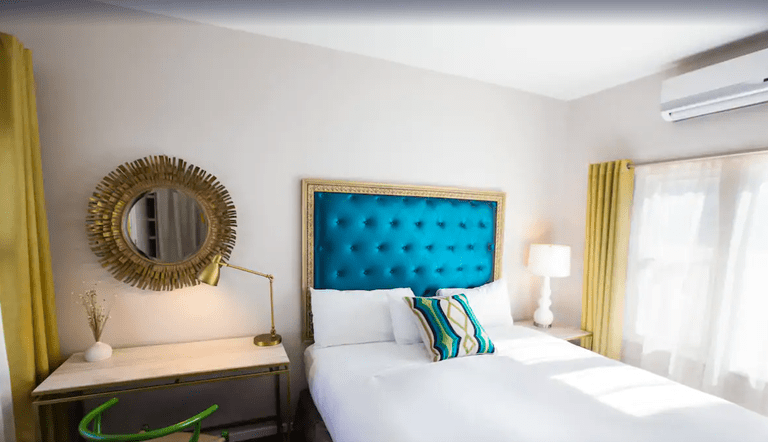 While not as over-the-top as some of the big resorts, Sonder Beverly Terrace provides a more affordable option in a relaxed and comfortable setting. With only 39 rooms, guests receive individualized attention, and the rooftop terrace and garden courtyard offer lush settings to relax in. Guests receive complimentary breakfast at the boutique hotel’s restaurant, Cafe Amici. The Hotel Beverly Terrace is also located close to West Hollywood, offering easy access to both neighborhoods. 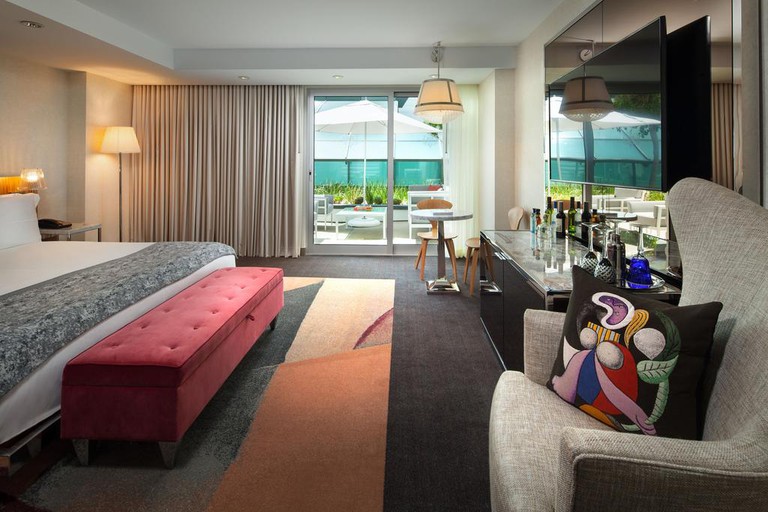 Courtesy of SLS Hotel / Hotels.com
With interior design by Philippe Starck and food by chef José Andrés, SLS Beverly Hills is full of innovative spaces and cuisine that make it one of the best hotels in Beverly Hills. The 5,000sqft (465sqm) and all-white Ciel Spa, for example, creates the sense of a dream within the clouds. Among the hotel’s 297 rooms are six lifestyle suites that include personal gym equipment, as well as hypoallergenic bedding for those prone to catching the sniffles. The rooftop pool offers views over both Los Angeles and Beverly Hills and transforms into an outdoor lounge on summer weekends with DJs providing a deep-house soundtrack. 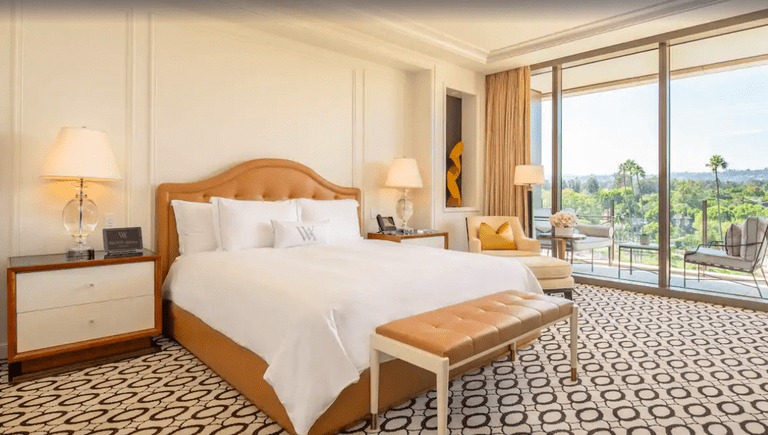 The Waldorf Astoria Beverly Hills is a favorite among celebs and travel publications. Each of the 170 rooms has floor-to-ceiling windows and private balconies – or garden terraces for those in Villa Suites. The 3,215sqft (299sqm) Presidential Penthouse is equipped with its own fully stocked kitchen, home entertainment system, and gym. In typical Beverly Hills style, the hotel contains an expansive rooftop pool, a 5,000sqft (465sqm) spa, and multiple on-site restaurants headed by renowned chef Jean-Georges Vongerichten. A private Rolls-Royce provides a complimentary drop-off service within a 2mi (3km) radius – and just when you thought it couldn’t get any more Hollywood, there’s also rooftop yoga on Sundays. 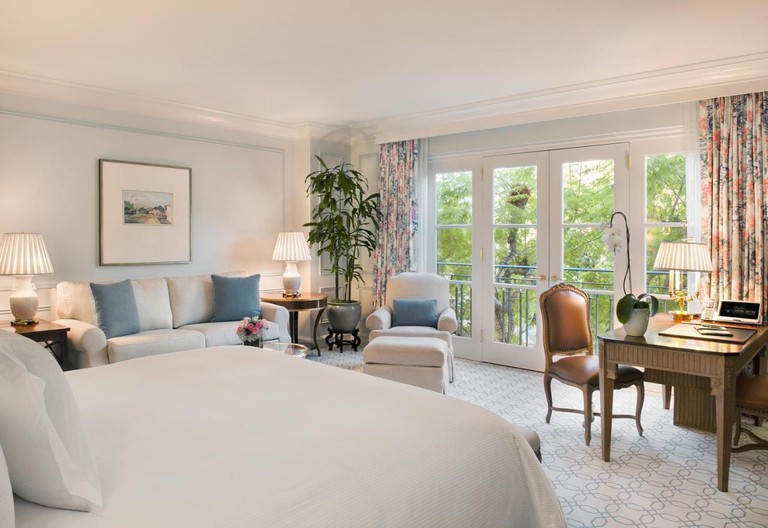 Courtesy of the Peninsula Beverly Hills / Hotels.com
The Peninsula has been rated as a AAA Five-Diamond and Forbes Five-Star Hotel every year since 1993. Instead of the typical Spanish Colonial Revival-style architecture, the Peninsula has a French country aesthetic that encompasses its 195 guest rooms, which include 38 suites and 17 private villas. Courtesy cars will drive guests anywhere within Beverly Hills and Century City. The Peninsula is also pet-friendly, and canine guests receive personalized towels, beds, and treats. The poolside cabanas, meanwhile, come equipped with flat-screen TVs and ceiling fans. The Peninsula is also known for its afternoon tea, held in the Living Room, which features either a harpist or live piano music. 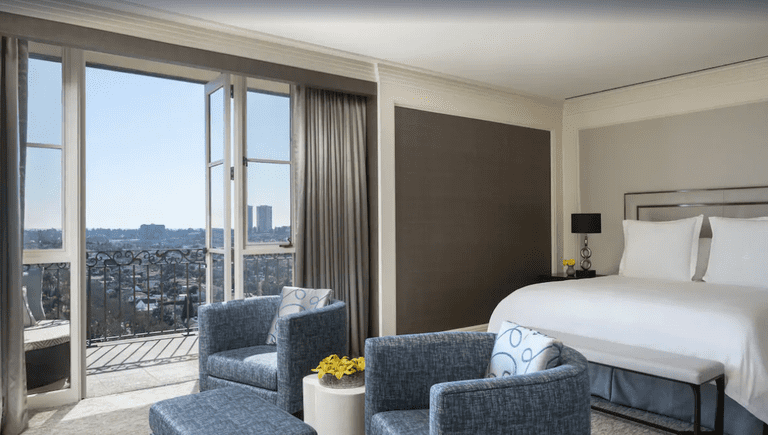 Open since 1928, the Beverly Wilshire is a Four Seasons Hotel that has also seen its fair share of celebrities and dignitaries, including Elvis Presley, the Dalai Lama, and the British royal family. It has also been used as a spot for filming, perhaps most notably as the setting for Pretty Woman – its Pretty Woman Package features a private behind-the-scenes tour of shops on Rodeo Drive. The hotel contains 395 rooms, including 137 suites. Of course, there’s also an outdoor pool, spa, and a restaurant headed by Wolfgang Puck.

Still haven’t found your perfect LA stay? Check into one of the top luxury hotels, or opt for a boutique hotel – bookable now on Culture Trip. There are so many reasons to visit LA, and make sure you don’t miss LA’s must-visit attractions. After a busy day of sightseeing, book a table at one of the best restaurants in the city.

This article is an updated version of a story created by Katie Watkins.