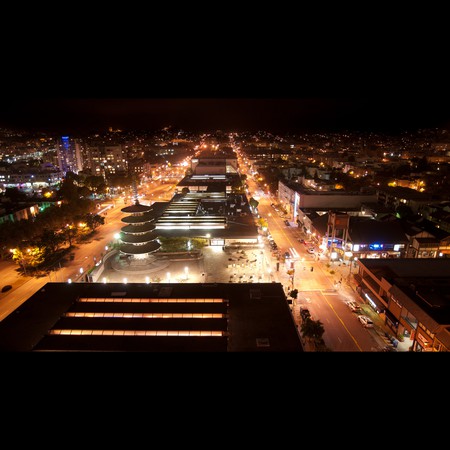 At the blurred edges of San Francisco’s Western Addition, Fillmore, and Japantown districts sits the Nihonmachi Peace Plaza. The plaza famously features a towering Peace Pagoda that watches over visitors as they rest after shopping or dining at the Japan Center.

Prior to 1900, most Japanese immigrants came to the US via San Francisco, many settling in the SoMa and Chinatown neighborhoods. After the 1906 earthquake, as the city rebuilt, Japantown was formed. What is known as Japantown today is approximately the space bordered by California and O’Farrell Streets to the north and south, and Fillmore and Laguna to the west and east.

The neighborhood grew until World War II. After the Japanese attack on Pearl Harbor, Japanese Americans were forced into internment camps, whether or not they were US citizens, even including some second and third generation Japanese Americans. Even after the internment ended, many Japanese Americans chose not to return to their San Francisco homes. Japantown’s population depleted as many moved instead to the east and midwest, or to Los Angeles’s Little Tokyo, the most populous Japanese settlement in California today. 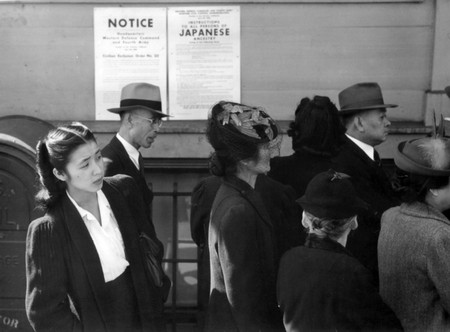 Japanese American internment detainees | © US Department of the Interior/Wikipedia

Today, San Francisco’s Japantown is marked by its iconic Peace Plaza. The plaza is an outdoor court resting between the Miyako and Kintetsu Malls that was created during the 1960s to complement the Japan Center Mall. It’s a serene spot to rest your feet after shopping or dining at the mall, and is also host to Japantown celebrations like the Obon Festival, Aki Matsuri, Children’s Day, and the Cherry Blossom Festival. According to California Japantowns, originally, the plaza’s design featured a 17th Century eternal flame, a granite reflecting pool, and a large drum-tower. Today, it features benches to relax on and plants to enjoy, as well as its famous Peace Pagoda. 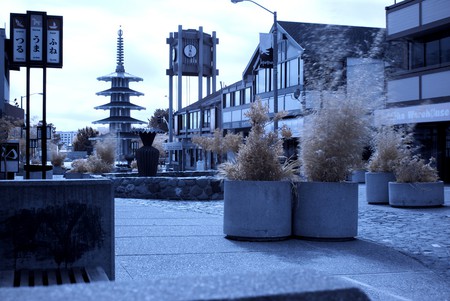 The SF Peace Pagoda was built in the 1960s and dedicated on March 28th, 1968. It sits in the northeastern corner of the Peace Plaza, between the Japan Center Mall and the Nihonmachi Mall. A Peace Pagoda is a Buddhist structure intended to inspire peace among all types of people. Many were built after the attacks on Hiroshima and Nagasaki during World War II, and by 2000 there were 80 Peace Pagodas around the world. The San Francisco Peace Pagoda is one of only a few Peace Pagodas built since World War II that was not supervised by Nichidatsu Fujii, founder of the Nipponzan-Myōhōji Buddhist Order. It was designed by Yoshiro Taniguchi, the Japanese modernist architect who also designed Tokyo’s National Museum of Modern Art, Imperial Theater and Okura Hotel. The Peace Pagoda was presented to San Francisco by the people of Osaka, Japan, San Francisco’s sister city since 1957. 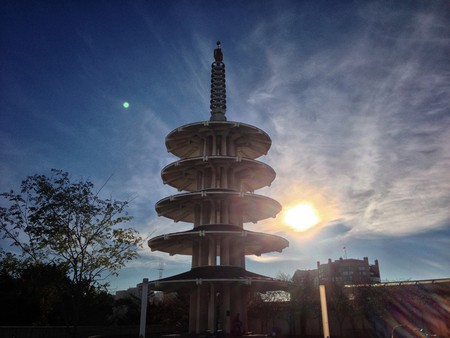 You can access the Peace Plaza as a pedestrian via Webster Bridge, a bridge crossing over the busy Geary Boulevard, providing a safe pedestrian walkway complete with spectacular views of the whole Japantown district and Western Addition. According to the SF Parks Alliance, the bridge’s design reflected that of traditional Japanese pedestrian walkways.

Stop by the plaza while shopping or on your way to catch a movie at the popular Kabuki Theater. Other nearby sights to enjoy include a twin origami-style fountain and a Japanese garden at the Miyako Hotel. Make a day of it by exploring more of what Japantown has to offer, like restaurants, great brunches, picturesque views, and more. 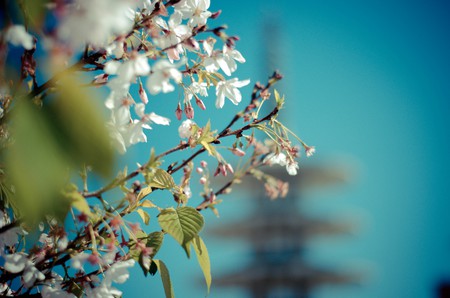 Springtime in Japantown | © Nicole Abalde/Flickr
Give us feedback