The Seven Weirdest Festivals in Alaska 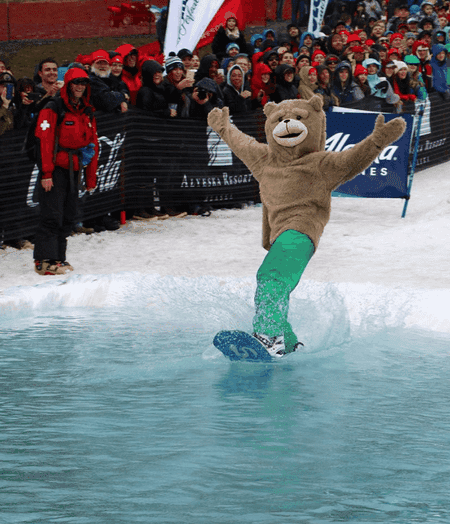 Alaska has no shortage of quirky festivals. Some honor ice worms, others demand incredible athletic prowess (or just reckless abandon), and more still are just a reason to boogie in bohemian dresses and cut-off shorts while basking in the midnight sun. Here are seven of Alaska’s most interesting and entertaining festivals to add to your bucket list.

One weekend each June, the tiny, remote town of Chicken, Alaska swells from its usual population of just seven people, to hundreds for Chickenstock. Billed as the “Top of the World Music Festival,” Chickenstock predominantly features local bluegrass and folk artists. Chicken attire is encouraged, as is doing the chicken dance. Some years a plane is hired to fly by and drop marshmallow Peeps to the crowd.

Almost time for the Chicken Dance!!

A post shared by Chickenstock Music Festival (@chickenstockmusicfest) on Jun 9, 2017 at 9:05pm PDT

“No dogs, no politics, no religious orders.” You’ll see those rules posted around the Forest Fair in Girdwood, Alaska. The free, family-friendly event features local handicrafts, entertainers, stilt-walkers, food trucks and carts, and a wide range of activities.

Held in Valdez each August, this festival celebrates Alaska’s gold mining history. There are oodles of events around the town, ranging from a parade and a petting zoo to an open-air market and competitions for kids. Though one of the biggest reasons to go just might be the quality people-watching – locals dress up in period costumes and elaborate hats for the festivities.

Salmonfest is best known for being a three-day festival with some of the biggest musical acts in the state, but it’s also a huge fundraiser for the Kachemak Bay Conservation Society. The weekend, usually the first in August, sees swarms of people from across Alaska and the Lower 48 visiting Ninilchik for music, food, art, and salmon conservation.

Calling all guitar lovers! Scott Pemberton booked for Salmonfest. The mastery of Scott's guitar playing combined with the fun recklessness of his songwriting show that the rules of songwriting and playing the guitar don't exist for him. Scott plays with the uninhibited joy and intensity of someone who recognizes that every time we make music, it's an honor and a gift. Best descriptions of Pemberton. "A wildly creative virtuoso." Jambase "A modern day Jimi Hendrix." Chico Enterprise. Check him out! Get your discounted, early bird tickets now at salmonfestalaska.org #music #scottpemberton #guitar #rock #salmon #salmonfest #comingsoon #comesooner #salmonfestak #summer #2018 #camping #musicfestival #like #love #fun #summertickets #tickets #onsale #sale #buynow

Created in 1961 by a couple Cordovans looking to break up the long winter with some kind of celebration the Ice Worm Festival was born. Now the festival features a beard contest, lectures, a paper airplane competition, a Miss Ice Worm pageant, and more, all in the name of celebrating the resilient ice worm.

If extreme sports are your thing, Arctic Man is where you want to be in April, featuring teams of skiers and snowmobile riders (called snowmachiners in Alaska). The skier charges down a 1,700-foot slope to grab a rope tied to their snowmachining partner, who pulls them up another slope, which they ski down to the finish. Beyond breakneck speeds, the event also hosts a beer tent, live music, and the kind of debauchery you can only find in the Alaskan wilderness.

This three-day event celebrates the end of the ski season using the slushy conditions of the lower mountain. The biggest draw of the festival is the Slush Cup competition that sees elaborately costumed skiers and snowboarders blasting down the mountain and off a ramp in attempt to skip across a waist-deep pool of slush. Of the 50 competitors, usually only a few make it across, but the wipeouts are equally, if not more, entertaining. The weekend also has an “Idiot Swim Across,” a tug-of-war, and more.

Celebrating the 41st Annual Spring Carnival & Slush Cup. If you are not at Alyeska this weekend… well, you should be. 🎡❄️🎡 #slushcup2018 #alaska #snowsports #springskiing