Where You Can Find The Best Folk Art in Oaxaca

A gorgeous alebrije from Arrazola | © Eduardo Robles Pacheco/Flickr
Oaxaca is the most diverse state in Mexico, with the richest history of indigenous peoples and, as a result, some of the most intriguing and vibrant folk art in the country. To this day, there are 16 separate indigenous groups spread across numerous villages, each of which is known for their own unique artworks, from rugs to pottery and everything in between. Here’s where you can find the best folk art in Oaxaca.

Easily the most recognizable name when it comes to iconic Oaxacan folk art, Teotitlán del Valle (along with the neighboring town of Santa Ana del Valle) is best known for handwoven and natural dyed wool tapetes, a.k.a. rugs. Made laboriously by skilled craftspeople using pedal-operated looms, these rugs are often pricey but well worth the investment, not least for their artistic value but also for the economic support they provide to the families in these Oaxacan villages. Head off the main streets to support workshops that often get overlooked by tourists.

For woven goods that go beyond rugs, you need to make your way to the lesser-known town of Santo Tomás Jalieza. Sure, they still have plenty of good old tapetes available, but in this tiny pueblo you’ll also find a ton of other beautiful pieces, like sashes, belts and table runners, made using backstrap rather than pedal-operated looms. So, if you want a more uniquely crafted piece of folk art, this is the place to go. 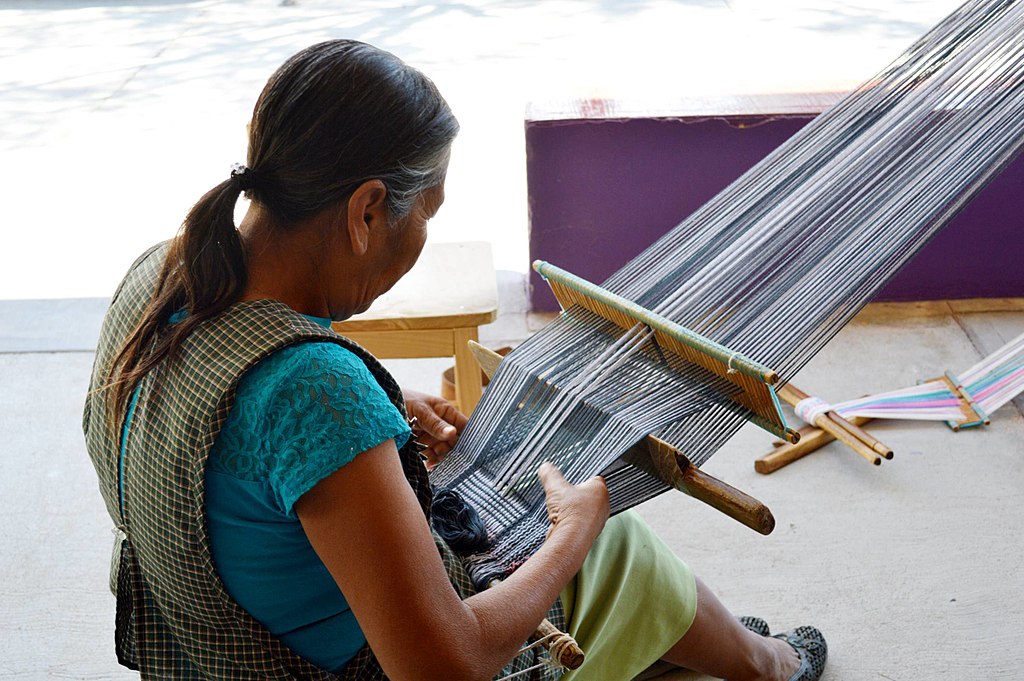 Pottery is a major staple of the Oaxacan folk art industry, with several towns in the state producing their own variations of these already one-of-a-kind pieces. Santa María Atzompa – situated at the base of Monte Albán – is just one of those towns, known principally for striking, natural green glazed pottery, decorated with pastillaje (raised clay additions that give it an elaborate appearance). 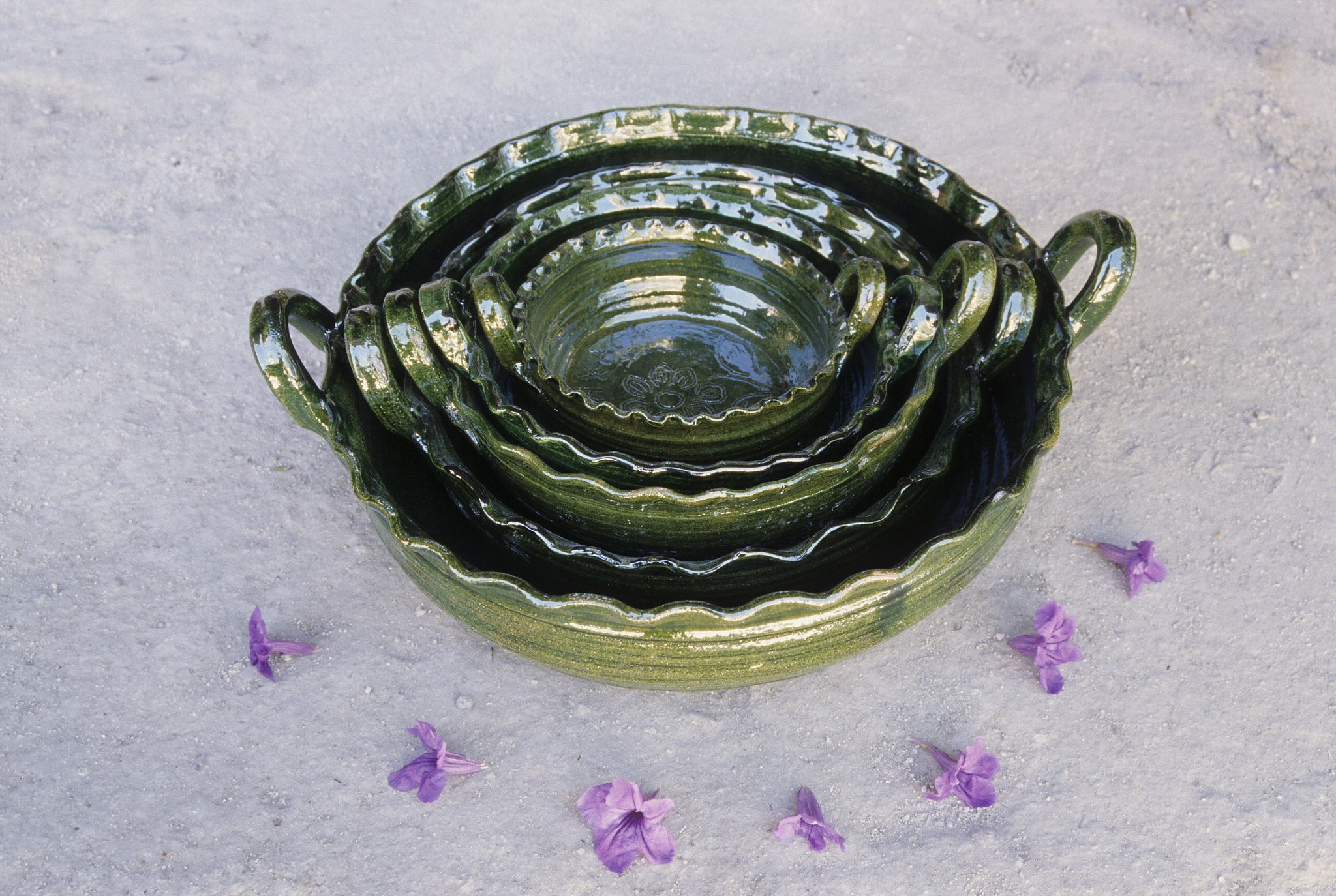 Market
Ocotlán is one village that crafts both green and black pottery | © katiebordner/Flickr
Another Oaxacan town famed for clay, as well as having a vibrant and popular craft market, is Ocotlán, which shouldn’t be confused with the Jalisco town of Ocatlán. Here, you can also find green glazed pottery, along with tan glazed wares and the famed barro negro of the region. This latter style is arguably better associated with San Bartolo Coyotepec, but can also be picked up in Ocotlán if you’re short on time. Look out for clay figurines in this village too.
More Info
Open In Google Maps
Ocotlán, Mexico

As mentioned above, San Bartolo Coyotepec is easily the town in Oaxaca best known for barro negro, otherwise known as black pottery. This unusual type of folk art involves handcrafting the item before (sometimes) adding intricate lattice detailing and firing it in a pit kiln. Once finished, it’s polished to an intense shine which lends it its high-quality feel and finish. You can find figurines, pots and even just simple decorations made from barro negro in San Bartolo Coyotepec. 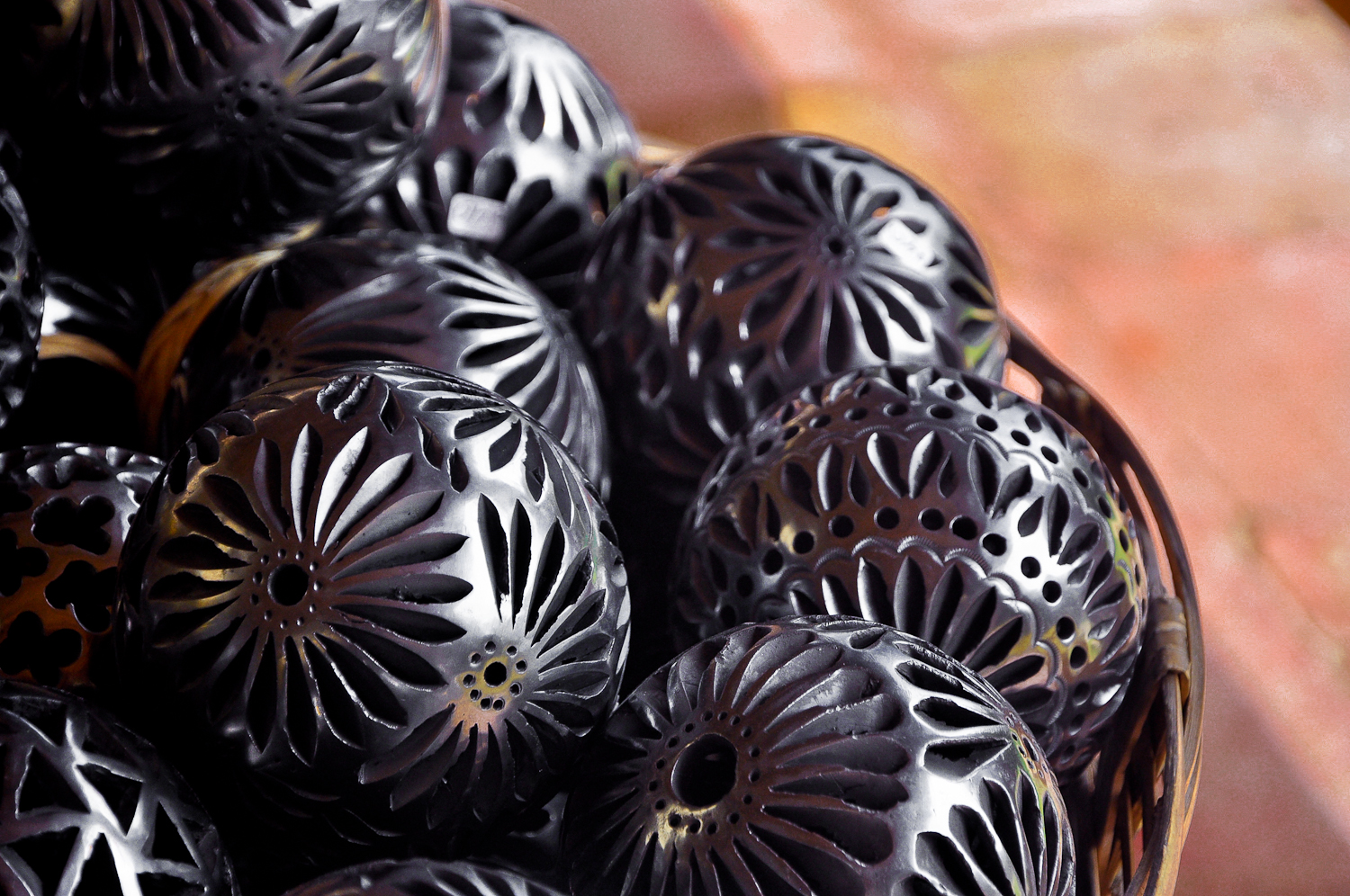 Market
Female potters and their barro negro creations | Female potters and their barro negro creations
The final clay town we recommend stopping by when hunting for folk art in Oaxaca is Zaachila, another small region with a fantastic weekly market held each Thursday just south of Oaxaca City. Here you can pick up several beautifully crafted pieces of barro negrofor which the zone is known, alongside all kinds of other foodstuffs and handicraft products sold by vendors from their overflowing tables or simple rugs on the floor.
More Info
Open In Google Maps
Zaachila, Mexico

Alongside clay and tapetes, the most recognisable handicrafts produced in Oaxaca are undeniably the vibrant, delicate and surprisingly lightweight alebrijes. These petite wood carvings – often shaped like mythical creatures or vaguely surreal animals – are representations of spirits according to the Zapotec culture and can be found in abundance in the town of San Martín Tilcajete. Wood in general is the staple here though, so look out for hot chocolate whisks among a wealth of other wood based items. 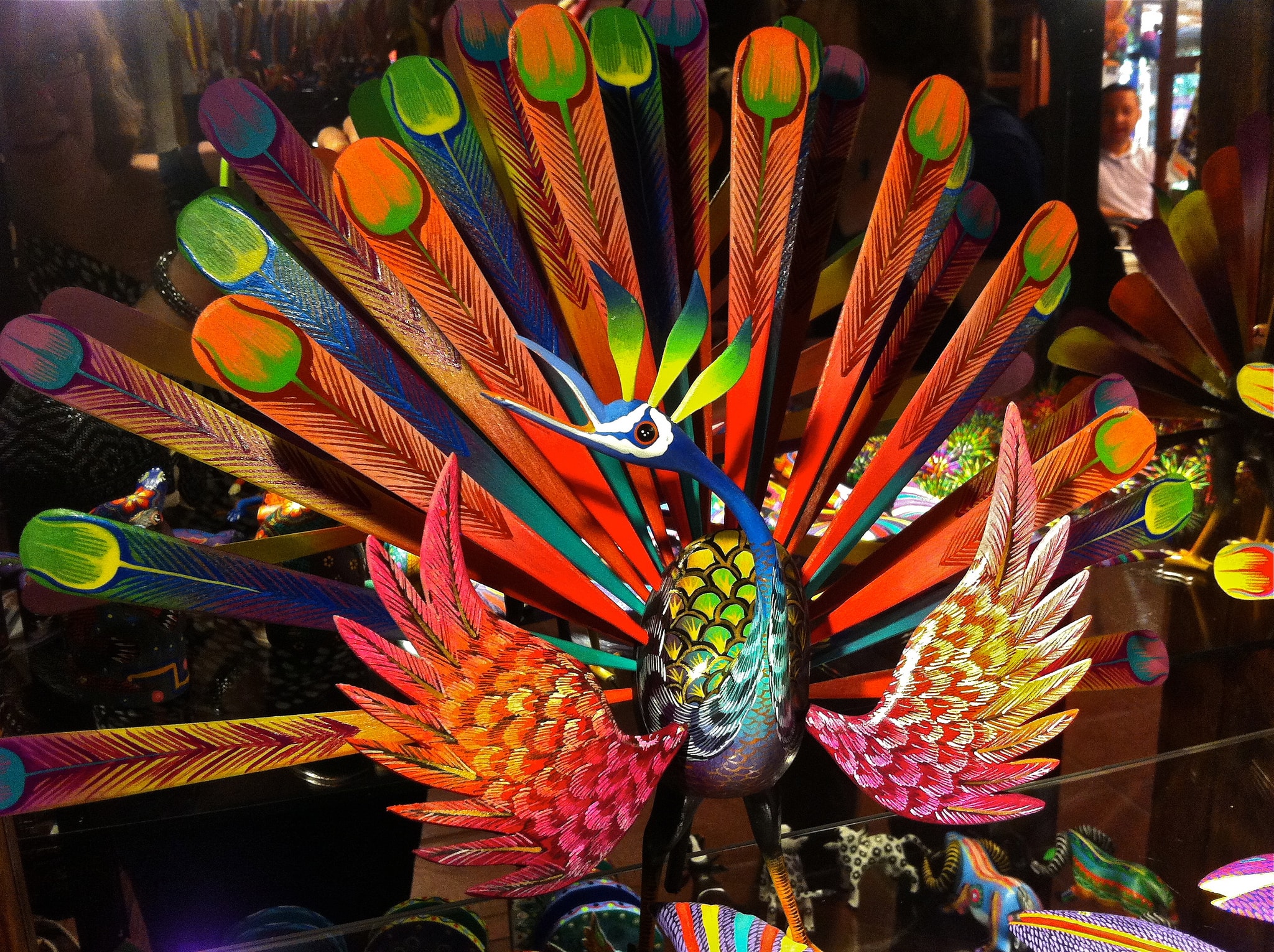 The second of Oaxaca’s three woodworking towns, the first being the aforementioned San Martín Tilcajete and the third being La Unión Tejalpam, Arrazola is also known for the lightweight porous alebrijes that make for colorful, cute and cultural souvenirs. Choose from the large ones that might be a pain to transport but would make a statement in any household, or from the petite ones that will happily slip into a rucksack, but remember to pay fairly for these tiny artesanías. 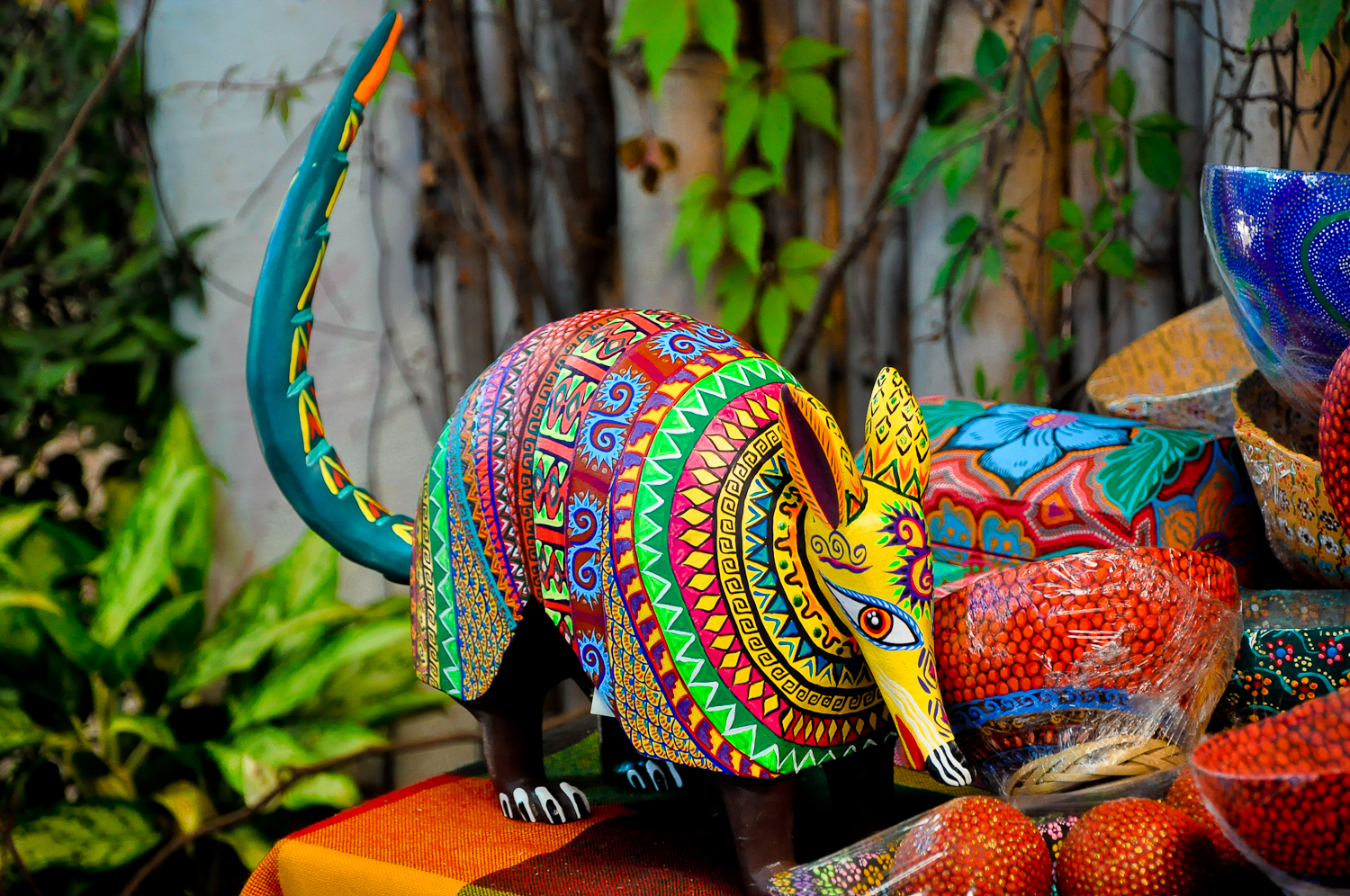 If you’re looking for beautifully embroidered pieces of clothing and household decoration, the place to head in Oaxaca is the lesser-known town of San Antonino. Here they specialize in detailed stitching techniques, usually featuring animals and flowers and typically applied to women’s dresses. These so-called Oaxacan wedding dresses command a high price and, presumably, plenty of envy too. You can also pick up dried flower arrangements made with flores inmortales or woven baskets. 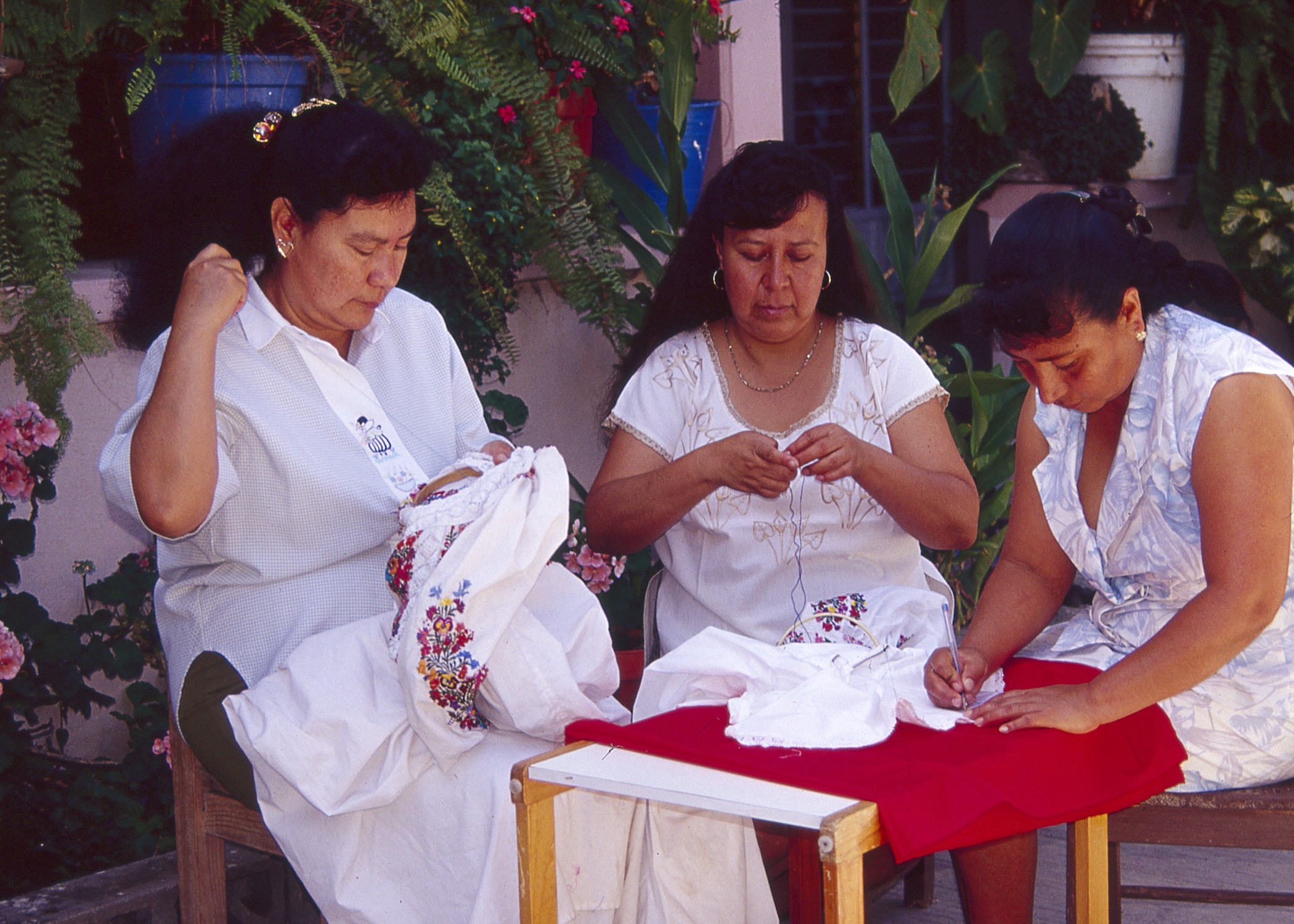 Market
Villa de Etla is famed for baskets like the ones in this photo | © CTOZurich/Flickr
Finally, while the market town of Villa de Etla is principally known for being the birthplace of Oaxaca’s famed and deliciously stringy quesillo cheese, it’s also got an artisanal crafting background and produces many woven palm products, such as hats, baskets and bags. Often, these products are vividly decorated with colorful geometric patterns that make them well worth spending a few pesos on.
More Info
Open In Google Maps
Villa de Etla, Mexico