These Female Mexican Musicians Should Be On Your Radar 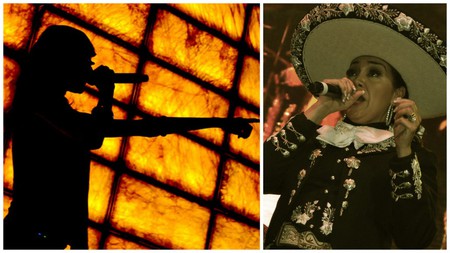 Mexico’s music scene is thriving at the minute, but homegrown talents are so often overlooked for the more international appeal of U.S. and European stars. Even so, there are still many established Mexican artists, singers and composers on the scene that should be on your next playlist, as well as your radar for keeping a close eye on. Here are the female Mexican musicians to listen out for; from jazz singers to feminist rappers and concert pianists, Mexico’s women are ready to take the global spotlight.

Considered a musical prodigy by many in the know, Daniela Liebman is a mere 15 years old but is already considered one of Mexico’s best concert pianists. Her love of music was encouraged from an early age by her parents, and although the violin was the first instrument she dabbled in, she never took to it like she did with the piano. This makes sense when you consider that her grandmother was also once a famed concert pianist in New York — it seems talent runs in the family!

Nowadays, you might know her better as the lead singer of Hello Seahorse!, but you probably didn’t realize that Denise Gutiérrez is actually a classically trained opera singer. As with Daniela Liebman, Denise Gutiérrez figured out her love for music early on, training with opera singer Teresa Magaña before adopting the pseudonym ‘Lo Blondo’ and forming her first band, Bestia, in 2008. While her operatic stylings are clear on Hello Seahorse! songs such as No es que no te quiera, her range, both vocally and musically, is impressive.

As one of the biggest names in Mexican music right now despite debuting her musical talents for the first time in 2003, Natalia Lafourcade more than deserves your attention. Famous across Latin America, her music toes the line between upbeat pop and rock but always manages to perfectly capture her unique voice that is delicate yet powerful at the same time. In 2005, she formed Natalia y La Forquetina, releasing one album before going solo. Now onto her fourth solo album, Hasta La Raíz, if you only listen to one woman on this list, let it be her.

Oaxacan feminist rapper Mare Advertencia Lírika got into rapping through her involvement with graffiti, and eventually became part of the OCG crew. However, this branch evolved and diversified, leading to the creation of Advertencia Lírika although since 2012 Mare has been predominantly working on her solo career as both a singer and rap artist. Most of her tracks show reggae influence, with lyrics that bring in features of Mexican folklore and a denouncement of both the patriarchy and violence against minority groups.

One of, if not the leading name in Mexican jazz music, Magos Herrera is a woman dominating in her field. With over 15 years of experience in the industry, she has eight solo records and numerous collaborations to her name with other popular jazz musicians, including Iraida Noriega (who’ll be featured further on in our guide). Outside of her native Mexico, she’s also wildly popular in New York, the place she’s called home since 2007 and is well known for her promotion of Mexican music in international markets.

Joy Huerta, better known simply as Joy for her role in the Mexican brother-sister pop duo Jesse & Joy, has been one of Latin pop’s biggest and best-known names since her debut in 2005. Born Tirzah Joy Huerta Uecke, she both sings and plays guitar and there’s a chance you recognize the music of Jesse & Joy from the Twilight Saga film series, given that they were part of the Mexican soundtrack. As if that weren’t enough, she’s also duetted with the likes of Leonel García and Juan Gabriel.

Our second jazz entry, Iraida Noriega is famed for her experimental approach to the genre, as well for being one of the country’s leading jazz singers and composers. Known internationally in countries such as Spain and the U.S. due to the multiple tours she’s undertaken over the years, she’s also graced the stage with several other famed exponents of Mexican jazz like Roberto Aymes. With more than ten records under her belt to date, she’s one of Mexico’s most consistent, excellent jazz talents that you really ought to be listening to.

Julieta Venegas is one of the biggest names in the Latin American music industry, with multiple Grammy wins under her belt, as well as multiple successful albums and tours. Her most recent record, Algo Sucede just won her the Latin Grammy for Best Rock/Pop Album at the 2016 awards. Her often far too underrated yet consistently successful career has sadly not reached the playlists of many people outside of Latin America though, a crying shame considering that many of her songs are instant classics.

Carla Rivarola, better known as Iranti, is described as a one-woman band with an electric guitar. A talented singer, songwriter and guitar player from Mexico City, she’s known for providing a quirky and pared-back take on the typically over-the-top electric guitar. Her music spans multiple genres; jazz focuses heavily, as does folk rock and even Brazilian musical genres, although they all get filtered through her talent and come out as beautifully put together indie pop.

Perhaps you’re familiar with the music of Aida Cuevas, given that she’s one of Mexico’s major proponents of ranchera and mariachi music? One of the few super successful female mariachi singers, her career has spanned over 40 years and garnered her many awards in the process. The combination of her powerful, falsetto voice and her incomparable style have led to her nickname ‘The Queen of Ranchera’, and propelled her to the position of crème de la crème in her field, so you really should know about her.

Jezzy P, a native of Ecatepec, Mexico State, is a feminist rapper that broke boundaries when she started her career way back in the 90s. One of the few women who dared to speak up about the situation in her hometown regarding the high level of femicides that were taking place there, she has since become one of the country’s most important and respected female emcees. Now a part of both the Rimas Femininas and Mujeres Trabajando collective, she’s realized five records that discuss gender discrimination amongst other topics.