These Are the Mexican Soups You Need to Try 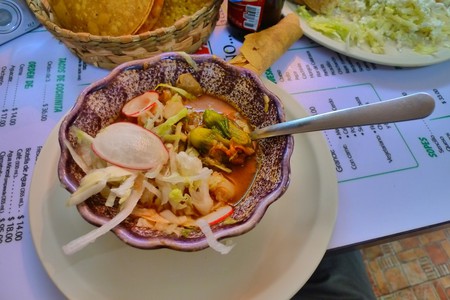 Think about food in Mexico and tacos, tortas and tamales are likely to spring to mind. But what about soups? Soups, broths and stews may not be the most glamorous of dishes, but Mexico has plenty of delicious regional varieties that you ought to be checking out. Here are the top 10 Mexican soups to try.

Let’s kick off with the Marmite of Mexican soups: menudo. Sometimes known as pancita (‘little belly’), you guessed it, menudo is made with tripe doused in a rich, flavoursome broth. Most menudo-eaters will pileon the onion, coriander and lime juice before tucking in, and while some hail it as the king of hangover cures (it’s sold by the gallon on Sunday mornings for some reason), others save it for special events such as weddings. There are also those who just can’t stomach the stuff. 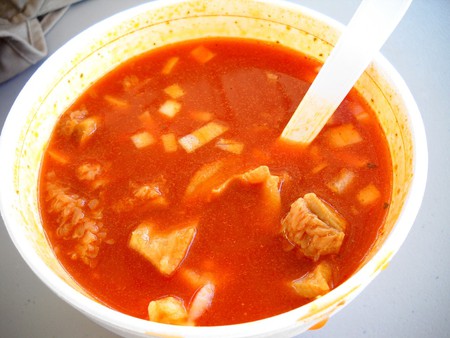 A staple regional dish of Jalisco state, birria is really more of a stew than a soup, but it’s so delicious we couldn’t not include it. Much like menudo, it’s a favourite for special occasions, like weddings and birthdays, and is also regularly enjoyed on Sunday mornings. It’s made with tender goat’s meat (or mutton, or beef) that falls off your fork as you try to gobble it up, combined with a spicy adobo sauce, and should be served with warm corn tortillas, onion and lime. Alternatively, eat in the form of a taco dorado (a hard taco, Mexican-style, not Taco Bell-style). 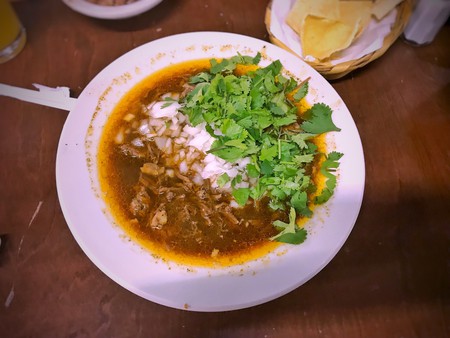 Birria is more of a stew than a soup | © T.Tseng / Flickr

Mexico City’s sopa de tortilla, otherwise known as sopa Azteca or even sopa tarasca, does what it says on the tin, combining crispy corn tortilla strips with a richly flavoured, spicy tomato base. Chunks of avocado, cubes of fresh cheese and dollops of crema are traditionally piled on top, although some people also like to throw in chicharron (pork rind) and pasilla chillies. Whatever extras you decide to include, this soup will likely become a firm favourite. 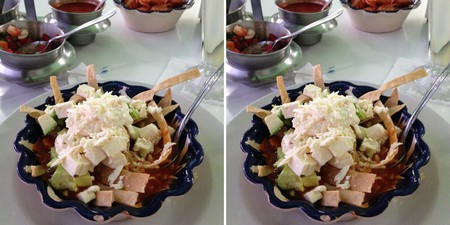 Some say that sopa de lima, which hails from the Yucatán Peninsula and is a combination of Mayan and Spanish cooking techniques and ingredients, is similar to sopa de tortilla. However, beyond the use of tortilla strips, we fail to see the resemblance. After all, sopa de lima (‘lime soup’) relies heavily on the almost acidic flavour that lime brings to this fresh yet punchy dish, which also typically includes chicken, pepper, tomato and coriander. 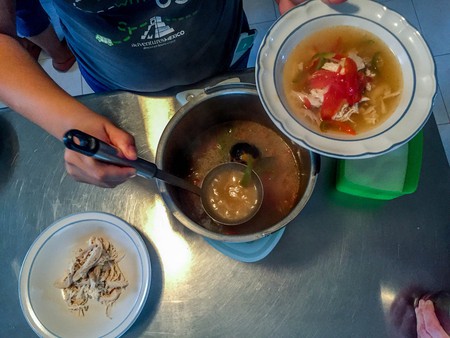 If you speak Spanish, you might be confused at the name of this next soup, sopa de piedra. If you don’t speak Spanish, it’s worth noting that this translates as ‘stone soup’. An entirely indigenous dish, from the town of San Felipe Usila in Oaxaca, sopa de piedra is a simple and intriguing soup which, surprisingly, does involve the use of a stone. Once the ingredients (mainly consisting of vegetables and seafood) are prepared, pre-heated stones are plucked from the flames and added to the pot, essentially cooking the broth from the inside out.

Noodle soup, aka sopa de fideos, isn’t exactly Mexico-specific (in fact, it’s also a staple in regional Filipino, Spanish and Tex-Mex cuisine); however, it is a commonly consumed, simple broth, often served as the starter course for fonda meals (a fonda being a restaurant in a family home) and comida corrida (affordably priced set meals). The noodles (vermicelli and angel hair pasta can also be used) tend to be broken up and browned before being added to the stock base. For a more whimsical twist on sopita de fideos, some people use pasta letters, creating sopa de letras. 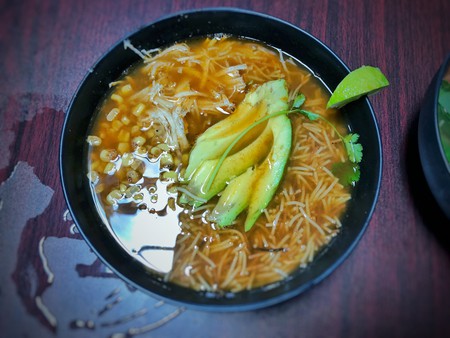 A version of the classic sopa de fideos | © T.Tseng / Flickr

The Mexican ‘seven seas soup’ uses seafood as its main ingredient, funnily enough, and is also known in Spanish as caldo de siete mares and caldo de mariscos (the less wordy ‘seafood soup’). Generally popular in coastal areas of Mexico, like the Baja Peninsula and Puerto Vallarta, it’s watery in appearance but rich in flavour, and will typically pull together any in-season seafoods with a chicken, tomato or fish base.

Arguably the best known of all the Mexican soups, pozole (from the Nahuatl pozolli) is a traditional and time-consuming dish that is typically saved for special occasions, including Mexican Independence Day. Although there are various regional variations on pozole, including green, white and red versions, your standard pozole (an absolute must-try when in Mexico) contains hominy (corn) and pork (usually), to which most will add fresh onion, coriander, cabbage, sliced radish and a dash of lime juice. It’s eaten accompanied by crema-slathered tostadas.

Caldo Tlalpeño, originating from the Tlalpan area of Mexico City, really just seems like a fancy way of saying ‘chicken soup’. After all, it’s made from a base of chicken broth, chicken meat and assorted vegetables – chickpeas, carrots, beans and onion – seasoned with chilli and garlic, and sometimes served with avocado, cheese, rice and tortilla strips. Truly traditional versions skip the rice. 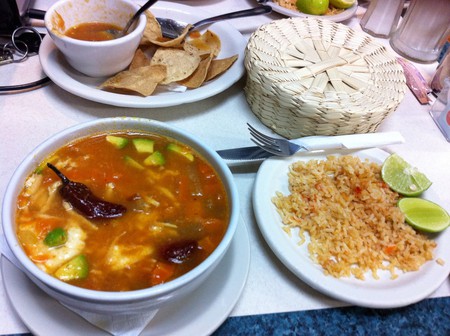 Caldo Xóchitl is very similar to caldo Tlalpeño, again based on a light chicken broth, with shredded chicken meat, onion and avocado. However, caldo Xóchitl ups the ante with the addition of tomatoes and peppers. Many people will also chuck in all sorts of other vegetables to this mix. Long story short, if you’re feeling sick, this is probably the Mexican soup you’ll crave.