The Secret Behind Oaxaca’s Stone Soup 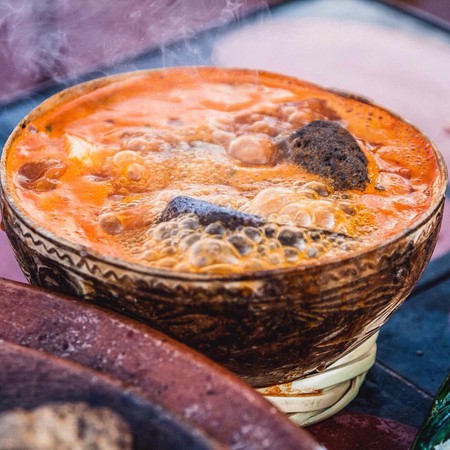 Traditional Mexican cuisine is so delicious that you can find it on UNESCO’s intangible cultural heritage list, and one of the best places to try it is the southern state of Oaxaca. Don’t leave this foodie paradise without tucking into caldo de piedra, or stone soup, a delicious fish broth that is brought to a boil with the help of a glowing-hot stone.

Caldo de piedra is now well known enough that foodies can find it in fancier joints such as Mexico City’s El Lago and Casa Crespo in Oaxaca. But the pre-Hispanic dish originates from San Felipe Usila, where the Chinantec people have prepared steaming broths in this way for centuries.

Approximately a seven-hour drive from the state capital of Oaxaca, the tiny town of San Felipe Usila was long cut off from the rest of the area by legions of rugged mountains. However, foodie outsiders are increasingly heading to the destination to try out its singular specialty, caldo de piedra.

The dish is prepared in a large gourd bowl filled with cold water, sliced green chiles, coriander, onions and half of a mojarra fish. To heat the dish, the cook takes a red-hot stone from the fire with some tongs and places it in the bowl. The contents hiss wildly, and the gourd immediately begins to boil, cooking the fish and the broth in under two minutes.

Caldo De Piedra" (Stone Soup) is a pre-Hispanic dish from the town of San Felipe Usila, Oaxaca, a purely indigenous delicacy. The customary Stone Soup has been long considered as a symbol of coexistence and unity among community members and now distinguished guests. Collectively, the families divided the tasks of fishing fresh shrimps and fish "mojarras" ,selecting the right stones from the river, gathering firewood and building the fire to heat the stones until they are glowing red and ready to be dropped into the raw soup for cooking. Other ingredients are: Fresh sliced tomatoes, fresh smashed tomato sauce, onion, lime,salt and epazote herbs. It tasted DELICIOUS!!!! Certainly food is culture!❤️️#exploreoaxaca #caldodepiedra #sanfelipeusila

In San Felipe Usila, the whole process is traditionally carried out by the side of the river, making for a truly hands-on recipe. First, locals select stones from the river and collect wood from the nearby forest to make the fire that will heat the rocks. After that, they catch fish from the river and scale them, before placing them in the gourds. Once the stones are ready, they gently put them into the broth, and people eat the steaming contents right then and there.

If a seven-hour drive to San Felipe Usila isn’t for you, you can try the seafood soup at El Comedor Prehispánico – Caldo de Piedra, which is 20 minutes from central Oaxaca. The Gachupín family who has become international ambassadors for the dish in recent years owns the restaurant. They have been invited to prepare the meal for audiences in New Orleans and have even starred in The Path of Stone Soup, a short documentary directed by Sarah Borealis and Arturo Juarez. Therefore, a visit to Oaxaca would not be complete without a visit to the Gachupíns’ restaurant.

In short, caldo de piedra is a must-try dish when in the state of Oaxaca, and in the age of microwaves and toaster ovens, you’d be hard-pressed to find a more exciting way to heat your dinner.