The Most Beautiful Plazas in Mexico City

The Mexico City Zócalo│© phoebecole17/Pixabay
Plazas in a monster city make for places of respite, places to catch your breath, places to admire the beauty around you and if you turn any corner of Mexico City, these architectural gems are just waiting to be discovered. We’ve gathered some of Mexico City’s most beautiful plazas and what they have to offer from both the past and the present.

The Zócalo is Mexico City’s main plaza and one of the largest in Latin America. While the plaza has gone through many stages—leafy green some years ago to crawling with vendors and now it’s the site for many cultural events—it’s never lost its allure as an incredibly beautiful plaza. It’s surrounded by some of Mexico City’s most important architectural monuments: the Aztec Templo Mayor, the Metropolitan Cathedral, the National Government Palace (where Diego Rivera’s murals are) and some of the first colonial architecture. Where can you get the best view of the Zócalo? Take a walk to the top of the Metropolitan Cathedral where you will find the church’s bell tour. 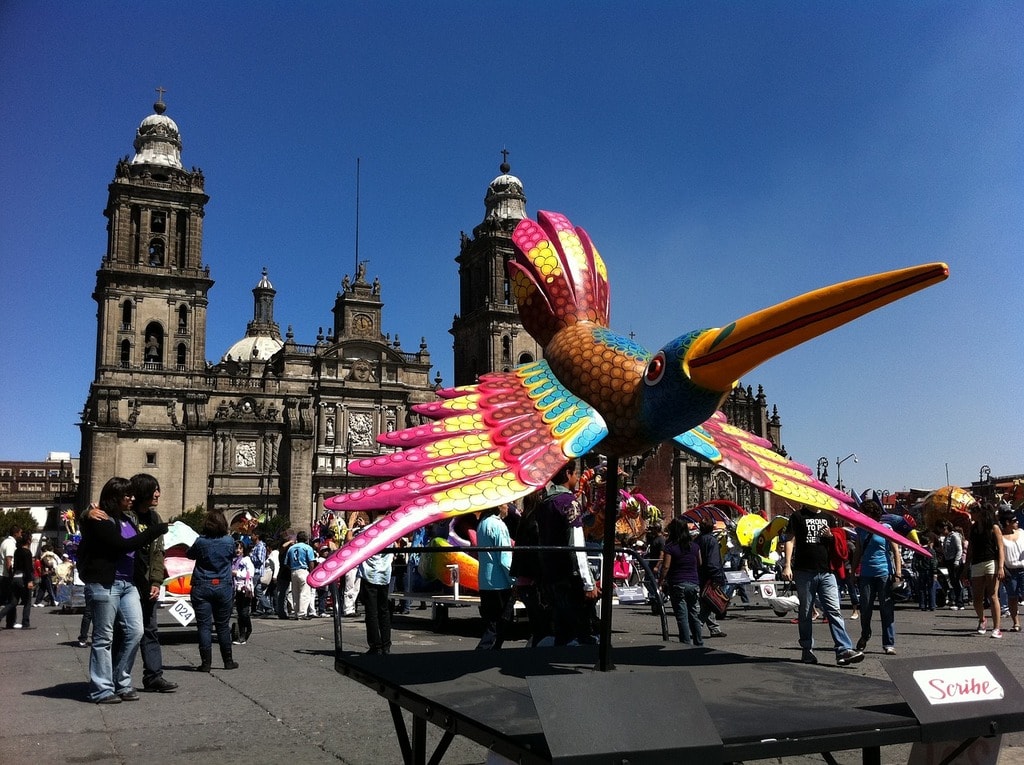 Plaza Santo Domingo is one of the city’s most well-known as it was once filled with letter writers, and their typewriters, who would charge a few pesos to any person needing to send a love letter. The plaza still has vestiges of that history with its many stamp and printing stands, as well as some illegal businesses that sell falsified documents. The stunning (and sinking) Santo Domingo church sits at one end of this delightful plaza and don’t be surprised if you stumble upon an opera singer or a group of indigenous dancers. The plaza hosts regularly-scheduled cultural events and if you want some historical insight, the Palace of the Inquisition nearby is fascinating to wander through. 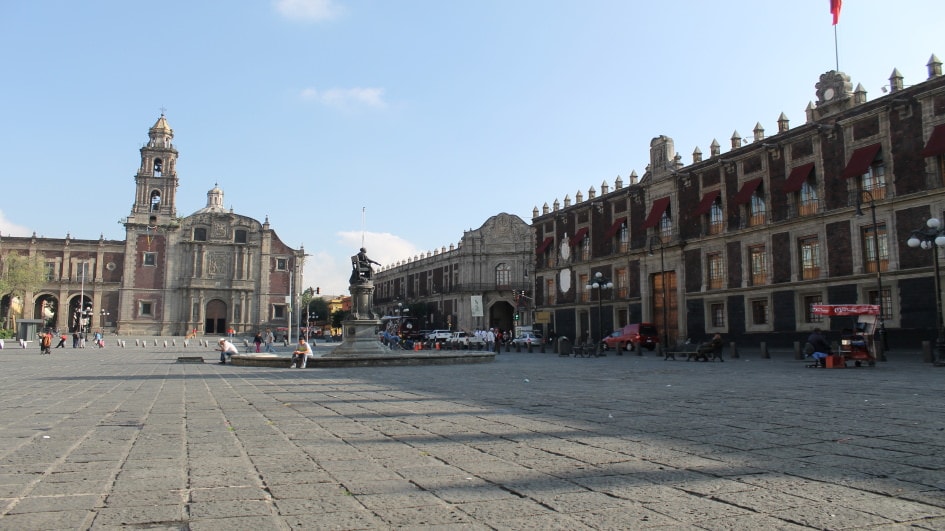 Right in front of Mexico’s National Museum of Art sits the Plaza Manuel Tolsá, which you might recognize from its famous cameo in the James Bond Spectre movie. Its most prominent feature is the equestrian statue of King Carlos IV of Spain created by famous Mexican artist Manuel Tolsá, after whom the plaza is named. Though it’s a site of many protests in Mexico City, this plaza is generally open for walking and viewing the beautiful surrounding colonial architecture. A few restaurants sit at its east end and are the perfect place to sip a glass of wine and watch the city’s daylight transform into night.

Building
Plaza Villa Madrid | Plaza Villa Madrid
Since Plaza Villa de Madrid was recently revamped, it is not a true Colonia Roma neighborhood gem. With a replica of the grand Cibeles fountain in Madrid, this roundabout once had one of the first neighborhood wells when it was built in the 19th century. Chairs and tables sit around the fountain’s gushing towers of water and you are bound to find tourists taking selfies in from of the giant CDMX sculpture. All around the plaza are great restaurants and places to sit, including Cancino Cibeles Pizza and the Cervecería del Barrio. Durango Street, which leads out from the plaza with a tree-shaded median, is lined with local eateries and shops and is a pleasant route for walking to the La Condesa neighborhood.
More Info
Open In Google Maps
Plaza Villa de Madrid, Roma Norte Ciudad de México, Ciudad de México, 6700, Mexico
View menu
Visit website
Visit Facebook page
Send an Email
Give us feedback

Named for the famous lawyer and writer Luis Cabrera, this plaza is one of the Colonia Roma neighborhood’s nicest. Encircling a large fountain, the plaza’s sidewalks are generally filled with couples strolling by hand in hand, families teaching their kids how to ride a bike, and dogs out for their daily walk. Surrounding the plaza are the beautifully perseved buildings of the University of London, as well as some excellent restaurants: Cabrera 7 serves regional Mexican cuisine, Porco Rosso Roma has American-style BBQ, and NonSolo is a fine Italian restaurant. The plaza is well-lit and busy at night when coffee drinkers from the nearby Starbucks take a wander through the park.

The Franz Mayer Museum is housed in an ex-convent and hospital and its central patio, though tiny, is a lovely city plaza that students, museum-goers, and tourists visit to have a sit in the sun. The Franz Mayer building once functioned as a hospital for four centuries under the Catholic order of San Juan de Dios. Part of the museum’s allure is its incredible setting as well as its captivating exhibits, which are held on a regular basis. The convent’s original library is still open to the public and houses rare editions of Spanish-language literature. 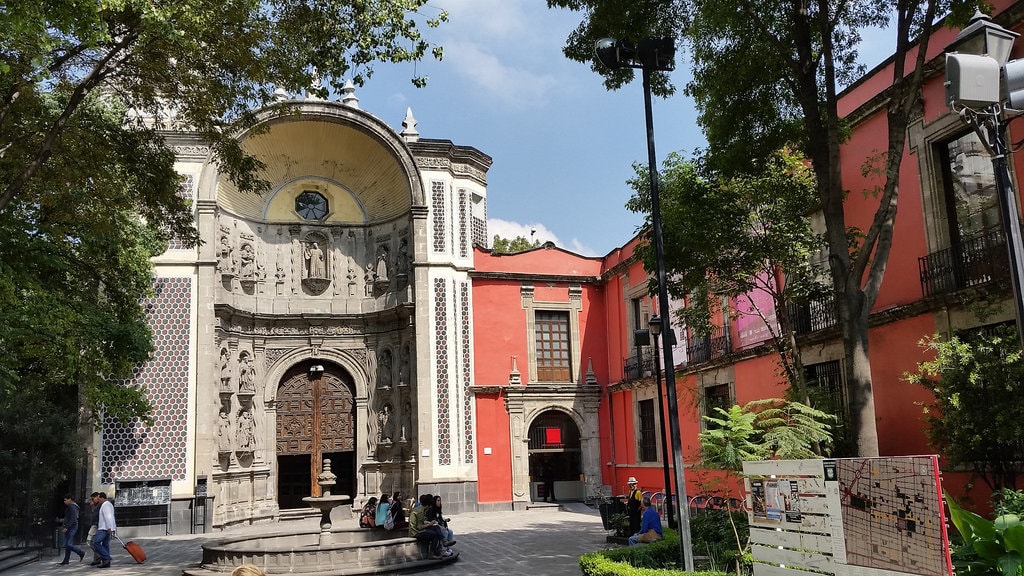 A small and unassuming plaza, the Plaza Loreto in the heart of Mexico City’s Centro Historico is a lovely place to rest and take a breath from the hustle and bustle of being downtown. The plaza’s church, Nuestra Señora de Loreto, is one of the few in Mexico City with a neoclassical-style facade even though its overall structure could be considered baroque. Plaza Loreto is across from another of the city’s most interesting churches—the hidden Justo Sierro Synagogue. The synagogue is open to the public and a great place to learn about a unique part of the city’s religious history.

Once the home of beggars, vendors, and vagabonds, the Alameda Park is now a lovely place for a Sunday afternoon stroll with the family and has several fountains and monuments lining its perimeter and dotting its interior. On its west end you will find the Diego Rivera Mural Museum and Alameda Art Laboratory, while on its east end is the exquisite Palacio de Bellas Artes. The Alameda is particularly lovely around March and April when the jacaranda trees are in full bloom and the square fills up with electric purple flowers. You can even get a bird’s-eye view from the rooftop bar at the Barrio Alameda building.

The Alameda from above │© Rafael Saldaña/Flickr

Plaza Rio de Janeiro features a beautiful replica of Michelangelo’s David built from bronze and given as a gift to the city in the 1970s. The plaza feels more protected from traffic than other places in the city and therefore offers a sense of unmatched intimacy and tranquility. Located right down the street from Panadería Rosetta, Plaza Rio de Janeiro is a great place to take a coffee and book, although it does have a tendency of getting crowded on the weekends and you might find a few Boy or Girl Scout troops practicing drills and playing games. During the week, it’s a prime spot for puppy playdates and ice cream vendors selling their refreshing treats.