Edward James was an eccentric Englishman who led a flamboyant and extraordinary lifestyle. The extravert and poet first moved to Xilitla, Mexico in the early 1950s and ended up transforming a declined coffee plantation into one of the largest and least known artistic monuments of the 20th century. 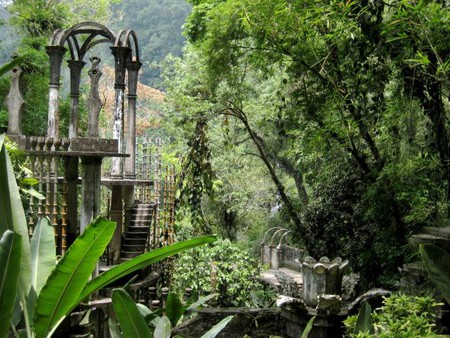 Born to immense wealth and privilege in 1907, James’ life imitated the Surrealist art he loved and collected. He turned his back on the rigid aristocratic circles of Edwardian England that he was born into, and befriended and supported dozens of artists who would become household names in later years. The people in his life included Dalí, Picasso and Stravinsky. He wrote poetry all his life, however it was in his building of Laz Pozas that he realised himself as an artist.

James threw himself with a passion, boarding obsession, into the natural world of Laz Pozas, ferociously planning and planting what he first envisioned as his earthly paradise. He started the project by planting thousands of orchids, bromeliads, exotic flora, cattleya orchids in tones of purple and Oncidium orchids from Hawaii (with its distinct vanilla fragrance of which the Aztecs first used as a flavouring for chocolate).

The land became a place of bizarre contrasts, isolated from the modern world. In this newly created realm, and the surrounding South America, James collaborated with the Surrealist circle and the artists that emigrated to Mexico away from the Fascism in Europe. He was particularly close to Leonora Carrington (he was the first to purchase her paintings, and was a great supporter of her work), Catalian painter Remedios Varo, French poet Benjamin Péret, Gunther Gerzso, and Luis Bunuel to name a few. James also discussed ideas with artists in California, such as the sculptor Oliver Andrews (then husband of Betty Harford), with the discussions later leading to the four-foot high sculpture of hands James made and installed at Laz Pozaz. 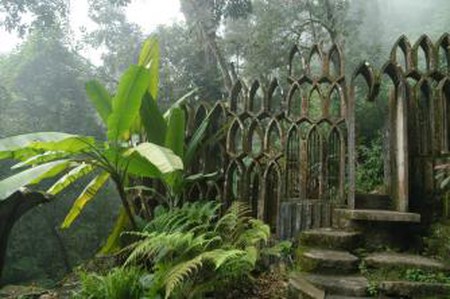 Laz Pozaz first started with only two simple huts being built, as it was the wildlife and plantation that James focused on. Leonora Carrington regularly stayed at the site and would thank James by painting murals on the small buildings of tall, ochre coloured beasts and curling tails, resembling Hungarian Surrealist Jose Hornas sculpture El Minotauro. Laz Pozas became to be a haven for animals, including endangered monkeys and dears hunted by the local villagers. A plan then grew to include bringing exotic creatures from afar to populate James’ semi-tropical paradise, embarking on excursions throughout Mexico and beyond to Central and South America. These creatures included snakes, macaws, flamingos and monkeys. Edward had often made clear that he found animals better company than humans. In a 1966 letter he wrote:

“Actually, I am quite happy alone…I am keeping away from old associations as much as possible, because nearly everything reminds me of something that has stung me some time or other. That is why I am happier at the ranch, where I am not reminded of the frustrations, failures and swindles”.

In 1962 a forest fire hit Laz Pozaza, destroying an estimated 18000 orchids overnight. This was a devastating blow to James, but is what finally drove him to build the bizarre structures seen there today. He decided to do something that couldn’t be killed by freak weather, building in concrete to recreate things that resembled trees, plants and flowers. He also installed elaborate and imaginative cages for the wild animals. Each building inspired more fantastic ideas; some appear to be influenced by the work of the Surrealist artists he saw frequently in Mexico City. 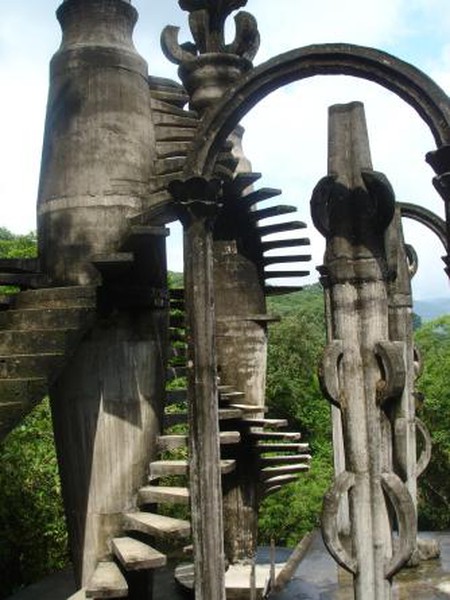 Edward James’ closest collaborators in the creation of Laz Pozaz were Plutarco Gastelum and Don Jose Aguilar. James also employed a huge force of local workers of Otomi and Huasteca origin, offering generous wages and effectively making his lavish project a goldmine for the local community. Jose Aguilar Hernandez was a master carpenter with a high reputation in the Huasteca region and was shown initial sketches from James’ sketchbook for his house, in which he had drawn the beginnings of a three-storey structure with curvilinear floors and sweeping staircases that descended to the jungle below. It had no walls, but colossal internal columns with capitals that rose to form slender arches, and in a semicircle around the structure there was to be a graceful swatch of slim columns three feet high resembling a sheaf of bamboo. The workers made these structures out of coloured concrete, with Aguilar making the wooden moulds. James would walk around Laz Pozas filling in countless sketchbooks with drawings that Aguilar and the master builders referred to in building.

Edward James talked of wanting to build a place of dreams and fantasies, a vast contrast to his former life in Britain which was full of anguish and betrayal. This obsession with building this world at Las Pozas was a natural extension of his life long trait of creating surreal environs and making the logical illogical. Within the extraordinary setting of Xilitla, James infused his imagination with the dark beauty and exuberance of the semi-tropical rain forest, creating an artwork that both imitates and interacts with nature.