Photography As Catharsis: An Interview With Chiapan Photographer Diego Moreno 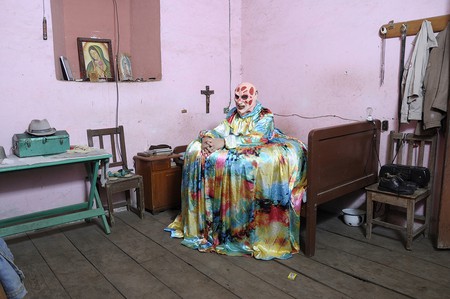 Will To Resist | © Diego Moreno

Diego Moreno is an up-and-coming photographer from the state of Chiapas in Mexico. While he currently has two photography series completed or nearing completion, he recently came to the world’s attention for his captivating and at times surreal ‘Guardians of Memory’ project. In this series, he wanted to redress the balance when it came to what we perceive as sinful, ugly and monstrous, finding his own personal catharsis along the way. We spoke to him to find out more about ‘Guardians of Memory’ and his plans for the future.

What inspired you to get into photography?

I’ve always had this fascination with family photo albums and the photo collages stuck on the walls of my aunts’ houses, as well as the fantastic tales and legends my grandmother would tell me, so I began photographing everything around me at age 16 with a pocket Kodak camera, never stopping to question the purpose. Regardless of technique or what it meant to be a ‘professional’, I felt that photographing brought many desires together – it was like a kind of magic that I never felt when painting or drawing. 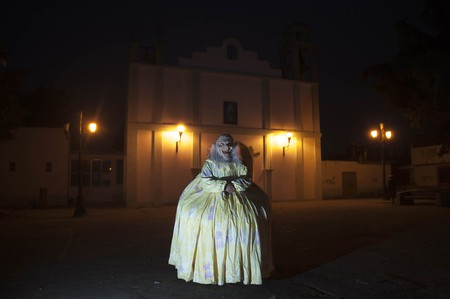 The Kingdom Of My Pillow | © Diego Moreno

Will To Resist | © Diego Moreno

How did you break in to the industry?

In 2012 I began to study photography independently (I decided against going to university as my city has no university offering photography courses), which was how I found out about the ‘Art Gym’. I took my first workshops there. From the beginning, photography for me has been a way of experiencing life and I had the best experiences getting to know people who lived for photography in the same way.

Afterwards, I was awarded a scholarship by World Press Photo to do a master’s degree in Fotonarrativa and New Media, in Mexico City, and I attended the Seminar of Contemporary Photography at the Centro de la Imagen. 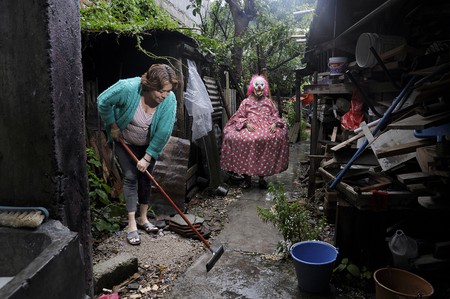 Because Of Moisture | © Diego Moreno 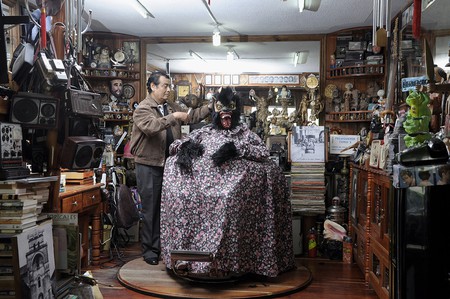 You’ve stated that your ‘Guardians of Memory’ series was deeply influenced by your experiences as a child growing up in Chiapas. Does your upbringing inform every project you take on?

Growing up in Chiapas and being raised for 24 years by my maternal grandmother have undoubtedly given me a peculiar way of seeing the world. I grew up immersed in Catholic liturgy, legends and rituals, but also in the indigenous ancestral world, as Chiapas is a clash of cultures and beliefs, of racism and of a deeply rooted sense of belonging. I think it’s necessary to talk about what surrounds us, unravel it and question it, because that is precisely how we figure out who we are and where we are going.

So for me, childhood is extremely important; it’s a fundamental part of our existence, crucial in developing us as individuals. In my case that part of my existence is blurred, mutilated and incomplete, but making use of fiction through photography has allowed me to re-inhabit and recreate my childhood, using fantasy as an evolutionary tool. 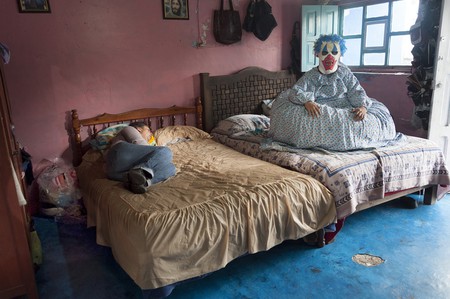 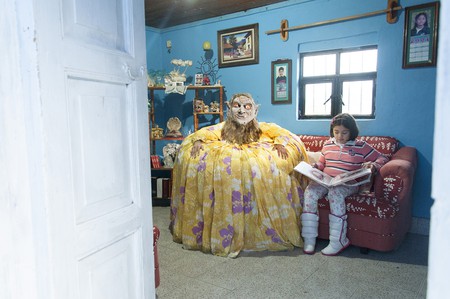 Is photography a cathartic process for you?

Totally. Photography is a stabilising force in my life. It’s made it possible for me to understand the human condition in a deeper way, eclipsing reality and giving me the chance to inhabit another place despite living in an increasingly hostile and violent world. I’ve been able to understand my family and what surrounds me and to learn to understand others and not just to justify their actions or make value judgements. I faithfully believe that photography is a transformative experience. 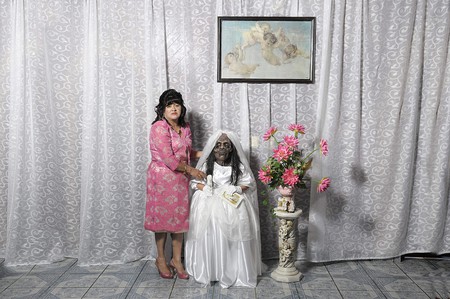 A Type Of Indulgence | © Diego Moreno 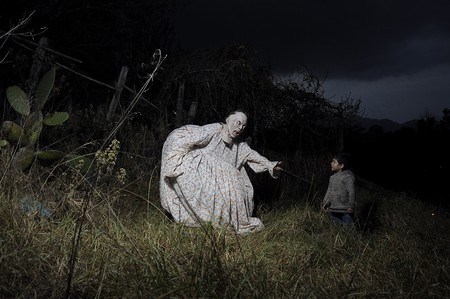 What was the inspiration behind your ‘Guardians of Memory’ series?

This project arose due to my great aunt who suffered from scleroderma. It’s a disease that covers all your organs with muscle; the skin thickens and retains fluid. She was born this way, which led some to believe that she was paying the price for some past family sin. She suffered a lot of abuse from much of the immediate family as a result, but as a child I regularly used to visit her and she fascinated me. She was very affectionate and always used to wear these large, floral patterned dresses and aprons, where she kept the candy that she’d give me in secret.

In 2006, she came to live with me and my grandmother full time and we developed a closer relationship, but a year later she passed away at my side due to complications from her illness. This event affected me so much that after her death I became obsessed with rebuilding her image so I could feel close to her again. That’s when I remembered that as a child, my grandmother would take me to Mass to celebrate the Virgen de Merced. Characters dance around every September 22nd to announce the feast of the Virgen and rather than scaring me, these supposedly monstrous ‘Panzudos Mercedarios’ just reminded me of my great aunt. 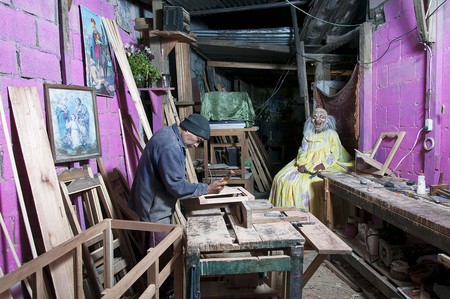 The Panzudos Mercedarios take part in a kind of ritual dance, with each Panzudo symbolising sin. Naturally, this reminded me of both my aunt and me, as I was also to some extent at odds with my family, an outcast. It was like a lightbulb went off in my head, as I realised the storytelling potential. I began to develop the characters so as to reconstruct my great aunt, working out exactly how to create everyday domestic scenes into which they could slot, creating a photograph that would be filled with symbolism and psychological significance. 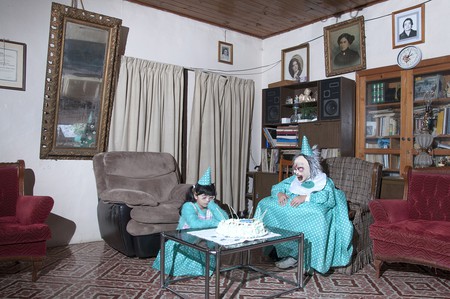 And what’s the message behind the series?

For me, the ‘Panzudos Mercedarios’ have come to represent the inhabitants of my own unconscious and a passage to another realm. I know they’re not real people but they provide a framework for understanding the human condition, allowing me to reveal secret truths and reflect upon all misunderstood and marginal things. For me they’re endearing and I identify with them deeply. Part of the nature of this project is to unravel the pre-established order and re-create new possibilities of being. The idea of ​​a ‘monster’ shouldn’t be frightening, it should be beautiful; in fact, our world would surely be a little more magical if these figures lived among us. 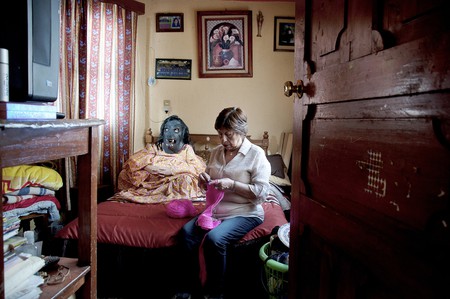 Tell us a little more about the ‘magical figures’ that you used in the series and the people that participated.

I, along with my aunt, built all of the characters; the clothing consists of many meters of cloth, Halloween masks and concealed tyres which gave the characters their huge size.

It was challenging to leave my comfort zone. Most of my previous photographs had been shot in my home and with my family but for this project, I stepped into other people’s personal space. It was fascinating and enriching to be able to interact with new people, who always showed great excitement when I told them about the nature of the project. 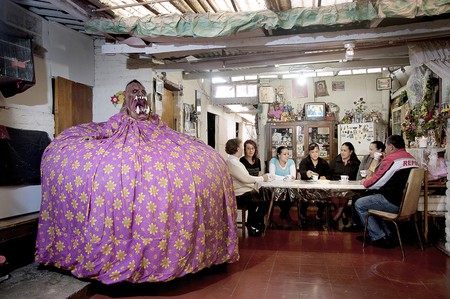 If you had to choose, what’s your favourite photograph from the series and why?

There was something that happened to me when I took the photo titled ‘El Presagio’; I was moved to the point of tears. I felt like my great aunt had returned, just for a moment, and I saw her again. The scene reminds me a lot of her last days with me; absent and sad at the thought of dying. What I had intended to do with the project had actually come true – I was able to reconstruct her image. That feeling will stay with me forever, without a doubt. 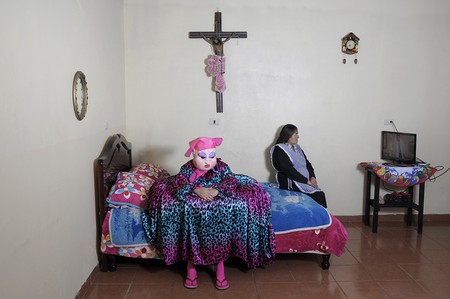 Which photographers do you look up to and why?

There are some great photographers with whom I share an approach to photography, namely the Mexican Maya Goded and the South African Roger Ballen. I’ve actually had the opportunity to speak with Maya Goded, and she reiterated that photography is all about your own personal search, and realising that you should look ahead first and rationalise later. Photography always helps you understand the world through your own unique perspective and one of the things which I believe completely is that you must come to terms with monstrosity in order to create your own beauty. 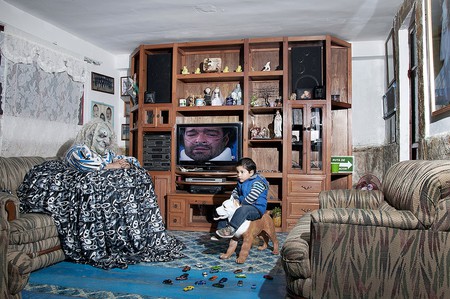 If you weren’t a photographer, what would you be doing?

I hope not to sound like an absolute cliché, but had it not been for photography I’m almost certain I would not be writing this. As a teenager, I always reached very low points; some people turn to religion but, for me, photography was what really saved me and I couldn’t see myself doing anything else.

You were recently named ‘One to Watch’ by the British Journal of Photography. What are your plans for the future? Will you be doing anymore series similar to ‘Guardians of Memory’?

Having been chosen by The British Journal of Photography is very satisfying and exciting, as it helps bring young people doing interesting and creative things with photography and visual arts in Mexico to the fore.

I’m close to finishing ‘Guardians of Memory’ and I’m still working on the series that I’ve been doing for almost five years with my family, titled ‘Ensayo para una despedida’. Just recently it dawned on me that the root of this project is domestic violence, as well as the body which craves affection yet is mistreated and mutilated. I’m still figuring out how to bring it to an eventual close. 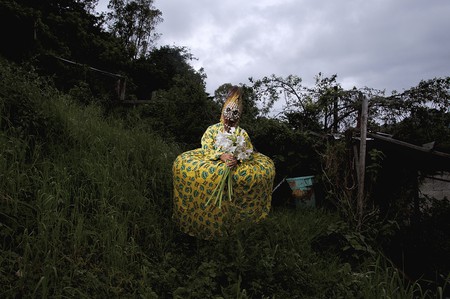 On the other hand, I’m working on another project called ONÁN, which is a record of the intimate encounters I have with men, partly due to the need for affection mixed with a hint of nostalgia, as if I were seeking to somehow capture love, loss and desire. Once again, the anti-hegemonic body becomes the focal point, along with sex, as a tool for storytelling. Without a doubt, I continue to speak about my, in this case, profoundly homophobic and conservative surroundings. I hope to make it into some kind of photobook or fanzine, with each image accompanied by mini-stories taken from my diaries. I believe that my interest in my surroundings will only keep evolving.

You can further explore the work of Diego Moreno on his Instagram page.