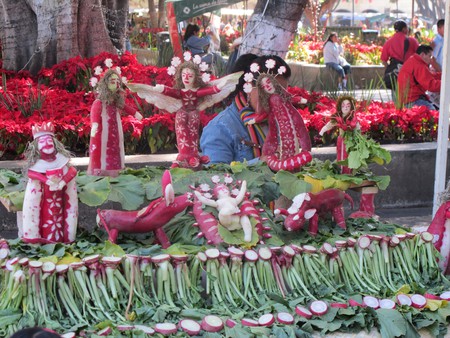 Oaxaca is one of the most culturally traditional of Mexico’s 32 states and so it’s no surprise that it hosts what is perhaps the country’s quirkiest Christmas celebration. Each December 23rd, during La Noche de los Rábanos (The Night of the Radishes), hundreds of competitors create highly intricate sculptures from – you guessed it – the humble radish, fighting it out for a large cash prize, and, more importantly, the pride of being crowned champion. Here’s everything you need to know.

Picture a traditional nativity scene, featuring all the protagonists you’ve come to know, love and associate with these Christmassy masterpieces, but with one small, and significant, twist – everything is carved out of radishes. The scenes recreated by both the skilled horticulturalists and amateur radish-carvers are typically festive or religious in theme, with the nativity being a particular favourite. However, the arrival of the Three Kings is also regularly spotted, as are artistic depictions of the Virgen de Guadalupe and even folklore figures such as La Llorona, which make good use of the red and white contrast offered by this root vegetable. You might be wondering why exactly the typically tiny radish takes centre stage, but if you are you’ve probably never seen a Mexican radish. Bred and grown specially for this event in Oaxaca, they’re monstrously large and impressively weighty, which is ideal for the competitors, who have far more raw material to work with when sculpting their scenes. 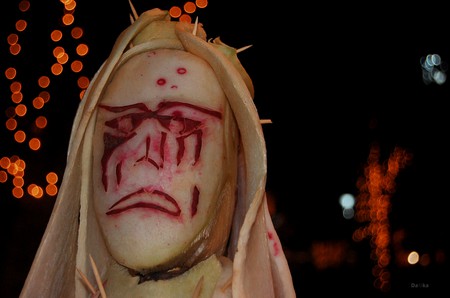 The roots (pardon the pun) of the Night of the Radishes festival go way back to 1897, when it was held in Oaxaca’s Plaza de Armas rather than at the current location of the spectacle, Jardín de la Constitución. However, the origins of this uniquely weird and wonderful festival go back to the Vigilia de Navidad, a market which was once held every December 23rd. At this market, fruit and veg vendors would hawk their wares just in time for Christmas, and rumour has it that they began to carve figures from radishes to make their stalls more attractive. Gradually, over time, buyers began to seek out these once decorative figures, which led to greater demand and, eventually, an elaborate and impressive festival which endures to this day. In fact, the festival is so popular that authorities actually monitor the growth and distribution of radishes specifically allocated for the registered competitors of that year’s Night of the Radishes. 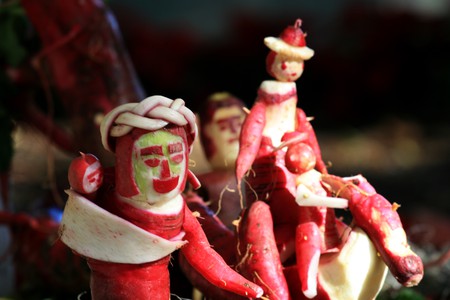 The whole event itself is remarkably brief, lasting just a few hours, during which time thousands of curious spectators and lucky travellers get to witness these handcrafted creations for themselves. The brevity of the event is no reflection on the hard work and preparation that goes into the competition entries though; three days before the start of the festivities, competitors begin carving their radishes (the seeds of which are sown around three months ahead of time). Year on year the designs become more spectacular than the ones that preceded them, leading to a high sense of anticipation among the general public who come to witness the festival, although you ought to get there early as long lines wind through Oaxaca’s streets as residents and tourists try to get a look at the marvellous creations. Alongside radish figurines and ornate scenes, two other horticultural products have been added to the roster as time has gone by – flor inmortal (a Oaxacan flower which is dried before being used to model with) and totomoxtle (the husk that covers corn on the cob). Vegetables aren’t the only draw of the evening though, as once the prize giving has been wrapped up, fireworks and music light up the skies and streets of Oaxaca City. So, what are you waiting for? Get yourself to Oaxaca to witness Mexico’s quirkiest celebration. 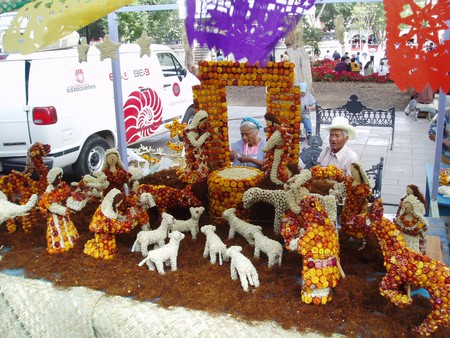