Mexico's Cenotes, the Hidden Gems of the Yucatan 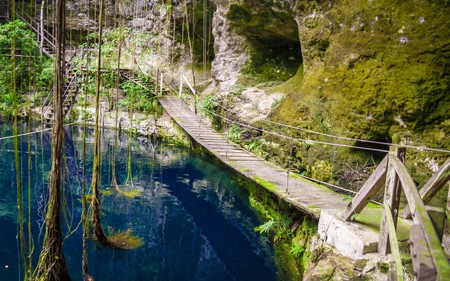 There are thousands of cenotes dotted all over Mexico’s Yucatan Peninsula, and their existence is as much a defining characteristic of the region as is the distinct geological feature from which they result. Once revered by the ancient Mayans as sacred wells, they are now magnets for tourists, adventurers, and explorers alike. This feature explores all there is to know about cenotes and where to find the top three. 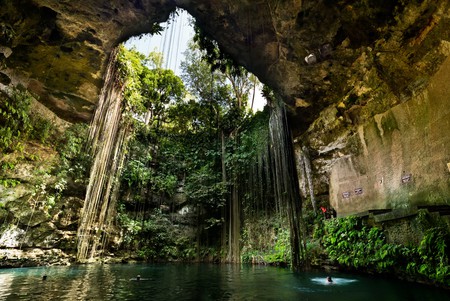 Book our nine-day trip to Mexico’s Yucatan peninsula and let our Local Insider take you off the beaten path with the best hidden gems and local experiences.

The Yucatan, Limestone and the Birth of a Cenote

The Yucatan Peninsula is characterized by its mainly limestone bedrock. Limestone is a soluble type of rock, and if exposed to percolating water for long periods of time, say millennia, limestone will eventually dissolve. In the resulting karst landscape, the porous bedrock does not allow for fresh water to accumulate above ground in forms of rivers and lakes. Instead, drainage occurs subsurface as rain water filters through the perforated rock and collects underground where the process of erosion continues.

At times, the surrounding bedrock destabilizes so much that it collapses to reveal the cave underneath, marking the birth of a cenote.

Different types of cenotes exist. Some are deep water-filled shafts with strictly vertical walls, while some are shallow but wide. Other cenotes are semi-open with part of the water surface hidden from view in a cavern. Entirely cavernous cenotes are another type and can be reached only through holes in the ceiling or by walking through tunnels. 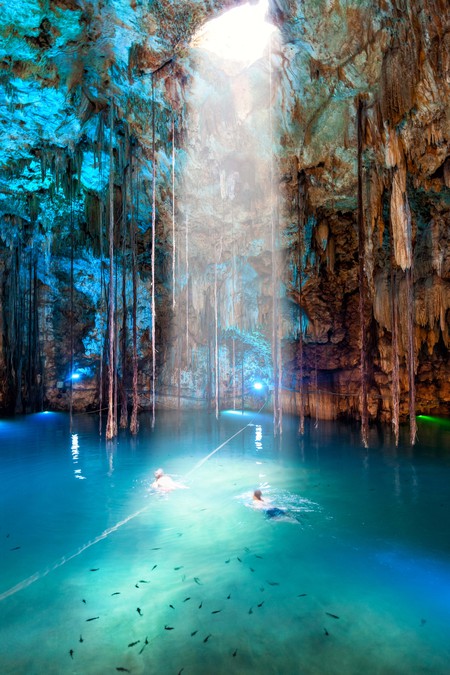 An even more complex picture emerges underground. Cenotes are access points to vast networks of largely unexplored cave systems. In the north and northwest Yucatan, these appear more on a vertical plane, while along the Caribbean coast, they expand horizontally. The Grand Cenote near Tulum gives access to the Sistema Sac Actun, which is the second longest cave system of 335 kilometers in the world. Indeed, two of the top five longest cave systems are located in the Mexican state of Quintana Roo on the Yucatan Peninsula.

With the help of modern technology, cenotes have been linked to the extinction of the dinosaurs. Aerial mapping of the Yucatec sinkholes revealed a circular pattern through the jungle. Further investigation confirmed that this higher-density ring of cenotes marks out the rim of a colossal meteorite crater, which has been dated to the boundary between the age of Cretaceous and the age of Paleogene, some 66 million years ago. 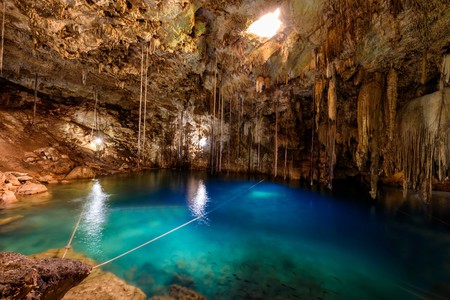 Historical Significance for the Ancient Maya

The word cenote is derived from the Yucatec Mayan word dzonot, meaning well. Long before the advent of modern technology, the inhabitants of the Yucatan understood the critical importance of the local freshwater sinkholes. The ancient Maya, one of the most advanced indigenous civilizations of the Mesoamerican continent, migrated to the Yucatan Peninsula between 500BCE and 250CE.

In a region devoid of rivers or lakes, such as the Yucatan, cenotes provided year-round access to fresh water. Their sheer number and ability to sustain large human settlements formed the foundation on which a sophisticated society could be built. All of the biggest cities that the Maya built between 300CE and 900CE, such as Chichen Itza and Uxmal, were erected in the vicinity of several cenotes. The city of Mayapan, situated 100 kilometers west of Chichen Itza, had some 40 cenotes within its city walls to supply up to 17,000 inhabitants.

Cenotes were so vitally important for the survival of the local population that they were deeply embedded into the religious belief system. The Maya believed cenotes to be a gateway to Xibalba, the underworld, and the god of rain, Chaac, was believed to live at the bottom of these sacred wells. The Maya performed rituals and ceremonies at sacred cenotes to ask for rain and good crops.

The most famous of these is the Sacred Cenote near the ancient Maya city of Chichen Itza, located in the northwest of the Yucatan Peninsula. From its depths, archaeologists have recovered artifacts of gold, jade, and pottery as well as human remains whose injuries are consistent with human sacrifice.

While human sacrifices no longer play a role in present-day Maya culture, some descendants of the ancient Maya still pay their respects to the mythical inhabitants of cenotes. 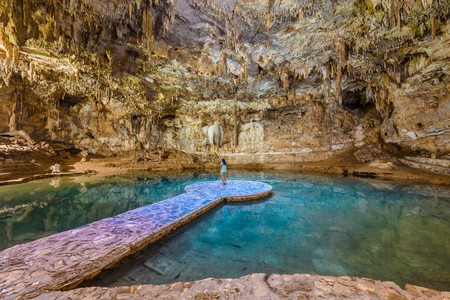 Meanwhile, cenotes have become a popular destination for tourists, adventurers and explorers alike, with swimming, snorkeling, and even diving being popular activities depending on which cenote you visit.

One of the most spectacular open cenotes is the Cenote Ik-Kil, 3km (1.8mi) from Chichen Itza. Its sheer vertical walls are lined with vines and flowers and give way to crystal-blue waters at least 40 meters deep and populated by catfish. It’s ideal for swimming and snorkeling. Visitors have to pay an entrance fee but will find the site offers plenty of amenities, including restrooms, cabins, and a restaurant.

The partially open Grand Cenote does its name justice by offering something for swimmers and snorkelers of all ages. Located near Tulum, the cenote has partially submerged tunnels connecting open-air areas, underwater limestone formations to explore and docks on which to sunbathe. Bats hanging from the ceiling complete the exotic picture. As an access point to the world’s second largest cave system, the Grand Cenote is also a popular spot for divers.

Cenote Dos Ojos, Spanish for two eyes, lies between Playa del Carmen and Tulum. It’s a great place for snorkeling as rays of light pierce the clear turquoise waters and illuminate the stalagmites jutting out from the depths. Dos Ojos is also an access point to a flooded underwater cave system spanning over 80km (50mi), making it a popular destination for diving outlets in the area. 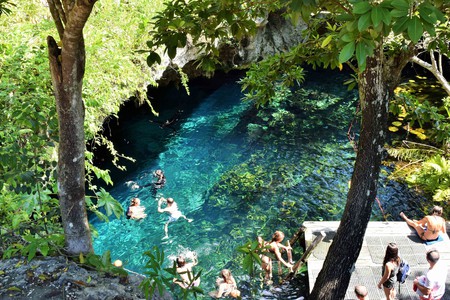 Cenote Oxmal is one of the several cenotes in and around the town of Valladolid and is perhaps the least-known cenote in the area and comes with few amenities. The entry fee is as spectacularly low as the cenote is beautiful and tranquil. The waters are said to be 67m (220ft) deep, so thrill-seekers can head for the surface level and plunge into the waters from a height of 18m (59ft) to 22m (72ft). 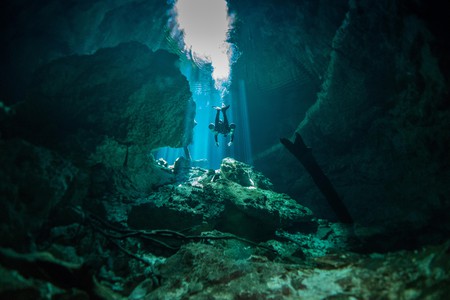