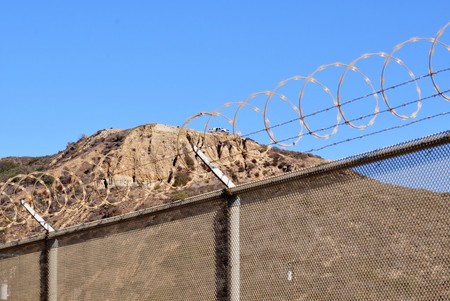 The border between the United States and Mexico has long inspired poignant artwork that raises questions about national divisions, identity, and origins. At this moment, against the backdrop of President Donald Trump’s hardline stance on immigration, border artists have an even greater sense of urgency. The 1,954-mile (3,145-kilometer) expanse is the most frequently crossed border in the world, and these artists are determined to challenge the president’s narrative that Mexican immigrants are bringing nothing but drugs and crime into his country.

The son of a Mexican mother and Chinese father, Richard Lou is a border-area artist who has spent decades exploring identity issues in his work. In 1988, Lou set up a freestanding door at the US–Mexico border which served as a symbolic invitation to migrants.

“When Mexican migrant workers cross, they are forced to do it in a humiliating manner,” Lou explained to the Border Arts Workshop. “They have to crawl under the barbed wire or through the drainage pipes and run in the darkness like frightened animals.”

A deeply political work, the door was also inspired by Lou’s own personal experiences: immigrant officials deported his wife while they were dating and raided her workplace, causing profound distress to both of them. 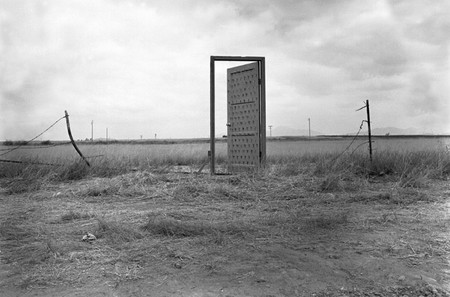 In 1997, Marcos Ramirez (known by his nickname ERRE) built a two-headed wooden horse and installed it at the international divide between Mexico and the United States. A reference to the Trojan horse from The Iliad, the artwork served as a reminder of one of the most traumatic chapters in his country’s history. In the 19th century, Mexico lost more than half of its territory, including Florida, Texas, Nevada, and Utah, as well as large parts of Kansas, Colorado, and Wyoming.

“From a Mexican point of view, there is a wound,” Ramirez told the LA Times in 2016. “You are taught in school that there is this territory that was lost. But we don’t have a scar from that wound. So that’s the thing for both of us — let’s mark the wound, let’s make the scar.”

Nevertheless, Ramirez’s artwork was called “Toy An-Horse,” and also suggested a playful, friendly side to the cultural exchange between Mexico and its northern neighbor. 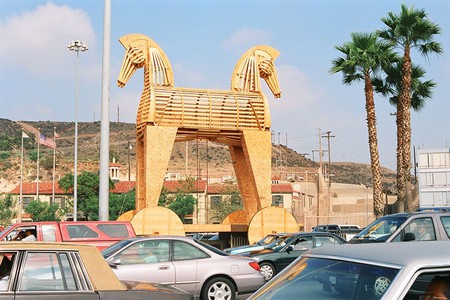 “Paseo de la Humanidad,” or “Parade of Humanity,” is a mural on the Mexican side of the border in Nogales, Sonora. Created by Alberto Morackis, Alfred Quiroz, and Guadalupe Serrano, the mural depicts eight migrants trying to cross through the desert. One group are moving north, led by a figure dressed in an indigenous costume and carrying a baby. The migrants heading south are bringing symbols of the developed United States, such as a dishwasher and the Statue of Liberty. However, this group of border crossers are also carrying a body, to represent the hundreds of migrants who have died traversing the dangerous desert corridors leading to the United States. 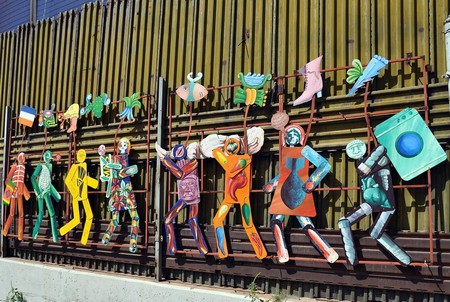 Tijuana-area artist Alberto Caro has also powerfully memorialized those who have died on the northward journey by fixing a series of brightly painted coffins to the Mexican side of the border. Each coffin represents a year and the number of dead, with the peak year in 2000, when around 499 migrants died.

In 1994, the United States government launched Operation Gatekeeper, the first of a series of measures designed to curb immigration from the southern border. However, the increased security only forced migrants to take ever more remote and dangerous routes. Between 2000 and 2016, Customs and Border Patrol documented more than 6,000 deaths along the southern border. 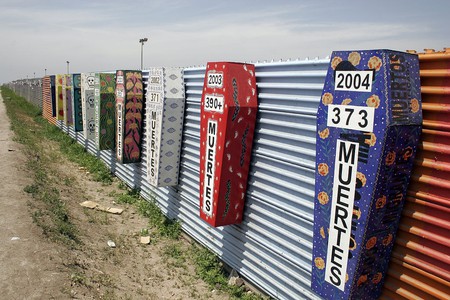 In 2011, artist Ana Teresa Fernández set up a ladder against the Tijuana–San Diego border wall and began painting it a powdery sky blue so that it disappeared from sight. The “Erasing the Border” project was a minimalist work and an incredibly powerful one. The beach on the Mexican side of the border is a popular spot for families, who are forced to face the looming, threatening metal structure. Teresa Fernández’s mural offers a vision of the location before the border was in place, and suggests the possibility of returning to a world without aggressive walls. 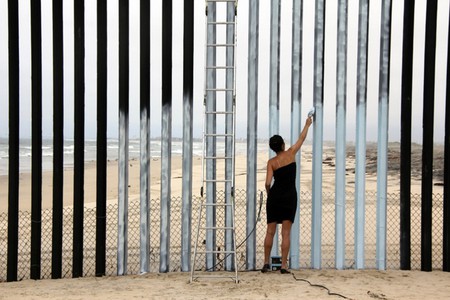 “Erasing the Border” | © Courtesy of Ana Teresa Fernández
Give us feedback