Everything You Need to Know About Mexico's Secret Sauce 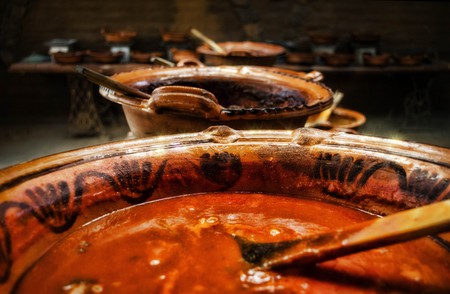 While essential to the country’s cuisine, Mexican mole is not easily defined. It’s a sauce that guards its secrets well. With most recipes including 20 or more ingredients, this iconic Mexican dish may not be the most approachable culinary treat, but when dissected to reveal its richness and complexity, becomes impossible to pass up. 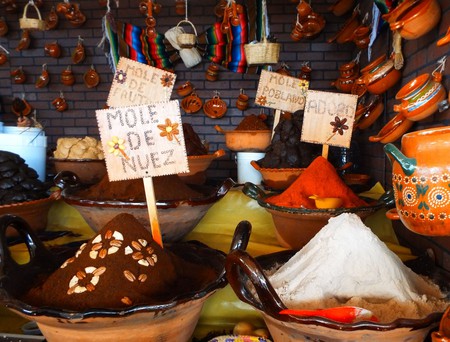 The word mole is a version of the nahuatl word “mulli” which simply means a mix or concoction. While there are many stories of mole being “discovered” accidentally by nuns in the colonial kitchens of central Mexico, historical evidence suggests that long before the Spaniards arrived in the Americas, the indigenous populations in Mexico made a similar dish for festivals and special occasions.

The ingredients of mole – and there are many – were traditionally ground on a metate, a type of flat mortar and pestle, and up until probably fifty years or so ago were still made in this way. Groups of women would gather together to mix and grind out the mass quantities of mole paste needed for weddings, holidays or baptisms, sitting in a circle on the floor, rythmically moving the metate stone up and down, up and down, until the paste reached the consistency they wanted. The labor-intensive process of making mole meant that it was strictly a once or twice a year delicacy. 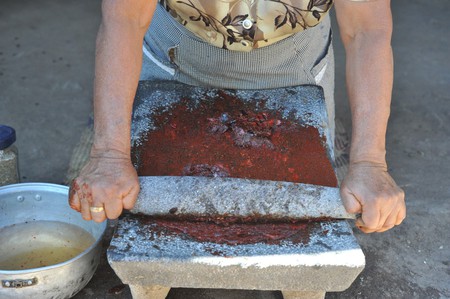 Few things tie together all moles beside the process of making them, but only about half a dozen of the over 70 kinds of mole don’t have chiles (peppers) in them. Yes, you heard right, there are over 70 types of mole made in Mexico despite the fact that the world most clearly associates mole with the dark, chocolatey mole negro, sometimes called mole poblano. These wide-ranging recipes start with basics like chiles and nuts, and go on to include fruits, fresh herbs, dried herbs, old tortillas, even animal crackers.

Each combination is singular to its chef and often families have a special recipe passed down through the generations. All these ingredients are ground on the metate (or now a day in a food processor) and blended with chicken or vegetable stock until reaching the consistency desired. Traditionally moles were eaten with animal proteins that could be acquired locally, like wild turkey, and today most moles are eaten over chicken or pork, with some delicious exceptions being duck, rabbit or goat.

Moles are often divided up by color – mole negro (black), mole verde (green), mole amarillo (yellow) and mole rojo (red). Which is not to say you will find moles that looks like the color wheel. Yellow mole is sometimes bright orange, red mole can be almost brown, mole negro a creamy, coffee color. Some moles are sweet and creamy, others more savory and grainy. There are few rules and lots of delicious exceptions. 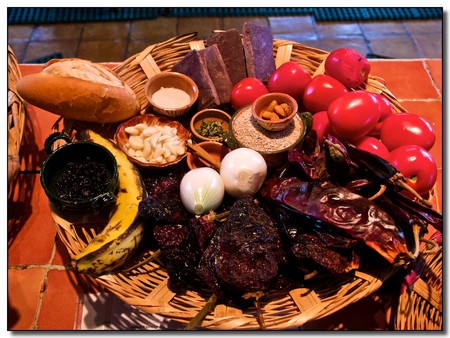 Mole is still a very special dish in Mexico. While today’s restaurants and even streetside stands may sell it daily, people still think of this dish as special occasion fare. That said, the dish’s growing popularity means that more people (including tourists) want to try mole all the time. The town of Puebla in the center of Mexico is famous for its mole, as well as the state of Oaxaca, often called the “land of the seven moles.”

Each October, in the town of San Pedro Actopan, just outside of Mexico City, a mole festival is held where you can not only purchase mole paste en masse, but you can also sit down at one of the dozens of traditional family restaurants that set up stands there, and try it. The important thing is to keep your taste buds open to opportunity. There are so many variations of this delicious dish in Mexico that you are bound to find one that you like.

Mole in Oaxaca │ | © John / flickr
Give us feedback