An Introduction To Julieta Venegas In 14 Songs 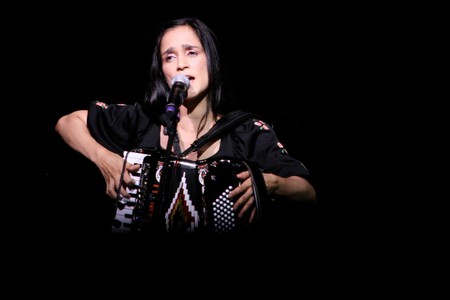 The Mexican-American singer-songwriter-musician Julieta Venegas is widely considered one of Mexico’s most consistent and understated recording artists. Having started her foray into the music industry as a teen, she went solo and has since become a huge star across all of Latin America and Mexico. Known for her multi-talented musical stylings and distinctive eyebrows, here’s your essential introduction to Julieta Venegas in 14 songs.

For a complete introduction to Julieta Venegas, her first steps into the music industry with the reggae/ska band Tijuana No! can’t be ignored. One of its most famous songs, which was actually composed in part by Venegas, was ‘Pobre de ti’. When Tijuana No! reformed for Vive Latino festival in 2010, Venegas made a guest appearance to sing this classic song, and for that reason it has to take the first spot on our guide to this successful singer-songwriter.

The second single from the 2006 album of the same name, ‘Limón y sal’ muses over the ups and downs of relationships, reaching the conclusion that love is about accepting the person for who they are, just like a tequila with limón y sal. It reached number two in both Spain and Mexico and is considered to be one of Venegas’ most popular songs from one of her most successful albums.

The third hit from the album Limón y Sal, ‘Eres para mí’ was originally a duet with Chilean rapper and singer Anita Tijoux. Certified gold in Mexico, it’s another hugely popular Venegas track. The role originally occupied by Tijoux has been covered by numerous artists since its release, most notably the Spaniard Mala Rodriguez during an MTV Unplugged concert.

We go back in time by three years for this next track; ‘Lento’ was the second single from Julieta Venegas’ third album Sí, and has also been the subject of collaborations and covers. During the MTV Video Music Awards Latinoamérica in 2004, Venegas was joined onstage by Mexican hip hop group Cartel de Santa, who added in a few new verses to the original composition. In 2009, the song was the subject of a Portuguese cover. In the following video for the song, Venegas appears with her twin sister, Yvonne.

Venegas’ first foray into the world of solo artist-dom, ‘De mis pasos’ was the first single from her debut album Aquí. The predominantly black and white video sees a youthful Venegas touching more on the alternative rock genre that she was arguably better known for at the start of her solo career.

Taken from Venegas’ seventh and most recent album titled Algo Sucede, ‘Ese camino’ opens with one of the instruments most associated with Venegas and her music – the accordion. It’s currently up for a Latin Grammy for the Song of the Year and deals with the way our childhood shapes us throughout our lives, for better or worse. The beautiful video currently has over 5 million views.

Widely considered to be the most popular Julieta Venegas song, ‘Me voy’ (part of her fourth album, Limón y sal), as well as being certified gold in Mexico, topped the charts in Spain, Italy, Argentina and Costa Rica upon its release. The song speaks of an ex-partner who failed to recognize the singer’s value, and as a result she reluctantly had to leave. With hints of ranchera influence, ‘Me voy’ has an overwhelmingly beautiful pop sound.

‘Andar conmigo’ is another track that garnered Venegas a Grammy nomination for Song of the Year, but was ultimately pipped to the post by Café Tacuba’s undeniably fantastic ‘Eres’. As her record company refused to pay for her to film a video for this song, Venegas financed one herself and filmed it in Buenos Aires with the help of friends and relatives.

A cover of the 1992 Laura León song of the same name, ‘Suavecito’ was sung by Venegas for the film Elvira, Te Daria Mi Vida Pero La Estoy Usando. Apparently, Venegas accepted the offer to reinterpret this classic cumbia rhythm because she never imagined anyone would ask her to cover a Laura León song. Interestingly enough, the song has also been covered by alternative Mexican musician Silverio.

Taken from her second album Bueninvento, ‘Sería feliz’ is an underrated song with an admittedly odd video. Dressed as a nun and surrounded by a backdrop of fake rabbits and singing girls, Venegas sings about what she supposedly needs to be happy, and also how she can be happy without it, given a bit of time.

This track hit number one in Spain, Mexico and Argentina and confirmed the success of her third album Sí. It discusses the changes she feels in herself and her relationship as a result. At the end of the video, four versions of Julieta are hanging on coat pegs in her now empty apartment.

The video for 2010’s ‘Bien o mal’ poses an interesting question at the start — can women marry, have children and be happy? The first single from her Otra Cosa album, the video for ‘Bien o mal’ challenges typical representations of women as they occupy the ‘throne’, wield the sword and fart butterflies. The song lyrics themselves deal more with the fear we have when entering a new relationship.

This 2010 track is from Venegas’ sixth studio album Otra Cosa and won her another nomination for Best Latin Pop Album. Straying from her typical love song preferences, this track pays homage to platonic relationships rather than romantic ones, going as far as to claim at the start of the song that she won’t be ‘touching your flower’.

The final entry on our guide is also taken from her smash 2006 album Limón y sal. ‘Primer día’ shows a different side to Venegas’ typical musical stylings and is sung in collaboration with the Argentinian rapper Dante Spinetta. Mixing reggae, hip hop and pop genres into one track, ‘Primer día’ effortlessly mixes influences from Venegas’ Tijuana No! roots with more commercially successful styles.