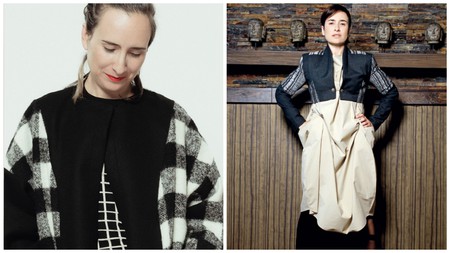 Carla Fernández is one of Mexico’s finest and most successful fashion designers, having long captivated audiences through her engagement with and focus on traditional Mexican handicraft and design. Her work has been exhibited in museums around the world and her designs are sold in both her own boutiques and private stores across Mexico. Here’s everything you need to know about Carla Fernández.

Carla Fernández, born in Saltillo, Coahuila, began her first foray into the world of Mexican culture as a child, traveling with her historian father to several indigenous communities and soaking up the centuries-old practices used there. This wandering spirit lives on in Fernández today, as she continues to visit Mexican communities, borrowing techniques from the artisans who work there and collaborating with them to create exquisite, handcrafted garments. However, she doesn’t merely take inspiration and leave; rather, she collaborates with the artisans, working in conjunction with them for the length of the project and paying them for their contributions and craft. Her brand has sought to both change popular perceptions about indigenous clothing and reconfigure assumptions that working as an artisanal craftsperson cannot be a sustainable career path.

Fascinating carved bangles at #carlafernandez, one of the finds in the super cool Roma neighborhood this afternoon. The carving replicates that of the traditional chocolate grinding tool but the blue is a sublime contemporary touch.

Now based out of Mexico City, Fernández’s two eponymous boutiques can be found in the country’s capital, and she also sells her beautiful designs at the famous Bazaar Sábado in San Ángel, Mexico City. But that’s not to say her appeal isn’t nationwide; she has pieces in a wealth of private stores and boutiques across both the capital and the country. As far as her designs themselves go, they’re obviously known for their indigenous influences and incorporate geometric patterns while remaining modern and contemporary. Best described as striking, her clothing adopts the lines of indigenous fashion yet updates the silhouette. Her designs aren’t all about clothing, though, as she also produces housewares and textile products. The consistent themes throughout all her work are sustainability and the use of indigenous techniques and designs.

After studying art history at Universidad Iberoamericana, she deepened her knowledge of indigenous fashion design by working for both Conaculta and Fonart. Since 2000, she has been the creative director for her namesake fashion brand, Carla Fernández. She not only is rightly recognized as an important figure in the Mexican fashion world (she was named by Quién magazine as one of the ‘Fifty People That Move Mexico’), she also has come to the attention of global fashion circles. In 2008, she was awarded the Young Fashion Entrepreneur of the Year award, and in 2009, ID magazine featured her as one of the best international designers of the moment. Since then, she’s won further acclaim: in 2013, she was awarded the Prince Claus Award for her contribution to societal development, and her designs have been exhibited at several museums and institutions including Mexico City’s Museo Jumex, New York’s MAD Museum, Spain’s MUSAC, and even Massachusetts Institute of Technology.