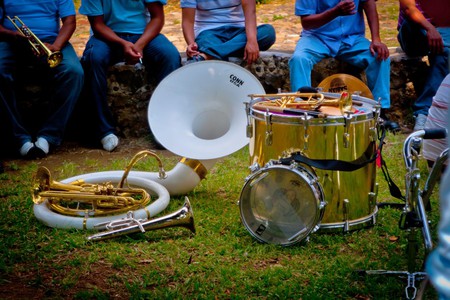 From ska to rock, Latin alternative, pop and heavy metal, the musical genres popular across Mexico are not dissimilar to those that attract attention in other countries. However, despite the presence of these popular genres, musical traditions across the country remain deeply rooted, and while many are now widespread across several states, here’s a region-by-region guide to where the traditional sounds of Mexico first originated.

The north of Mexico may be a vast desert-scape, but it has some fantastic traditional music associated with it. The first and most obvious style hailing from northern Mexico is, of course, norteño (literally, ‘northern’). It supposedly originated near the U.S.-Mexico border in the early 20th century, and is connected to similar styles such as ranchera (a lyrical style focusing on love and patriotism, from which norteño was adapted) and banda. Each northern state has its own distinct norteño style, though; for example, norteño chihuahuense uses a sax as well as the typical accordion.

Outside of norteño music, Zacatecas is known for tamborazo zacatecano, a saxophone, trumpet and drum heavy style of music again closely related to banda, of which the anthem of Zacatecas (La Marcha de Zacatecas) is an example. Durango also has its own musical style, known appropriately as duranguense, which is essentially música norteña that uses brass and wind instruments rather than the accordion and string instruments (although drums are still featured heavily). All across the north, you’re likely to hear narcocorridos, too; they derive from traditional corridos but tell the story of famed narcos and drug traffickers instead.

The Baja California peninsula, which is often considered somewhat of an outlying Mexican territory both in terms of geography and cultural influence, is another area in which norteño music dominates; however, Baja tends to bring in more modern influences to its traditional musical style, through the use of cumbia rhythms and rock. What’s more, musical trios known as cochis are regularly seen playing polkas, norteño music and corridos.

Moving from one peninsula to another, and from north to south, the Yucatán Peninsula’s musical traditions are very different to those in Baja. Influenced heavily by indigenous styles and Spanish music, there is also a connection with Cuba in Yucatán. This is most notable in the son yucateco, which is often considered one of the influences for the Cuban bolero. Unsurprisingly, boleros are also a popular style of the region, as is the trova grouping. These trova trios play all sorts of genres from bolero to, at times, ranchera. Finally, a popular musical and dance style of the region is música jarana. This is a style which utilizes the guitar known as the jarana as the centerpiece of its instrumental line-up.

Veracruz is known for its very particular musical style, the African influenced son jarocho, of which La Bamba is perhaps the most well-known example. As with the trova groups of the Yucatán Peninsula, the jarana guitar is heavily featured, but the harp also makes for an important part of the line-up. Cuban danzón is also a popular musical genre in this state, as are boleros and the huapangos typical of Mexico’s huasteca region.

As with most Mexican states, Guerrero has its own son, known as the son guerrerense, which combines strings and percussion. However, the son is by no means the most popular musical style of the region, as the corrido also remains popular. Traditional corridos are closely related to ballads, and feature a strong narrative that is typically linked to everyday events and concerns.

Chiapas, on the other hand, is particularly known for its marimbas, as well as sones chiapanecos. Oaxaca too has its own style of marimbas and a perhaps more indigenously influenced style of son known as the son istmeño, which often includes lyrics sung in the native Zapotec language of much of the state. La Llorona is a key example of a son istmeño, and one of the most notable proponents of the style is singer Lila Downs. As well as indigenous music, Oaxaca has a brass band genre with supposedly Balkan roots, known as tambura oaxaqueña.

Finally, Mexico’s Costa Chica region – that’s to say, Guerrero and Oaxaca – also has a strong tradition of the chilena genre, which as the name may imply, originated in Chile before being brought to Mexico in the 19th century.

Western Mexico, and Jalisco in particular, is undoubtedly most famous for mariachi. A mariachi ensemble consists of stringed and brass instruments, alongside the staple vihuela (five-stringed) guitar. It is perhaps most famous for the associated charro ‘costume’ which mariachis regularly don, sombrero included. One of the most famous styles of music that mariachis play is the son jalisciense, of which La Cucuracha is a great example, although rancheras are closely associated with mariachis too. Throughout Jalisco, Colima and Michoacán the abajeño style is regularly seen in more indigenous communities. For example, Michoacán Purépecha’s are known for this style, alongside pirekaus (typically a love song).

Other indigenous influence in the traditional music of the region comes from the huichol people. In Nayarit, Huichol bands are still popular and play rancheras to corridos. Moving further up the coast to Sinaloa and those corridos become distinctly more narco influenced; this area is known more for its narcocorridos and love of banda (a style very similar to polka), which is most closely associated with this state. Colima is also known for enjoying banda.

Central Mexico may not be vast in size per se, but it includes a significant number of states, including the capital Mexico City, and as such has several styles of music associated with it. Similarly to Veracruz, Cuban danzón is a popular genre in Mexico City, as are traditional dance and musical genres such as tango, mambo and rumba. The Mexican take on bolero was supposedly begun in Mexico City; however, ska is also a popular genre in the capital, and many of Mexico’s most successful and popular ska groups are from there, notably La Maldita Vecindad. Similarly, cumbia, which has its roots in Colombia, was adopted by Mexican musical culture and started out life in Mexico City. Nowadays, you can find all sorts of variation on the classic cumbia rhythm across the country.