A Guide to Mexico's Most Essential Chilies 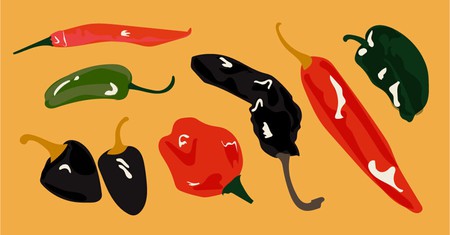 Many people think of chilies as having one simple purpose: They add heat. So does it really matter which one you choose? In Mexico, this question is borderline offensive. With more than 150 varieties available across the country, and thousands of ways to prepare them, Mexican chilies are carefully selected to add heat and, more importantly, heaps of flavor to a dish. Whether they’re sweet, fruity, smoky or earthy, Mexican hot peppers form the base of every meal here, and have become part of the national identity. You’re bound to come across these varieties on your trip to the world’s chili capital. 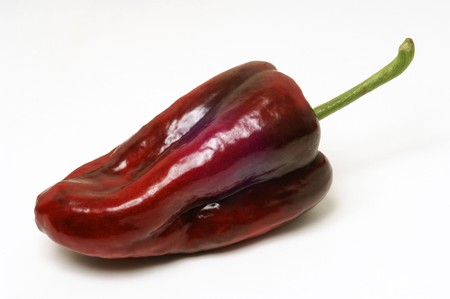 Originating in the state of Puebla, the poblano is a large green chili most commonly used for chile rellenos (peppers stuffed with meat and cheese) which is sometimes served with a spicy tomato-based sauce. The fun (or deadly) thing about poblano chilies is that you never know what you’re going to get. Most tend to be pretty mild, but every now and again you can get some real eye-waterers, so approach with caution!

You wouldn’t think it, but the ancho chili is actually a dried poblano pepper. What was once a large, bright green chili, if left to ripen and then dried for several days, shrivels up and turns a dark red-brown (sometimes almost black). The late harvest and drying-out process allows this Mexican pepper to develop a deliciously sweet, fruity flavor. These are perfect for grinding and making into a delicious mole (a sweet-spicy sauce or marinade often made from fruit, chocolate, nuts and spices) or an enchilada salsa. 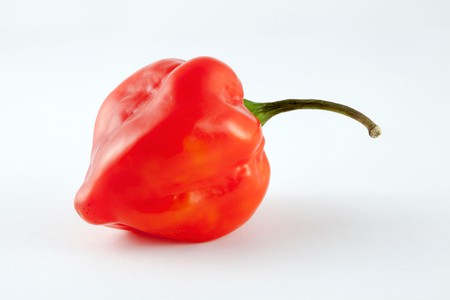 They may be small and cute-looking, but don’t be fooled: habanero chilies can be lethal. Rated 100,000-350,000 on the Scoville scale, these are one of the hottest chiles Mexicanos (back in 2009, it was named one of the world’s hottest by Guinness World Records). While most commonly red or orange, habaneros can be white, brown, yellow, green or purple, depending on how early they’re picked. They’re commonly used for fiery-hot salsas and are most popular in the Yucatán peninsula, the largest producer of habanero chilies. 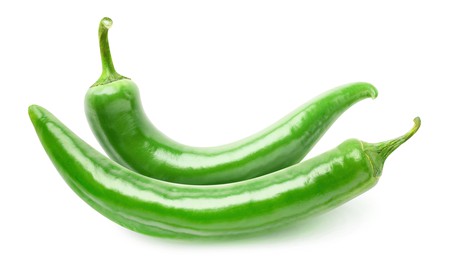 Often mistaken for a jalapeño, the Puebla and Hidalgo-native Serrano pepper is a meaty green chili between 1in and 4in (3cm and 10cm) long. They can vary hugely in spice levels depending on how they’re cooked and how early they’re picked (some are even yellow, red, brown or orange if left to over-ripen), but they’re largely considered to have a comfortable medium kick. You’ll find serrano chilies used for flavoring salsas, or served pickled as a garnish. 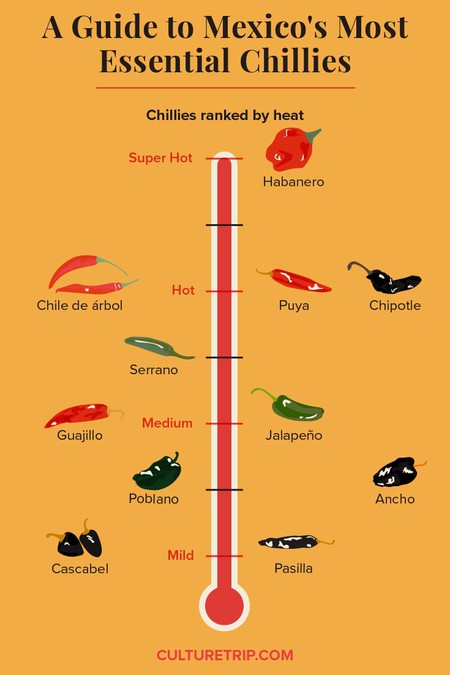 A dried form of the fresh chilaca pepper, pasilla (literally meaning ‘little raisin’) got its name from the dark and wrinkled skin that forms after dehydration. Because of its rich, sweet flavor, it’s often used in sauces to accompany meat or fish. The Oaxacan pasilla, a slightly smoked version, is delicious and can form the base for mole.

Accounting for around 30 percent of Mexico’s chili production, the jalapeño is an undisputed favorite in the country and beyond. This is probably due to its versatility: Jalapeños can be pickled, stuffed, fried, smoked and even jellied. You’ll most commonly see them either pickled and diced over nachos, or served whole and lightly charred on the grill as a tasty street taco side. 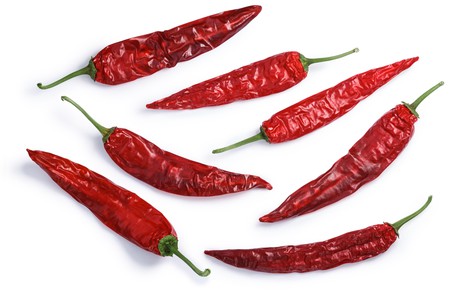 The guajillo, a dry, 4-6in (10-15cm) chili with a deep red color, is considered to be pretty mild by Mexican spice standards, and is mainly used for making rich, sweet sauces or meat marinades. The dried chilies are deseeded, soaked in water and then blended together to make a thin paste ready for cooking. The most popular use of the guajillo pepper is in sauces served with tamales (steamed, stuffed dough), pambazos (fried bread) and mole.

The puya – a tiny, bright red chili with tough skin – is very similar to the guajillo pepper, only spicier and smaller. Just like the guajillo, puya chilies are commonly ground up into a paste and used for sauces and meat marinades. They can also be lightly ground as a chili dust and sprinkled over dishes for that extra fiery finish. Spicier than the jalapeño, but not as hot as habanero peppers, puya is the perfect Mexican chili if you want to step it up a little, without the risk of your lips going numb. 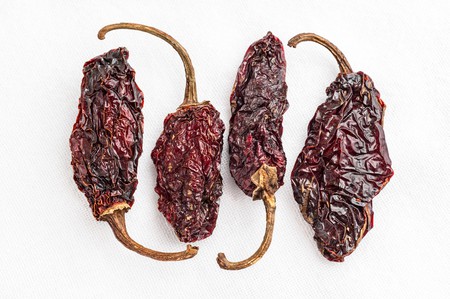 You’re most likely familiar with this name: it is one of the most famous sauces to have come out of Mexico. The name, of course, comes from the vital ingredient that gives the sauce its smoky, medium-spice flavor: the chipotle chili. Not many people know this, but chipotle is actually just a smoked, dried version of the jalapeño. It’s picked at the very end of the ripening process and then placed in a wood-fire box for several days, turning the fresh, green jalapeño into a dark red, shrivelled chipotle chilli. 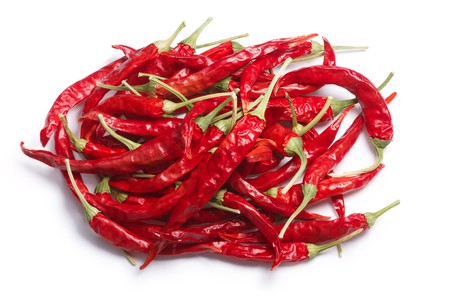 Probably the most attractive-looking of the Mexican peppers, chiles de Arbol, with their long, bright red bodies and even brighter green stems, have captured the imagination of Mexicans for centuries. Because of their beauty (and because they don’t lose their color once dried), they’re often used as wreath decorations or as a colorful dish garnish. But they’re not just a pretty face: with a heat index of up to 30,000 Scoville units, these potent chilies pack a huge punch. Most similar to cayenne pepper in spice, flavor and aroma, chiles de Arbol are popular for adding some fiery heat to salsas.

Cascabel can be found fresh or dry, but the dried version (small, round and a dark red-brown color) is the most common. The name cascabel, meaning “jingle bell” in Spanish, comes from the sound the dried chilies make when the seeds rattle inside the hard skin. With a mild, earthy and sometimes smoky flavor, cascabel is most often blended with tomatillo (a small, green Mexican tomato) and served as a side salsa.