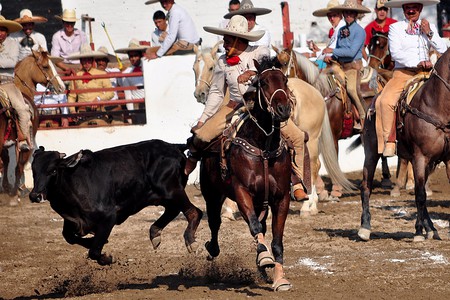 As set out in a presidential decree of 1933, charrería is the official national sport of Mexico and is analogous to rodeo in the United States, albeit a much more stylized, artistic version. Focusing on competition between teams of riders, modern charreadas (rodeos) are normally held on Sundays and are a huge event in many smaller communities.

Originating with the arrival of horses from Spain in the 16th century, charrería has roots in the hacienda (ranch) culture of western Mexico in particular, although it enjoys nationwide popularity. In the beginning, charreadas (although they weren’t known as such then) took place between farm workers looking to show off their horse-riding and wrangling skills. However, with the Mexican Revolution in the early 20th century came the end of the hacienda and so the informal competitions between charros (riders) developed into formal charreadas and scored contests. By 1921, the National Charro Association had been established and in 1933, the presidential decree that declared charrería the national sport of Mexico was announced.

Modern charreadas feature a total of nine different skills events, known as suertes, and a female rider event called escaramuza, in which the charra rides sidesaddle and demonstrates her graceful equestrian ability. Judging is strict and competition is tough, especially given that both horses and riders often start training to compete in charrerías at the age of three. Speed, style, and precision are the orders of the day at these spectacular, traditional events. Some of the skills charros must master to be in the running include cala de caballo, which involves demonstrating the obedience and strength of the horse: galloping at full speed, the horse is brought to an abrupt halt before standing on its hind legs and turning to one side. One of the most difficult maneuvers is known as piales en el lienzo. This involves lassoing the animal by its hind legs until it comes to a complete stop.

Nowadays, the charreada is strongly associated with the state of Jalisco, in western Mexico. This is unsurprising, considering that charrería developed alongside mariachi, which also finds its cultural home in this state. The connection is also instantly notable from the charro outfits worn by mariachi musicians, though theirs are a much more ornate and brightly colored version. For those wanting to see some of the finest demonstrations of charrería (and mariachi!), the International Mariachi and Charrería Festival takes place from August 26th to September 4th this year. However, charrería isn’t found only in Mexico; in the US, the states that once formed part of the Mexican Republic also practice this sport. These include Texas, New Mexico, California, and Arizona. 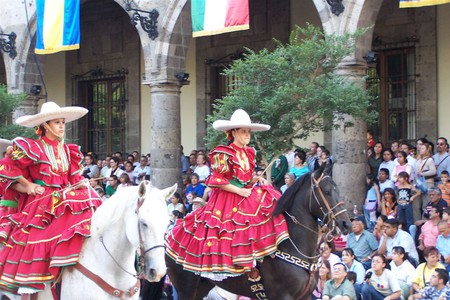 The popularity of charrería culture was heightened by the Mexican cinematic charro genre, which was popularized during the mid-20th century. Featuring stars such as Jorge Negrete and Pedro Infante, these films presented a vision of the charro which was typically masculine and overwhelmingly Mexican in character. This genre of film also reiterated the connection between charrería and mariachi and firmly embedded charrería in Mexican culture, positioning it as a great source of national pride.