The festival gastronómico, ‘El Saber del Sabor’, (‘the knowledge of flavor’) took place in the capital of Oaxaca state, Oaxaca City, from the 9th to the 13th of October 2015. It’s an annual festival that celebrates contemporary Mexican gastronomy. In addition to inviting chefs from across Mexico, the festival welcomes chefs from one Mexican guest city and one guest country. This year, the invitees were Guadalajara and Spain. 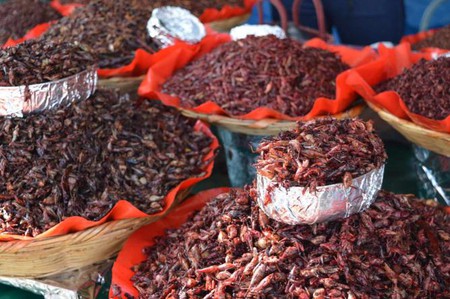 Chapulines at the market, a popular snack in Oaxaca I | © Maya Sankey-Black, 2015

Oaxaca’s rich culinary heritage makes it the perfect location for this food festival. This state is one of Mexico’s most important gastronomic centers and the cuisine is deeply rooted in its history. Oaxaca is comprised of eight regions – Cañada, Costa, Istmo de Tehauntepec, Mixteca, Papaloapan, Sierra Norte, Sierra Sur and Valles Centrales – each with their own distinctive yet intertwined culinary heritage. Like in the rest of Mexico, three core ingredients make up the basis of many dishes: corn, beans and chili peppers. However, there are many variations in ingredients and recipes due to the rich indigenous culture of the state and various microclimates.

Staples include mole, literally meaning ‘sauce’ in Nahuatl, an indigenous language, of which there exists seven Oaxacan varieties; chocolate, an Aztec favorite used in hot drinks (often flavored with chili and other spices) and to make mole negro; mezcal, a spirit made from agave, of which around 30 different varieties exist; quesillo, also known as queso oaxaqueño, a white stringy cheese; and chapulines, grasshoppers, toasted and covered in lime and sal de gusano (a salt mix with chili and dried, powdered maguey worms). You only have to wander around a market here to appreciate how central these ingredients are to Oaxacan cuisine. 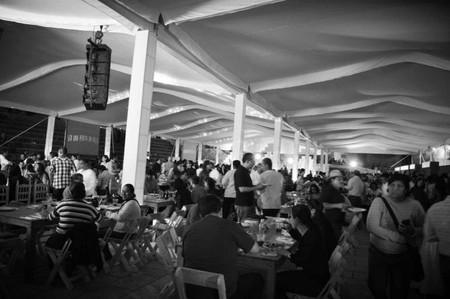 The festival kicked off with the Cena de Inauguración (opening dinner) in a large white marquee in the center of town. Rows of large tables upon which empty white plates lay at each place, waiting to be filled from the large stalls that lined one side of the room. Tickets cost 300 pesos ($18.25), and everything was included in the price. The theme of this dinner was regional diversity. Each of the stalls represented a different region in Oaxaca, bringing the rich variations in recipes and ingredients under one roof.

The selection included tlayudas, a dish particularly centered around Oaxaca City consisting of a large wheat flour tortilla, filled, folded and grilled on a barbecue. Fillings can include beans, meat, cheese and in this case was filled with quesillo and chapulines. There were many versions of tamales, a masa (corn dough) filled with anything from pork to zucchini flowers and steamed inside banana or corn leaves. They can also be made sweet or sordo (without filling – literally meaning ‘deaf’).

Other dishes included tacos, enchiladas, quesadillas, mole and poblano chili peppers, stuffed with quesillo and deep fried, and bowls of different salsas and guacamoles lined the fronts of tables to pour over your food. Waiters wandered around handing out glasses of wine, bottle of Bohemia beer and Los Dazantes mezcal. A live band played on the stage at the front of the hall. This dinner kicked off the festival in truly delicious style. Projected onto a screen were the words ‘El que sabe de sabor, sabe de amor,’ (he who knows flavor, knows love), emphasizing the key themes of this festival. On the one hand, there is knowledge, skill, tradition and technique, and on the other, pure inundated love for food. 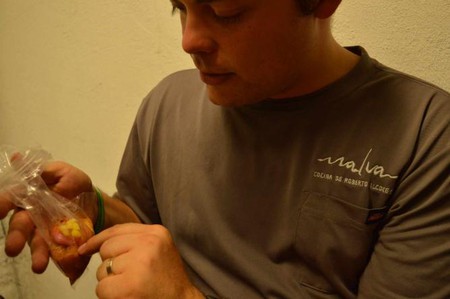 For the next four days, dinners took place across various restaurants around the city. Many of the events had themes, for example on Sunday night, a dinner took place entitled ‘Tertulia de Fermentos y Cocciones’, at Zicanda restaurant centered around the exploration of fermented foods and craft beers. One of the chefs attending was Roberto Alcocer, from the Malva restaurant in the Baja California region of Mexico. His dishes included various fermented aspects, drawing inspiration from childhood memories of Oaxaca and produce of his region. His playful take on the Oaxacan street food, ‘piedroza,’ where stale bread is soaked in pickling liquor, was topped with a shrimp and topped with pickled green mango. All served in a clear plastic bag, as it would be on the street.

Other events paid tribute to the guest country and guest city. Mezquite restaurant hosted a collaboration between chefs and mixologists from Barcelona and Oaxaca where guests were invited to taste a range of different cocktails and tapas dishes. Guadalajara’s event took place at the Belber Jiménez Museum and featured traditional dishes such as birria, a spicy goat stew, and torta ahogada, literally meaning ‘drowned sandwich’ as the pork sandwich is smothered in spicy, tomato salsa.

The final event of the festival was a brunch on Tuesday morning at Hotel Casa Oaxaca. Rafael Villalobos was the host chef and was joined by Carlos Gaytán from Michelin-starred restaurant Mexique in Chicago and Xavier Perez Stone from Axiote in Playa del Carmen. Perez Stone’s dishes celebrated the fresh seafood that his region has to offer. One of his dishes was a shrimp ceviche with fresh cubes of coconut. Gaytán’s take on the classic Mexican dish pozole, a spicy broth filled with pork and corn, fused with Japanese ingredients such as fish sauce, nori and ramen noodles was a completely original piece of cookery, bringing a fresh look to a well-known dish. Finally, Villalobos’ dishes which featured a spicy stew of chicharron (pork rind) and moronga (Mexican blood sausage), a delicious, comfort food dish. 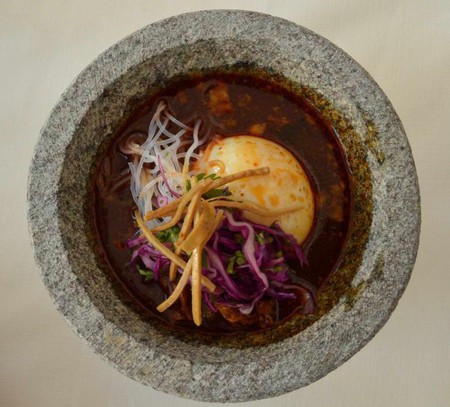 For five days, Oaxaca City was filled with chefs, food writers and food lovers who came together to celebrate gastronomy. The festival respected and paid tribute to history, tradition, produce and diversity, while also celebrating innovation, creativity and chefs who breathe fresh, modern perspective into time-honored classics. ‘El Saber del Sabor’ struck the perfect balance in translating the importance of both the past and the future. The chefs that took part pushed the boundaries of gastronomy while staying true to their heritage. Mexico is a country that is in love with its food, from the taco seller on the corner of a street to the Michelin-starred chef. It is a cuisine that never forgets its roots.