A Brief History of the Cineteca Nacional, Mexico City 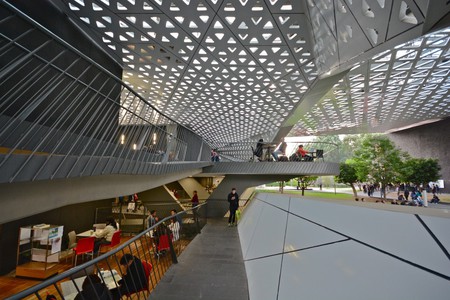 The interior of the Cineteca Nacional | © Alejandro/Flickr

Mexico City’s Cineteca Nacional is one of the city’s most popular tourist attractions, which is saying something for a city that has the most museums of any in the world. Now known for its screenings of alternative art house films, intriguing documentaries and its breathtaking architecture, here’s your brief history of this Mexico City landmark that brought cinephiles out of their private clubs and well and truly into the mainstream.

The Cineteca Nacional (in its original location) was first opened on January 17th 1974 and the inaugural screening was the pioneering Mexican director Fernando de Fuentes’ 1933 film El compadre Mendoza. With this film, the Cineteca’s two principal, overarching objectives were put into practice: preservation of Mexican film history and promotion of cinematography in the country. However, the Cineteca generated real buzz when Kubrick’s Clockwork Orange was screened there – this controversial picture alone brought in 153,000 viewers over its massive 153-day run. While the original edifice had just three rooms and vaults for the archives, it (along with an unknown quantity of rare archives and footage, as well as the vans of which were developed to take cinema to the rural masses) was sadly destroyed by a fire in 1982, which also resulted in a to-this-day-unknown number of deaths. 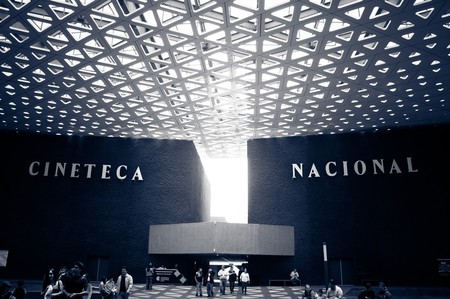 The Cineteca in black and white | © W & J/Flickr

The new Cineteca we know and continue to love today, located in the Colonia Xoco of Mexico City, was opened in early 1984. Over the years, this site has been repeatedly expanded from its initial four rooms to the ten (eleven, if you include the open-air screen) we are left with now. The development of more vaults came in 1992, and in 1996 the Cineteca was taken over by the Consejo Nacional para la Cultura y las Artes (better known as CONACULTA). A 2011 renovation necessitated that screenings be moved to various parts of Mexico City so as not to disrupt the schedule, but it was worth the hassle as this MXN$387,068,000 redevelopment brought with it newer vaults, a museum, gallery and stores to name but a few. In fact, the Cineteca’s Digital Restauration Laboratory is the only one of its kind in Latin America and some of the preserved film collections currently housed in the Cineteca include those of Miguel Alemán and Tomás Garrido Canabal, and the American Film Institute donated Mexican Revolution collections. In total, the Cineteca now holds more than 15,000 titles from around the world and 330,000 artifacts related to cinematic history. 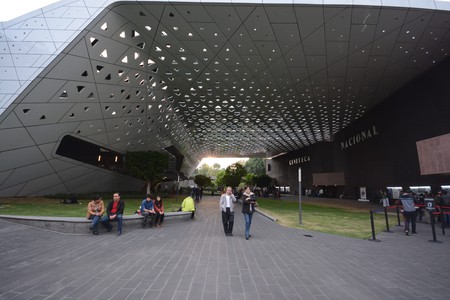 Dedicated primarily to the preservation, cataloguing, sharing and exhibiting of all things cinematic, we think it’s safe to say that the Cineteca has managed to do just that over its 40+ year run. It now puts on extremely well-curated exhibitions about cinema history and screens any number of both national and international indie flicks on a daily basis. It is and has long been most well-known for screening experimental and polemic movies; in fact, over the years, the Cineteca has screened controversial left-wing films, gay cinema, erotic flicks and hundreds of foreign films and documentaries which have allowed Mexicans to take a peek into the culture and politics of their immediate neighbors. 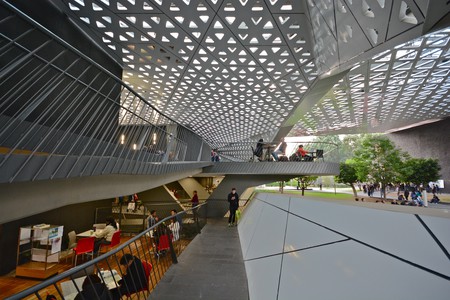 The interior of the Cineteca Nacional | © Alejandro/Flickr

Aside from the cinematic elements and its continuing status of the cinephile hub of Mexico City, the defining, stand-out feature of the Cineteca is undoubtedly its clean, sweeping architecture with an almost laser-cut looking geometric ‘roof’ and an overall futuristic appearance. The brains behind this iconic architecture belonged to Michel Rojkind, and the newly revamped Cineteca was most recently re-inaugurated on November 28, 2012. 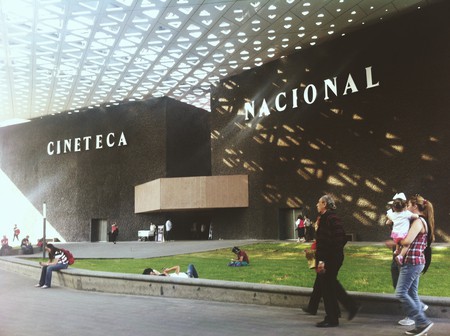