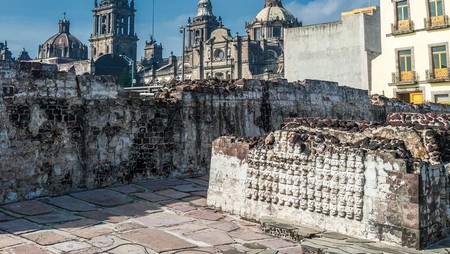 El Templo Mayor, originally called huei teocalli in Nahuatl, is located smack bang in what is now the center of modern day Mexico City. Widely considered one of the most important Aztec archaeological sites in the capital, it’s a tourist hot spot. If you’re planning to visit, here’s a brief history of El Templo Mayor.

Consider booking your trip with us – Culture Trip’s five-day Mexico City tour will allow you to experience the best this city has on offer. 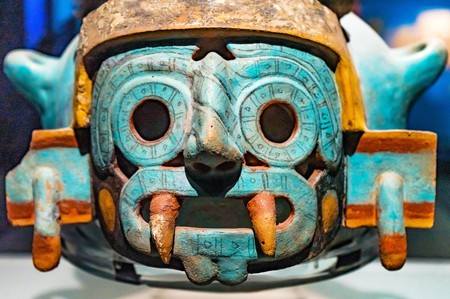 It was said the construction of the towering Templo Mayor represented the cosmological vision of the Aztecs and estimates suggest it was first built in the mid-14th century. However, it was rebuilt six times to mark the reigns of various Aztec emperors: the second temple was built when Acamapichtli, Huitzilihuitl and Chimalpopoca reigned (1375-1427); the third during the reign of Itzcoatl (1427-1440); the fourth to mark Axayacatl and Moctezuma I (it’s worth noting that most of the relics discovered date from this period); the fifth temple comes from the brief reign of Tizoc (1481-1486); the sixth dates from the period of Ahuizotl, who sacrificed thousands of victims at the inauguration of his update to this great temple; finally, the seventh iteration of the Templo Mayor, which coincided with the arrival of Hernán Cortés and the Spanish, was mainly destroyed. Aside from the central temple, archaeologists also uncovered the existence of several adjoining rooms. One was once the Palace of the Eagle Warriors, while another was dedicated to the Ocelot Warrior’s temple and a third paid homage to Quetzalcoatl.

This hugely important Aztec temple was dedicated to two different gods – Tlaloc, god of rain, and Huitzilopochtli, god of war. As a result, there are images of both Tlaloc and Huitzilopochtli dotted around the temple, most notably in separate shrines situated atop the pyramid. In fact, it’s even said that the Templo Mayor is situated on the spot where Huitzilopochtli gave the sign that the Mexican people had found their promised land; famous for gracing the Mexican flag, this sign supposedly was an eagle holding a snake in its mouth, perched atop a cactus. 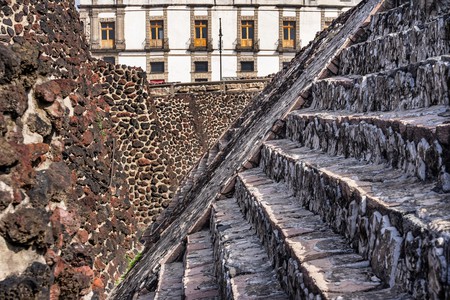 With the arrival of the Spanish in the 16th century, however, this temple was doomed. In 1521, the conquistadors began removing the stone, using it instead to construct their great Catholic masterpiece – the Metropolitan Cathedral. The colonization and reconstruction of the city at the hands of the Spanish led to the Templo Mayor mainly being forgotten. However, in the 20th century, archaeologists began to find nuggets that hinted to its location; Manuel Gamio found the temple’s southwest corner, Emilio Cuevas found a staircase in 1933, while 1948 saw Hugo Moedano and Elma Estrada Balmori’s discovery of serpent heads and offerings. This all but confirmed that the Templo Mayor was situated somewhere to the left of the looming cathedral, rather than beneath it as previously thought. However, it was in fact an electric company that struck gold, so to speak, with the 1978 discovery of an enormous monolith featuring a relief of Coyolxauhqui. This sparked five years of excavations – headed by archaeologist Eduardo Matos Moctezuma – which necessitated the destruction of 13 colonial buildings and ultimately left us with the Templo Mayor we see today. 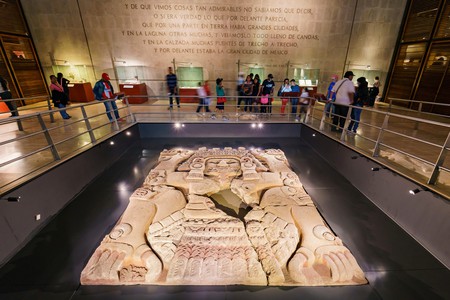 Currently formed of two separate sections, the pyramid itself and the adjoining museum, the site’s museum has eight rooms which display the numerous objects found when excavating the site, including Mixtec figurines, ceramics from Veracruz, rattles, skeletons, obsidian knives and decorative masks.