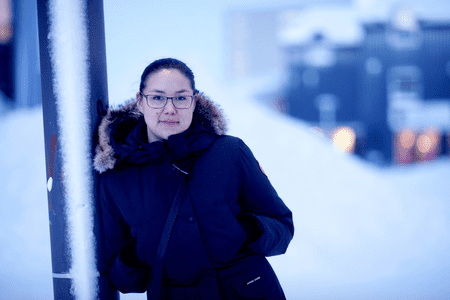 The country’s first major breakout literary star, whose short story “San Francisco” appears as part of our Global Anthology, talks about how Greenland is primed to grow its burgeoning literary scene.

In 2012, the Greenlandic literary house Milik Publishing, in partnership with other cultural institutions on the sparsely populated island nation, held a short story contest and published the selected submissions in an anthology. “San Francisco”, a short story by a female writer named Niviaq Korneliussen, wasn’t just a stand-out submission, it would be the first published words of a rising new star in international literature. Telling the story of a young, queer Greenlander who leaves her country on a spirited journey to San Francisco, the story is narrated with crackling liveliness, ending with an unlikely pop cameo by Pink in a tattoo parlor. “San Francisco”, published in English as part of our Global Anthology, so caught the attention of the editors at Milik that Korneliussen was approached for more work. According to a New Yorker profile of Korneliussen, her debut novel HOMO sapienne, written over the course of a month, has become a literary sensation in her homeland, as well as its sovereign state, the Kingdom of Denmark. Translation rights to HOMO sapienne have sold in a number of languages, including English.

We spoke to Korneliussen about how she came to write “San Francisco” and HOMO sapienne; the literary landscape of country; and Greenland’s progressive acceptance of queer culture.

There is a word in Greenlandic “qivittoq” which was described to me as a sort of exile or wanderer. In your first short story “San Francisco”, the narrator is in a similar self-imposed exile resulting from a heartbreak. Were you thinking of the themes of exile and longing when you wrote “San Francisco?”
A “qivittoq” is a person that has left society for good. Hundreds of years ago individuals would leave their small societies and go live in nature in absolute solitude if they were sad/no longer needed in the society/if they’d become a burden/if they had lost their love to another/if they were excluded from the society. In terms of modern society, these are people who kill themselves.

The narrator in San Francisco literally escapes from home, because she doesn’t feel like she’s welcome in her home country. There’s no other place she’d rather live but Greenland, but because of the bullying and humiliation of her sexual orientation, it becomes a necessity to leave everyone behind when the love of her life dies. She travels to San Francisco because she can’t stand living in a place where everything reminds her of her girlfriend. She can’t be in a place where some people can’t accept who she is. She tries to handle her grief, but it doesn’t really help escaping, because she figures out in the end that no matter what she does, she can’t change the fact that her girlfriend is gone.

I’ve always been very interested in the theme “home,” and you can see already in my first published short story that the narrator is struggling to find a feeling of what “home” means. 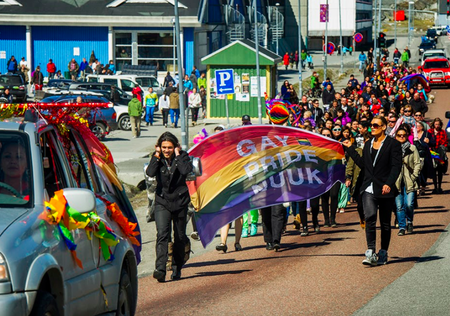 The narrator romanticizes San Francisco as a kind of promised land, much different than Nuuk, where the narrator and her girlfriend are stand-outs. As a queer Greenlander, what was San Francisco in your mind growing up? And since writing the story, has it become easier to be gay in Greenland?
I never knew that San Francisco was a gay town until I went to live as an exchange student in Sacramento in 2007. My host family took me there a couple of times during my stay. I was absolutely amazed by the city when I visited it for the first time. It was everything I’ve ever dreamed of—a beautiful city by the sea where a lot of different cultures met. Diversity was visible on every corner. Nice and cosy bookstores were all around. It was very different from the other cities I saw in California. I fell in love with it right away. After I got back to Greenland, I always dreamed of returning to San Francisco. I missed that you could be anonymous but still be apart of a group of some kind, a subculture. San Francisco is for me the city to escape to if you need a break from the world.

Greenland adapts to new circumstances very quickly. In our capital, Nuuk, I have never experienced hate crimes or harassment because of my sexual orientation. People are in general very open to diversity. I am sure that it is a bit harder being queer in the smaller cities and villages, like it is in every country. But the media and the access to the rest of the world have made the new generation extremely open to all kinds of people, and even though the older generation may still have some prejudices, most of the younger generations are willing to change that so everyone is accepted in every society. We have the same rights as everyone else—we can get married at the church, we can adopt, etc. Gay pride parades have been held for a couple of years and are very popular. Unlike 10–15 years ago, most queer people don’t feel different from the rest of society, because they aren’t being excluded from it. 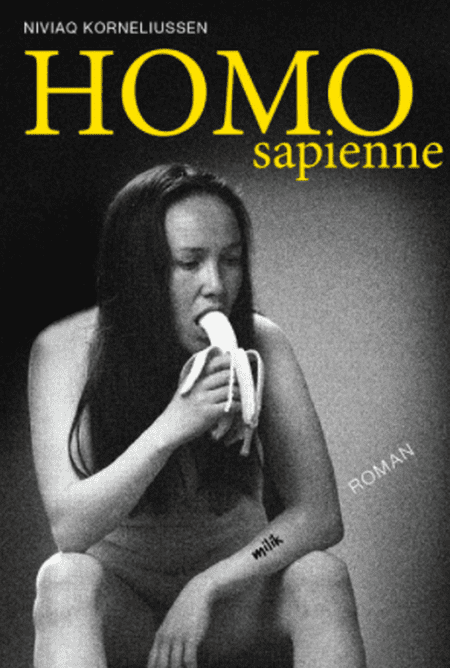 The English translation of your novel HOMO sapienne is due out with an American publisher in the near future. It carries over a lot of themes and characters in “San Francisco” (including Pink, who makes a cameo). What inspired you to expand that story into a novel?
I didn’t plan on writing about queer people in my novel, but I didn’t really feel like it was my book, when I tried to tell a story about two heterosexuals falling in love. It was important to me to tell the story of the untold. Gay literature is not really available in Greenland, so when I decided to use homosexuality as one of my themes in my novel, I decided to tell the story of the same characters in “San Francisco,” and write about how they fell in love. When I wrote “San Francisco” I felt like I wasn’t done writing about their lives. I was very attached to the characters, because they were my very first, and it was difficult to say goodbye to them.

Then I got the chance to write about them again in my novel, just about a year later after I wrote “San Francisco”, and I took the opportunity to say a proper farewell to my very first characters. These characters (modern, universal, young Greenlanders) weren’t that visible in Greenlandic literature, and it was and still is important to me to tell their stories so the awareness of a modern Greenland is spread in the Nordic countries.

You were recently profiled by the New Yorker where it was noted that not only were you a new voice in Greenlandic literature, but one of the very few to be read outside of your country. Could you talk a bit about the Greenlandic literary scene and if you think there is hope for greater interest in its writers?
The first novel in Greenlandic was published just a little bit over a 100 years ago; written literature had never been a tradition before that. Our tradition was mainly oral storytelling, so people just haven’t been that interested in literature as much as they were in music, for example. We have had a lot of authors from the older generations since the first book, and even though a lot of them are interesting, they don’t speak to the modern generations as much as books from other countries do, because Greenlandic literature is mostly about nature, our old hunting culture, remembrance novels from the 70s etc.

But the past couple of years the biggest (relatively speaking) publishing house in Greenland, Milik Publishing, has started a short story competition for young Greenlandic writers, and that has been a great kick-starter for them to publish new books that can be read by the rest of the world, especially the Nordic countries. We don’t have a writer’s school, we barely have readings, there are no professional literary reviewers in the media, we don’t have literary festivals, we don’t really have experience in promoting abroad, so we still have a long way to establish a vibrant literary scene.

Fortunately a few of these younger Greenlandic writers, myself included, have been traveling to the Nordic countries to promote our country’s literature, and that is a great opportunity to find some inspiration to develop the literary scene back home. When that happens more people will be inspired to write, and more of their books will be published, which will lead to better written books that the rest of the world will want to read. I am absolutely sure that even though we are very few in Greenland, a lot of people have the potential to become very good writers, and have a lot to offer to universal readers.

It’s been three years since HOMO sapiennes was first published, so perhaps you could say a bit about how your life has changed since the novel was published, and about what new work you are currently writing?
Right before HOMO sapiennes was published, I studied psychology in Aarhus, Denmark. I never thought I’d be able to work only as a writer, and when I got very busy with my book, I decided to focus on that, so I dropped out of school and began traveling. I’ve been working on many cultural projects. I’ve been traveling very much in the Nordic countries and have participated in many festivals and readings and conferences. I’ve worked with the National Theater of Greenland; I’ve done an art exhibition with an artist about the Greenlandic language, I’ve written columns and short stories for newspapers and radio, I’ve held workshops for young writers etc.

It’s been very interesting to work with cultural ambassadors from all over. I feel extremely lucky to be able to work doing what I love. Currently I’m working on a theater performance about Greenlandic men, and I’m also writing my next novel which is about a troubled woman who is trying desperately to find a feeling of being “home.”
Read Niviaq Korneliussen’s short story “San Francisco” from our Global Anthology here.