A Walk Around Montreal in 15 Perfect Instagrams 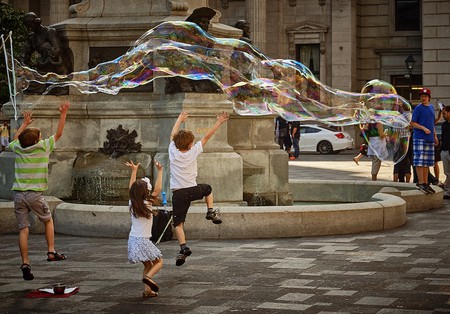 The city of Montreal is full of unexpected moments that capture the creativity and diversity of the people who call it home. Here’s a quick visual tour of the ongoing festivals, unique neighborhoods, and distinctive architecture found throughout the city.

In 2017, Montreal is celebrating its 375th city anniversary along with Canada’s 150th year since Confederation. The decorations, festivities, and weekly displays of fireworks keep coming, adding further color and vivacity to a city that is already full of life during the warmer months. The Old Port is the city’s most popular tourist spot, known for its historic architecture and monuments.

Festivals characterize the summer in Montreal, to the extent that it can feel as though there’s a new festival on every week—showcasing local and international talent from music and art, athletics, and more. There’s a good chance you’ll stumble across a street party or jam session—not to mention world-famous celebrations such as the Montreal International Jazz Festival and Osheaga—simply by wandering through the downtown area and surrounding neighborhoods.

The city’s architecture is unique in North America, combining the legacies of both French and British colonialism with industrial history and modern high-rises. Each of Montreal’s neighborhoods has its own distinct housing and storefront style, making it a visually fascinating city to wander through and take photographs.

Another feature of the urban landscape in Montreal is the impressive religious architecture. Although the city has a conflicted history with the Catholic Church, the latter’s influence is apparent throughout its numerous churches, cathedrals, and monuments constructed over the decades.

Had fun shooting tonight. What a beauty this one 😌 #montreal #mtlshot #mtl #mtlblog

Markets are another place where tourists and locals congregate in Montreal, especially on weekends. Here you can find a range of local produce and products, meals, flowers, and fresh food on resplendent display. Popular markets include Atwater, Maisonneuve in Hochelaga, and Jean-Talon, which is the largest and oldest in the city.

Marché Maisonneuve, in particular, is an enjoyable place to visit, buy picnic foods and settle nearby for a few hours in the afternoon sun.

If you head up Mont-Royal, the “mountain” that gives the city its name, you’ll find a natural refuge from the downtown bustle while still being able to look out over the cityscape—and the waters of the St. Lawrence River beyond—from a few different vantage points. If you want to get a sense of the spread of the city, heading into Mont-Royal Park with a camera is always a worthwhile activity.

Visitors can capture other beautiful panoramas at the edges of the island that Montreal inhabits, which mostly consist of parks that overlook the river. Lachine Canal, for example, is a popular spot for cyclists and pedestrians alike to explore and relax at when the weather is sunny and warm.

I was struggling to run 5km last week and for whatever sane reason, I decided to run 11.5km today. Starting the week on the right foot (quite literally). Here's a personal reminder to setting and celebrating personal goals.