The Top 12 Things to Do and See in Victoria, British Columbia

The Top 12 Things to Do and See in Victoria, British Columbia

Victoria, located on Vancouver Island, is the capital of British Columbia. It’s a great place to visit for the day, a weekend, or a longer getaway. There’s plenty to keep everyone busy—from award-winning gardens and museums to the best fish and chips you will ever eat. Keep reading to discover the 12 best things to do and see in British Columbia’s capital.

Over one million people visit the world-famous Butchart Gardens annually. The National Historic Site of Canada is home to five main gardens: the Rose, Japanese, Italian, Mediterranean, and Sunken Gardens. The latter was the first project that the Butcharts developed many years ago, as it was previously a quarry. One of the best things about Butchart Gardens is that it looks impressive in every season, even in winter when they decorate with thousands of twinkling lights.

Many of Canada’s Fairmont properties are considered to be Canadian castles. The luxurious Fairmont Empress in Victoria is one of them. Condé Nast designated it a Gold List hotel, while Travel + Leisure named it a top Canadian hotel. Fairmont Empress also recently underwent a $60 million restoration, so internally, it looks more impressive than ever. Tea at the Empress is an afternoon tea that has been enjoyed by visiting royals and celebrities too. It’s a must-do when in Victoria, with delicious treats and over 21 loose leaf teas available.

Miniature World calls itself “The Greatest Little Show on Earth.” Inside the Victoria tourist attraction, guests will find the world’s smallest operational sawmill, as well as one of the world’s largest model railways, and two of the world’s largest dollhouses, built in the 1880s. Miniature World is also home to the Wonderful World of the Circus, the Enchanted Valley of Castles, Fantasy Land, and so much more. It’s a perfect place for the whole family to spend an afternoon.

Victoria’s Inner Harbour has to be one of the world’s most beautiful harbors. Found in the middle of the city, it is where the Fairmont Empress, the Royal BC Museum, and the BC Parliament Building (home to BC’s Legislative Assembly) lie. A stroll along the water to see these architecturally pleasing buildings, and to watch the seaplanes take off and land, is a must-do. It looks just as good during the day as it does at night, and festivals and performances take place regularly in the Inner Harbour during the warmer months.

One thing you have to eat in Victoria is fish and chips from Red Fish Blue Fish. The local business sits in an upcycled shipping container on a wooden pier in Victoria’s Inner Harbour. Red Fish Blue Fish only serves sustainable Ocean Wise seafood too. Their menu includes the classic fish and chips, as well as seafood chowder, jerk fish poutine, sandwiches, fried oysters, and tacones. Although their wait times can be long, the meal at the end is definitely worth the wait.

Victoria has many impressive stately buildings, including Hatley Castle at Hatley Park National Historic Site. The prestigious property was a home, a military college, and is now a museum, located on the Royal Roads University campus. Hatley Castle, built in the Scottish-Baronial style, has beautifully manicured gardens surrounding it. Today, it is also featured in many TV shows and films, such as Smallville and the X-Men series.

Beacon Hill Park lies within walking distance of downtown Victoria. The 200-acre (75-hectare) property is home to trails, two playgrounds for the kids, a Mile 0 sign (signifying the start of the Trans-Canada Highway), sports fields and courts, a petting zoo, and manicured gardens. Beacon Hill Park has impressive views of Juan de Fuca Strait and Washington State’s Olympic Mountains too. Within the park, check out the world’s fourth tallest totem pole and the bridge between Goodacre and Fountain Lakes, which is dedicated to famous BC artist, Emily Carr.

For the shoppers visiting Victoria, be sure to check out Lower Johnson Street in the city center. Known colloquially as LoJo, the street’s colorful Victorian buildings house some of the city’s best independent boutiques, retailers, and restaurants. For food, visit the following popular places: Il Terrazzo, Famoso Neapolitan Pizzeria, and Willy’s Cafe and Bakery. Favorite shops include Lore General Store for gifts and homewares and Still Life for Her. Don’t leave without wandering through Market Square as well. 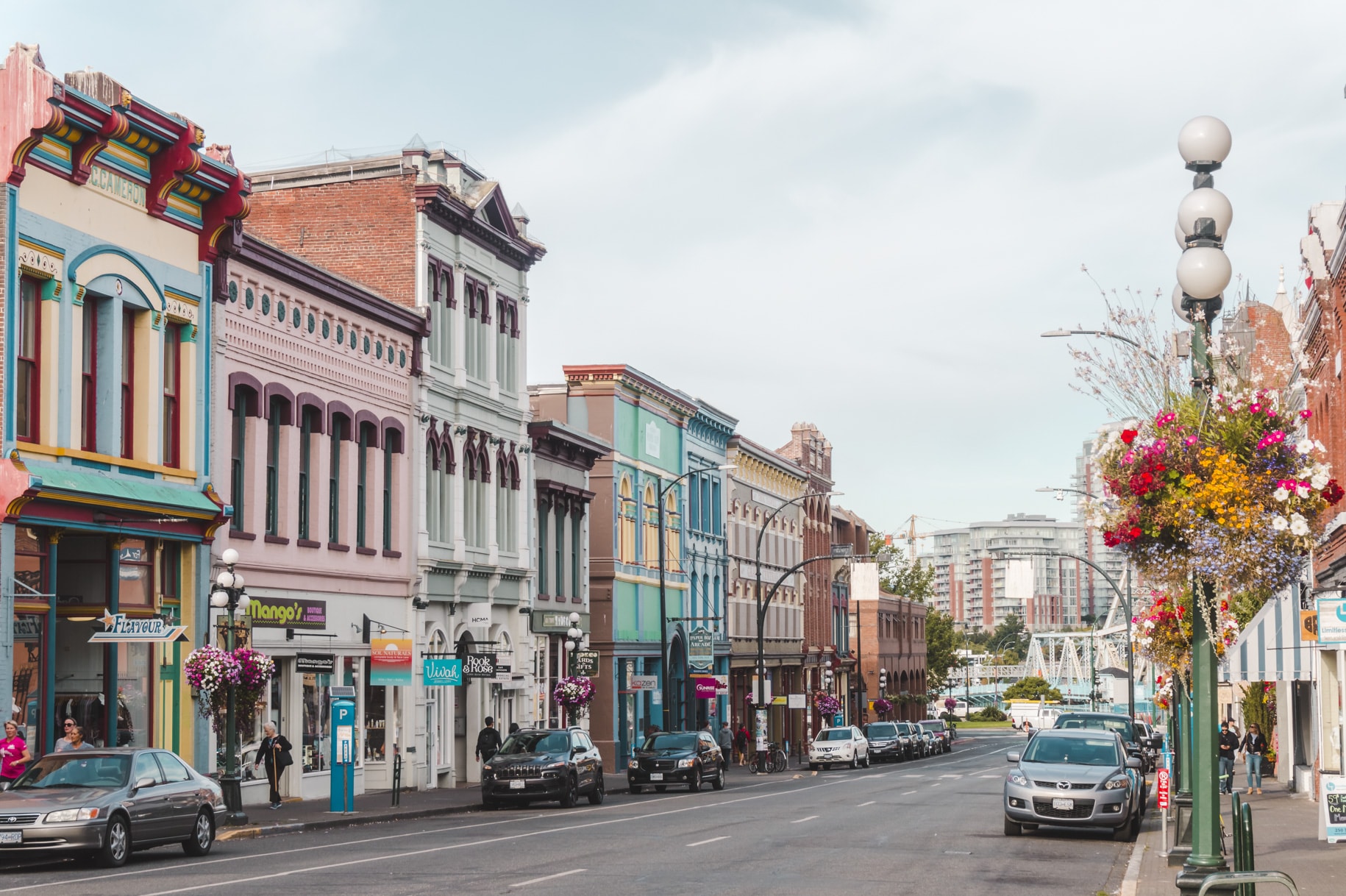 Yes, Victoria has a Fisherman’s Wharf, just like San Francisco. But Victoria’s counterpart is a little bit different. Located around the corner from Inner Harbour, Fisherman’s Wharf is home to many people and their floating homes. Walk around the marina and admire the colorful properties, before visiting one of the many restaurants. Tasty treats include fish and chips, Mexican food, ice cream, and more.

Victoria’s Chinatown is the oldest in Canada, the second oldest in North America, and a National Historic Site. The main area to visit is the 500–600 block of Fisgard Street, which is where its impressive gate, The Gate of Harmonious Interest, stands. There are many historic buildings on this block, as well as Chinese businesses, independent cafés, and Fan Tan Alley, which is well known for being one of the narrowest alleys in North America.

Known as one of Canada’s most haunted places, Craigdarroch Castle, built between 1887 and 1890, is a National Historic Site classified as a Victorian “bonanza castle.” Today, people can visit and take a walk back in time to see how the upper class would have lived in the 1890s. Craigdarroch Castle sits on a hill overlooking the city and has a total of 39 rooms over four floors.