The History Of Toronto's Union Station In 1 Minute 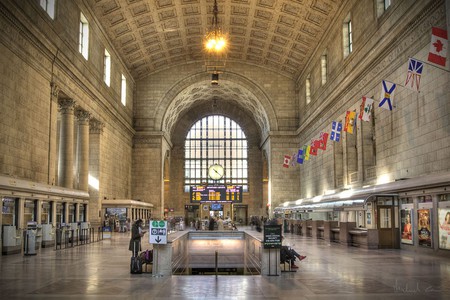 The Great Hall of Union Station in Toronto | © Michael Caven/WikiCommons

Toronto’s Union Station has been the major portal for locomotive transportation since the mid-19th century. The first structure, which sat on Front Street just west of the current station, can be traced back to 1855 when the Grand Trunk Railway opened the wooden building with the help of the Northern Railway and the Great Western Railway. In 1872, the station was replaced with a newer building designed by the Chief Engineer of the Grand Trunk Railway, E. P. Hannaford – modeled after the Illinois Central Station in Chicago, the building featured three dome-shaped towers, one of which included a clock. During an era when train stations were seen as a ‘gateway to a city’, the Old Union Station stood out as one of the most modern and beautifully designed stations of its time.

With most of the buildings along Front Street burnt to the ground after the Great Fire of 1904, and 130 trains passing through the station every day carrying over 40 thousand people in and out of the city, a larger station was needed. The Canadian Pacific Railway (CPR) and Grand Truck Railway met with the City of Toronto to discuss plans for a new station, which included the demolition of the Old Station. The rubble-filled land next to the Old Station was leased from the City of Toronto in 1905; however, construction didn’t begin until 1914. Further delays ensued with WWI and the collapse of the Grand Truck Railway in 1919 – the station was finally completed in 1921; however, the Old Station continued to operate during this time due to legal issues and extra work that still needed to be completed.

The building, designed by a group of architects, was built in the Parisian Beaux-Arts style that features a Great Hall with a vaulted ceiling and Gustavino tiles, vaulted windows, stone walls, herringbone marble floors and a limestone exterior with limestone columns – the new station was considered the largest and most lavish stations of its time. The architects even included the names of the railway cities carved along the walls of the interior. 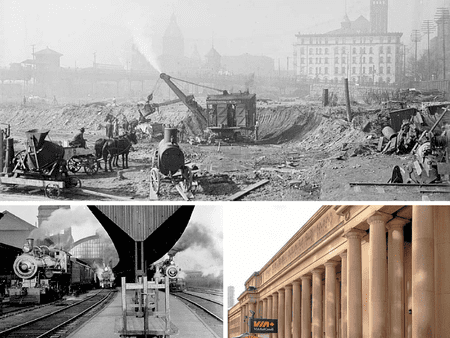 The new Union Station officially opened on August 6, 1927 – Edward, the Prince of Wales, stood in front of a large crowd as he cut the ribbon to the new station, although other significant government officials were also present on this day, including the Duke and Duchess of York, the British Prime Minister and his wife, the Canadian Prime Minister William Lyon Mackenzie King, the Lieutenant Governor, and the Ontario Premier. Upon cutting the ribbon, the Prince of Wales purchased the first ticket and was presented with a gold key that unlocked the station. On August 11th, the station saw its first round of passenger trains. Demolition of the Old Station began in 1927, and it was completely removed by 1931.

Since its opening, Union Station has been an epicentre for transportation and is one of the most significant hubs in Canada. It now plays host as the terminal for other rail services like the GO train, the Via Rail and the Toronto subway system, and many historical events have taken place on the grounds upon which the station stands – from World War II goodbyes and reunions to immigrants coming to Canada for their very first time. Union Station was designated as a National Historic Site of Canada in 1975, a Heritage Railway Station (1989), and today, serves over 250,000 passengers per day.