The Best Sports Clubs You Can Join in Toronto

Game night with the Extreme Toronto Sports Club | Courtesy of XTSC
The best sports clubs in Toronto offer more than just a place to sweat it out—they offer a sense of community, well-being, and athletic fun for their dedicated members. Each club has its own atmosphere, so it’s important to find a good fit. Here is a sample of some of Toronto’s most popular sports clubs, offering a variety of teams, leagues, and membership options.

Located north of downtown, the Toronto SSC offers team or individual registration options for most of their athletic programs. Anyone over the age of 19 is free to play, with the majority of members being in their 20s and 30s. They provide both single-sex and co-ed, recreational and more advanced programs. There’s no annual membership at the SCC—you only pay for the games in which you participate.

In North York, the Extreme Toronto Sports Club (XTSC) opened in 2004 through the initiative of a group of sports enthusiasts with a mission to focus on putting the fun and excitement back into the Toronto sports scene. Open to men and women in teams or individually, XTSC offers year-round programs that include both indoor and outdoor soccer (turf soccer, grass soccer, and gymnasium soccer), court volleyball (fall, winter, and spring), and Ultimate, a game played with a flying disc. 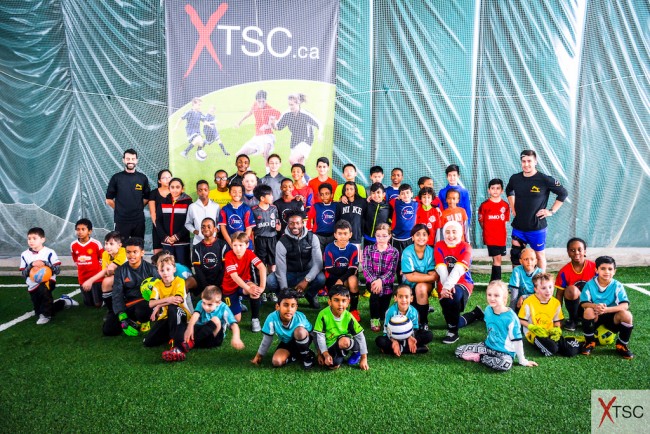 Currently undergoing a move from their original location northward to the Stockyards on Weston Road in the West End, Just 4 Fun takes a light-hearted and friendly approach to single sex and co-ed leagues and scheduled drop-in games of soccer, volleyball, ball hockey, futsal, basketball, and more.

OutSport Toronto, founded in 2011, is a not-for-profit umbrella organization with over 20 member groups across the city that cater to Toronto’s LGBT amateur sport and recreation communities. Focusing on creating safe and welcoming spaces where everyone can get out to play, OutSport’s mission includes the encouragement of healthy living, wellness, and well-being.

Fitness Studio, Gym, Yoga Studio
Toronto Athletic Club | Courtesy of Cambridge Group of Clubs
In the heart of downtown Toronto, the Toronto Athletic Club dubs itself “the club in the sky.” With incredible views of the city skyline through the floor-to-ceiling windows, the club has a large gym, a swimming pool, and a sports medicine clinic. Squash is a primary sport at this club, with an extensive schedule of events and competitions.
More Info
Open In Google Maps
79 Wellington Street West, Old Toronto Toronto, Ontario, M5K 1J5, Canada
+14168650903
Visit website

Scenically located on Lake Shore Blvd West, overlooking Lake Ontario, The Boulevard Club is one of the most exclusive private multi-sport and social clubs in the city. Athletic programs include badminton, dragon boating, fitness, karate, lawn bowling and croquet, tennis, and yachting. In operation since 1905, the club also hosts weddings and other celebrations on their picturesque grounds.