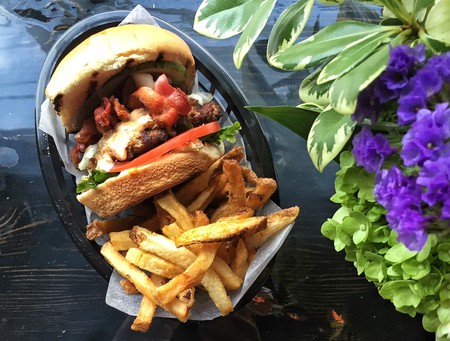 Image courtesy of The Burnt Tongue, Photograph by Chanry Thach

The Hamilton restaurant scene is gaining a higher profile and the buzz is spreading across the country. The current crop of gourmet offerings is unprecedented, leaving burger fans with a true plethora of choices. We’ve waded through the competition to bring you ten of the best burgers in Hamilton.

Staxx is a busy downtown favourite and a classic example of what works on the Hamilton restaurant scene, the basics done well in a dressed down atmosphere. The portions are hefty and the menu features some basic variations on the beef burger theme, including the cholesterol enhancing bacon and egg burger. The burgers are handmade and grilled to well done on the outside and still juicy on the inside. Burgers are actually a sideline for this casual eatery that has gained reputation among fans of traditional fried chicken and waffles. The selection also includes decent vegan burger options, including black bean and Portobello mushroom versions. 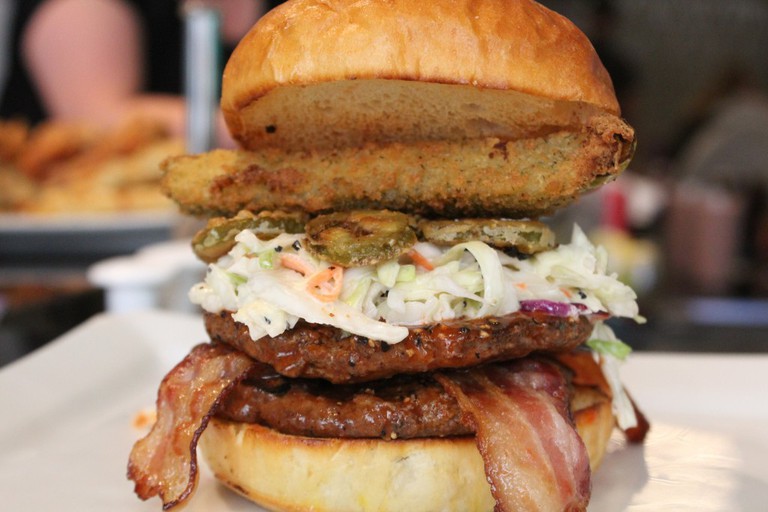 The George Hamilton sits on the corner of Bay and King Streets, and is the ‘Oldest Public House’ in town. It’s not what you’d call a super stylish or trendy spot, embracing its classic pub roots, but it is growing in popularity due to a reputation for the quality traditional tavern dishes on the menu, including house made burgers. Unpretentious, perfectly cooked to order and well presented, house specialities include Carolina Sticky sauce, a tangy-sweet barbecue style confection, on the appropriately named Carolina Sticky Burger, embellished with a choice of onions or mushrooms. It’s a typical example of the classic simplicity of the menu. In addition to the landmark downtown location, there’s a newer George Hamilton on the corner of Upper Ottawa and Fennell Avenue to add a much needed entry to the Mountain’s gourmet burger offerings. Bonus: the kitchen’s open until midnight Thursday to Saturday for your late night burger needs.

Occupying a picturesque Victorian brownstone in an older part of town, The Ship offers hip downtown Hamilton ambience and an imaginative selection of gourmet burgers, including daily specials. Among the consistent favourites are The Hawaiian, a concoction that surprises the taste buds with the sweetness of grilled pineapple along with bacon, cheddar, and ranch dressing. Nana Shelly’s Strawberry Rhubarb burger, with its combination of strawberry rhubarb compote, double cream brie and bacon, is another imaginative entry on the menu. The patties are house made and there are both vegan and gluten free alternatives. The addition of fresh cut fries is a bonus, as is a drink menu with equally imaginative offerings. Note: they don’t accept reservations. 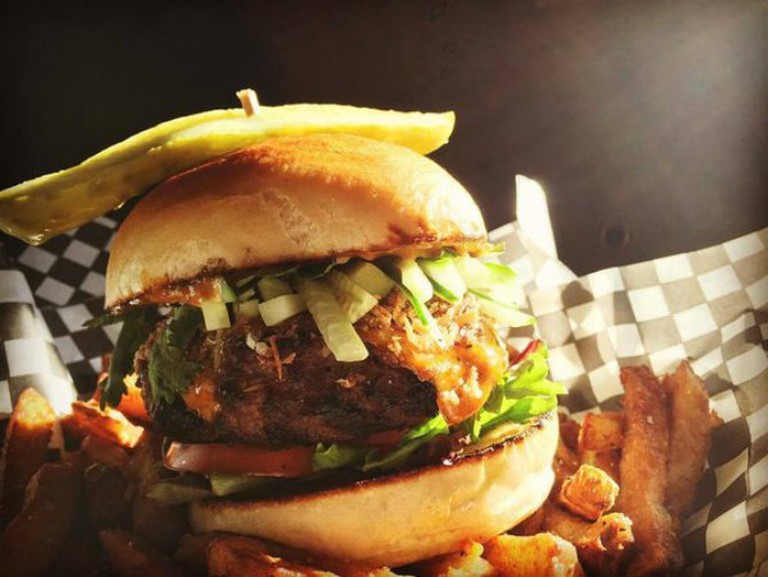 Image courtesy of The Ship

Cute, cozy Jack & Lois brings the traditional breakfast, burger and beer formula to the trendy James Street North scene. House made burgers are served on a pile of homemade fries (extra) on film canisters lined with red and white checked paper. With a tiny floor space, reservations are advised, unless you don’t mind the wait. The serving sizes are generous, and the toppings and condiments are crispy fresh. The menu offers four gourmet burger options made from black Angus beef, from a classic cheeseburger to the fragrant Italian inspired Soprano burger.

The burgers come as a bit of surprise in this small, unpretentious place on Cannon just shy of James Street North (with a newer, second location on hip Locke Street South). Run by an energetic young crew, The Burnt Tongue bills itself as a ‘soup restaurant,’ with a menu heavy on the aforementioned homemade soups, sandwiches, and salads. The burgers, however, are exceptional, if fairly simple in design. A burger with a handmade patty of fresh beef starts at a mere $4 for a single, $6 for a double, both with fresh toppings. Daily specials may also include other burger offerings and fixings. It’s undoubtedly the high quality and gourmet flavour at this price point that makes The Burnt Tongue one of the city’s favourite casual restaurants.

Image courtesy of The Burnt Tongue, Photograph by Chanry Thach

The burgers are tasty and the portions human sized, rather than super-sized, at The Works Gourmet Burger Bistro, which has become popular among the downtown set. The Jackson Square location offers a convenient burger stop when you’re in the vicinity and is especially busy at lunch time. You can craft your own burger and The Works’ hook is offering a range of nine options when it comes to the patty, from Canadian beef to crispy chicken, cheese stuffed beef, or even lean domestic elk patty. There are good veggie choices, too, including a Portobello mushroom cap. The burgers are hand pressed daily and flame grilled to order, with a la carte options not for the faint of heart, or hardened of arteries.

Locally sourced ingredients that include fresh beef and produce delivered daily ensure the quality of offerings at Hambrgr Burgers and Beer, the latest downtown burger joint to hit the Hamilton scene. The menu offers several beef burger options, including traditional favourites revamped with gourmet flair and imagination, like the Black & Blue with grilled onions, whiskey catsup, blue ermite cheese, and iceberg lettuce, or the Magic Mushroom with beer braised cremini, oyster and shiitake mushrooms along with Swiss cheese, basil pesto and aioli. You can also concoct your own burger. A chic location on King William Street near James and a stellar selection of craft beers and bourbons add to the trendy ambience. 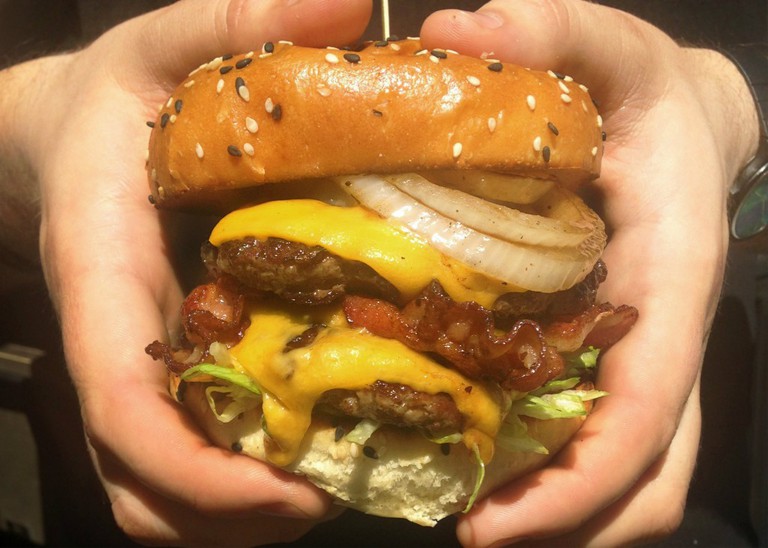 Delirious Burger Co. is heaven for the burger purist, located in the heart of old Westdale. The burgers are hand crafted American-style, cooked on a flat top grill rather than over a flame. A cheeseburger features good old fashioned sliced, processed American cheese and the buns are classic rather than artisan. It’s a recipe that lets the focus rest solely on the burger patty itself, and that’s where the Delirious recipe shines. Burgers are consistently juicy and perfectly cooked. The portions are extravagant and make this place über popular with the student crowd. The stuffed Portobello mushroom burger is a house speciality and an enormous, messy, and delicious variation on the burger theme, one of a few veggie options on the menu. All their meat and produce are locally sourced.

In a small location on Dundas Street in Waterdown, the Real Burger Company ends up anything but a cliché. There’s nothing fancy on the menu, and the stripped down décor has an unpretentious vibe, but the burgers themselves are flavourful and juicy and grilled to pink perfection. There’s limited seating, so you may want to consider take out. It’s the homemade quality that keeps the customers coming back, including handcrafted poutine and other classic diner options, along with the burgers on the menu. The ambitious owners have another location in Niagara Falls, with plans to franchise the Real Burger Company’s winning combination across the country. 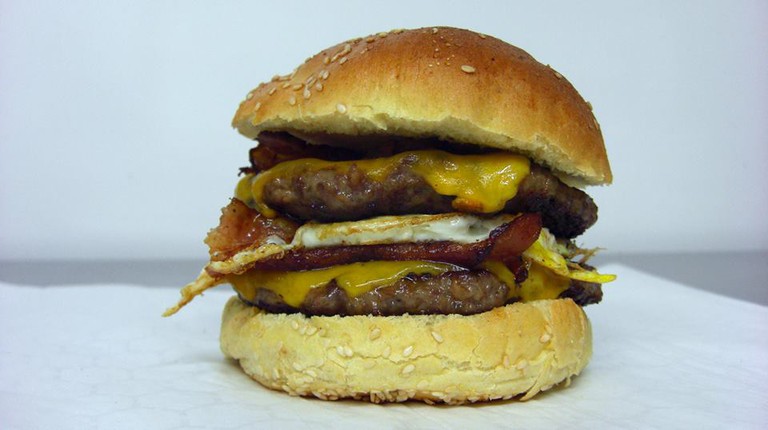 In the wilds of Winona, or Stoney Creek if you prefer, out on Hamilton’s southern edges, you will find the Memphis Fire Barbeque Company. True to its name, fire barbecued items are prominent on the menu and the house speciality is actually huge portions of tender ribs. The burgers, however, are house made and offer good value and genuine fire grilled flavour. The burger selection is straightforward, featuring classic options that include high end cheeses and other fresh toppings. The quality and taste difference comes from using only freshly ground beef from local farms that is 100% natural, hormone and steroid free. Other menu favourites include Texas-style brisket and pulled pork.