1,500 People Singing 'Hallelujah' Is The Perfect Tribute To Leonard Cohen 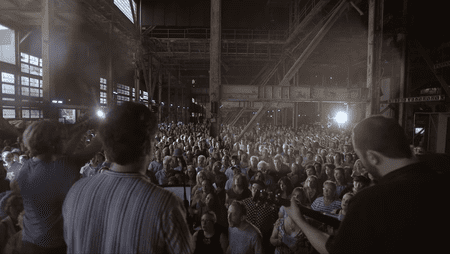 On the evening of Nov. 10, the illustrious Canadian singer, songwriter, poet, novelist, and painter Leonard Cohen died at the age of 82. What better way to honor Cohen’s career than by listening to “Hallelujah.”

Cohen’s death was confirmed by his record label, Sony Music, but no further details were revealed in regards to the cause of death. However, Adam Cohen, his son and producer, said: “My father passed away peacefully at his home in Los Angeles with the knowledge that he had completed what he felt was one of his greatest records. He was writing up until his last moments with his unique brand of humor.”

Throughout his nearly five-decade-long career in music, Cohen explored a seemingly unlimited range of topics that included religion, politics, isolation, sexuality, and personal relationships, always dazzling listeners with his intellectual observations. Releasing his fourteenth and final album, You Want It Darker, on Oct. 21, Pitchfork described the album as “a pristine, piously crafted last testament, the informed conclusion of a lifetime of inquiry.” In a comprehensive New Yorker profile published a few days before the album’s release, Cohen essentially predicted his imminent passing.

“I don’t think I’ll be able to finish those songs,” Cohen said after reciting the lyrics to an unfinished track. “Maybe, who knows? And maybe I’ll get a second wind, I don’t know. But I don’t dare attach myself to a spiritual strategy. I don’t dare do that. I’ve got some work to do. Take care of business. I am ready to die. I hope it’s not too uncomfortable. That’s about it for me.”

Of his massive, stellar catalogue, none stand as high — in fame and beauty — as “Hallelujah.” Back in June of 2016, on the last day of the month, fellow Canadian singer-songwriter Rufus Wainwright and 1500 singers came together at the Hearn Generating Station in Toronto during the Luminato Festival to sing this dazzling track. As you take the next few days to revisit the colossal career of Cohen, make sure to include this breathtaking (aren’t they all?) rendition of “Hallelujah.” A quick warning: Don’t click play unless a box of tissues is within arm’s reach.