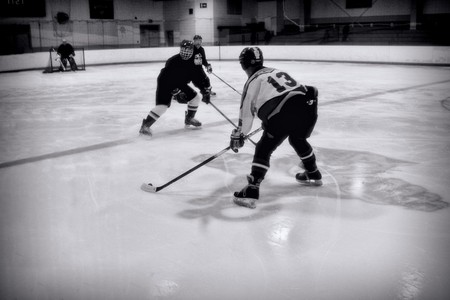 While lacrosse is Canada’s national summer sport, Canadians swap their crosses for sticks and take to the rinks in the winter months to play the resoundingly Canadian sport of ice hockey. 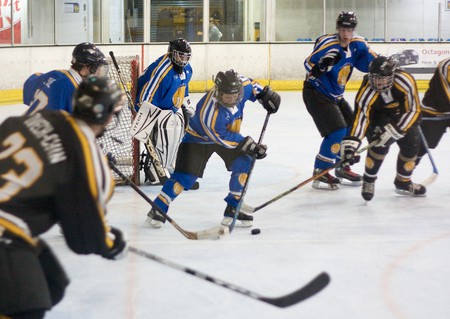 Until the mid-1980s, it was generally accepted that ice hockey derived from English field hockey and Native American lacrosse. Then research found mention of a hockey-like game that was played in early 1800s-Nova Scotia by the Mi’kmaq (Micmac) tribe. This game appears to have stemmed from the Irish game of hurling and was likely spread throughout Canada by Scottish and Irish immigrants and the British army. A recent book, however, has even suggested that the sport was born on the frozen ponds of England. Ultimately, ice hockey was probably the result of a combination of earlier stick and ball games played in northern Europe and pre-colonial North America.

Ice hockey games were first recorded in the 1850s and the sport soon gained widespread traction. In 1875, students from McGill University partook in the first recorded public indoor ice hockey match in Montreal’s Victoria Skating Rink, with rules largely borrowed from field hockey. Two years later, the hockey club at McGill University became the first organised team and codified the sport’s rules. These included limiting the number of players on each side to nine – these were later reduced to six. Early records exist of games in which thirty players participated and the fights probably resembled those of rival firms in football hooliganism.

The fledgling sport soon caught the eye of then-Governor General of Canada, Frederick Stanley. In 1892, Lord Stanley donated a trophy called the Dominion Challenge Trophy, to be awarded annually to the best hockey team in North America. The trophy soon became known as the Stanley Cup and, since 1926, has been awarded to the winner of the National Hockey League (NHL) play-offs. Then, in 1994, ice hockey had its cultural significance cemented in perpetuity when the Canadian government declared it to be the country’s de jure national winter sport. 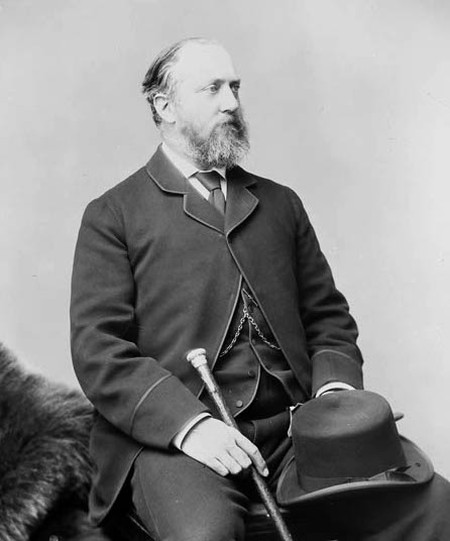 During the late nineteenth and early twentieth centuries, ice hockey spread both geographically and throughout the classes. It passed from amateur athletic clubs, composed of upper class men, to encompass leagues and teams that were formed among the middle and lower classes, often by banks or mining companies, across Canada and the United States too.

Violence has always been an integral part of ice hockey culture. Two fatal incidents in 1905 and 1907 saw ice hockey players die as a result of on-ice brawls. Although no players have died from brawls since the inauguration of the NHL in 1917, violence has remained a distinctive feature of the sport. An unofficial team role of enforcer, or goon – hilariously portrayed in a 2011 film of the same name – is responsible for responding to dirty or violent play by the opposition.

Now, ice hockey is a fundamental facet of Canadian national identity that permeates all levels of society, from books like How Hockey Explains Canada and Disney’s 1992 film The Mighty Ducks, to the University of Saskatchewan’s ‘Hockey in Canadian Literature’ course. Take the 2002 Winter Olympics, for instance, when six million Canadians tuned in to watch the women’s team win gold and 10 million, almost a third of the population, watched the men’s team follow suit three days later.

NHL ice hockey matches are played on a round-cornered rectangular rink that is 100 feet (61m) long and 85 feet (26m) wide. Teams are composed of six players – three in offence and three in defence, including the goaltender. Matches last for three 20-minute periods, with a 15-minute intermission between each.

Substitutions may take place ‘on the fly’ (while the puck is in play) so forwards generally only skate for 90 seconds at a time. Players who commit infractions receive two, five or 10-minute stints in the penalty box, depending on the severity of an offence but penalties incurred by a goaltender are served by a teammate. Although all players wear pads for protection, the goaltenders don an incredibly weighty 40 pounds (18kg) of equipment.

Goals count for one point but points are also awarded for assists, up to a maximum of three points for one goal and provided the opposition did not handle the puck in between the three players on the scoring team. NHL games cannot end in a tie so if the scores are level at 60 minutes, a five-minute sudden death overtime follows, before a shoot-out, if a victor has not emerged in overtime.