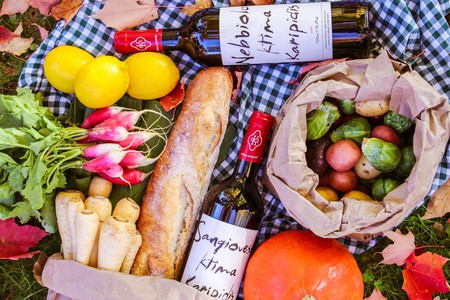 Living in a big city is no mean feat. While Toronto still hides in the shadow of the larger and more well-known cities like New York and Shanghai, it boasts over 7,000 restaurants, an eclectic array of neighbourhoods, and a foodie scene fit for a king; making it a competitor in the world of food and drink. With recent recognition increasing in the media (thanks, Drake!), tourists are flocking to this multicultural destination and you’ll need to know how to navigate like a local.

As the culinary and quintessential symbol of Toronto culture, the peameal bacon sandwich can be found throughout the city; however, the best one in town is at St Lawrence Market. Be sure to pop into Carousel Bakery where a peameal bacon sandwich sells every 15 seconds (and revel in the wall of photos of famous celebs who have made the journey in the past). 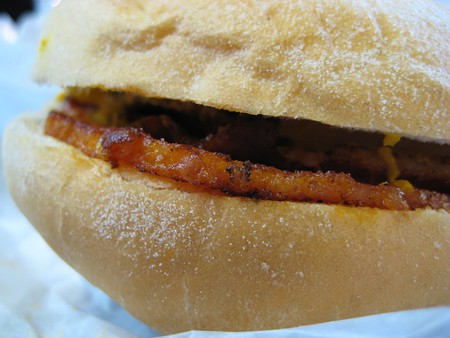 There’s A Neighbourhood For Almost Every Culture

From Greektown and Little India to Chinatown and Little Poland, Toronto is not lacking in diversity. With the various neighbourhoods comes rich culture and authentic cuisine creating a food landscape so diverse you’ll never get bored. Don’t miss out on the summer festivals held each year by the different neighbourhoods like Taste of the Danforth and Taste of Little Italy, all of which are worth the trek to for the copious amounts of street food and cultural fun.

Brunch Is A Way Of Life

This is the closest thing to religion in Toronto. As a standard weekend outing, the options are endless, from King W to Riverdale, The Junction to Kensington Market, expect long lines (you’ll almost *always* have to wait for a table) and be prepared for excessive drinking. 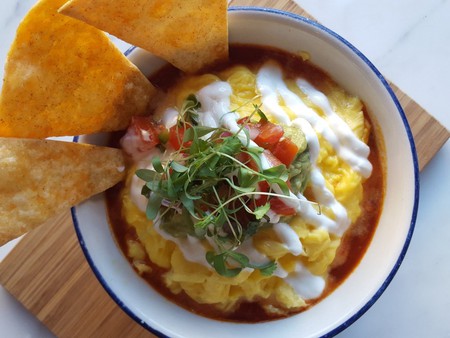 Speaking Of Drinking… The Caesar

Toronto’s ode to the bloody Mary, but with a little more flair. The caesar is a similar brunch-style cocktail that uses Clamato instead of tomato juice. Be on the look out for over-the-top garnishes like lobster tails, slices of pizza and chicken and waffles, and don’t be afraid to order more than one. Need caesar-inspiration? We’ve got the low-down on some of the best caesars in town. 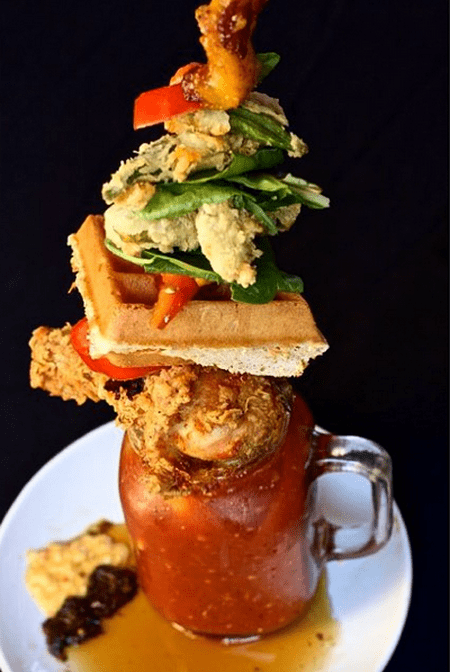 Patio and rooftop bars are all the rage during the warmer months in Toronto, and you can find one on any corner in the city. Although, be aware of the lines: they are usually long. Get there early before the patios fill up, reservations are rarely accepted.

Going Out Is Expensive… But Doesn’t Have To Be

As Toronto has risen in its popularity, the price to pay for going out has risen as well, and one night out is bound to leave a hole in your pocket. Stay away from touristy areas that jack up their prices, and opt for hidden gems tucked away in neighbourhoods like Little Italy and The Annex. Pro tip: know your ‘hoods. This will be incredibly helpful when navigating the city both for things to do and where to eat and drink.

Street Meat: The Only Consistent Food Truck, But It Gets The Job Done

Street meat, or the beloved hot dog stand, is a popular go-to for late-night snackers, post-boozing partiers or the average quick lunch. While some may say it’s not the best, it’s damn near close. Choose from the traditional hot dog, or opt for the Italian or Polish sausage; and don’t forget the toppings. The toppings! 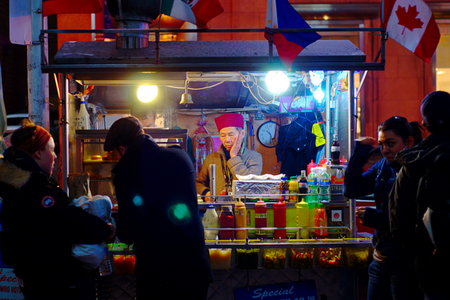 Every Toronto local knows there’s nothing better than a good roti, and they’re always on the look out for the best in the city. (Roti, you know, that charred bread stuffed with rich stews or curries). In Toronto, roti encompasses both Indian and Caribbean varieties, so expect anything from butter chicken to curried goat. The most popular in Toronto is Gandhi Roti, but other top-notch spots include Bacchus in Parkdale, Island Foods on King, Indian Roti House on Church and Mona’s Roti in Scarborough. 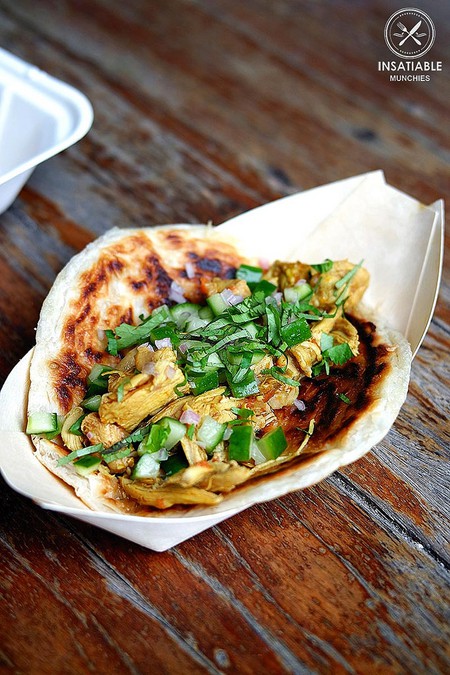 While usually found at festivals and during the summertime, Toronto still hosts a number of food trucks year-round, all of which are just as diverse as the city’s ethnic makeup. Whether it’s poutine or beaver tail you’re after, or churros, jerk chicken, Greek food, shaved ice or roti, the food trucks have got you covered. For a map and schedule of when and where to find them, get yourself the Street Food App. 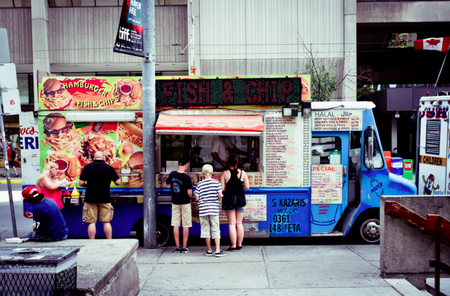 What was once a Quebecois staple is now Toronto’s most-prized possession: the poutine. Found on almost every menu from fast-food to upscale dining, this sloppy mess of fries, cheese curds and gravy is drunk food magic. Some of the best spots in Toronto are serving up the classical dish in its traditional form or with an innovative twist like the Italian or Mexican poutine. 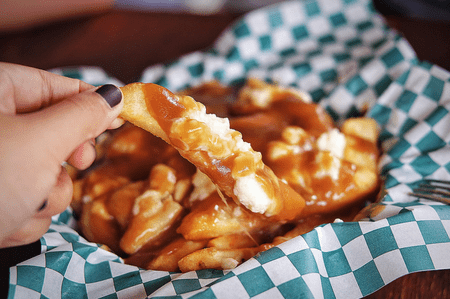 Compared to its counterparts in the US, Toronto’s happy hour, or commonly referred to as ‘cinq-à-sept‘, can be found at a number of places, though not every restaurant offers discounts. If they do, it’s usually offered on a particular day of the week. Beast offers 120 minutes of $5 snacks and drinks (from 5-7pm); Lee is slinging $10 cocktails and discounted apps during the week; and La Société does ‘buck-a-shuck’ on Thursdays, where oysters are $1 each. Do your research beforehand to find the best deals.

Those sweet little custard tarts found at any Portuguese bakery are what dreams are made of. Check out Doce Minho, Brazil Bakery or Golden Wheat for where to find freshly baked breads and these delicious treats. 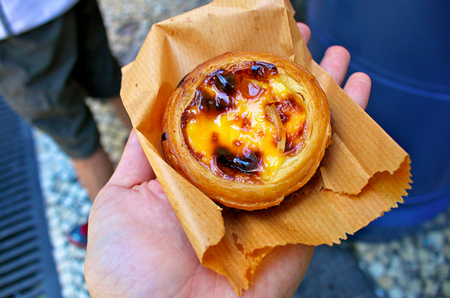 Although the commercial spots for coffee like Starbucks and Aroma Espresso are still frequented often, coffee culture has infiltrated Toronto. From east to west, indie coffee shops serving up no-fuss cappuccinos and almond milk in a trendy, low-key setting have taken over. Expect a flock of individuals working on their laptops, a man-bun-wearing hipster barista and indie rock playing from the speakers. 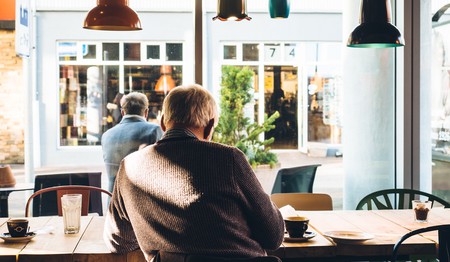 Tiki Bars Are A Thing

From Miss Thing’s to the Shameful Tiki Room, blended fruity drinks have taken Toronto by storm. The mock-Hawaiian interiors and pineapple-shaped glassware are transporting city goers to the beachside, which isn’t so bad (especially during a Canadian winter). 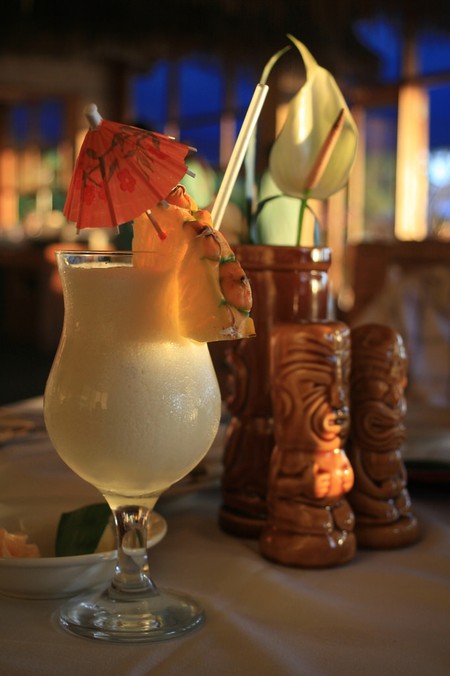 We’re no NYC or Chi-town, but we’ve got a pretty good collection of pizza joints, from cheap delivery to wood-fired pies reminiscent of southern Italy. For that cheap delivery kick, go for Pizzaiolo, King Slice or Pizza Nova. For the more traditional and upscale pizza, Pizzeria Libretto, Za Pizzeria, Queen Margherita, North of Brooklyn Pizzeria and Defina are serving up some of the best pizzas in town. 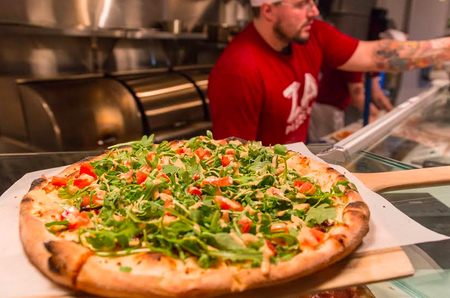 We Can’t Live Without Delivery

Doordash, UberEats and Foodora have changed the lives of Torontonians. While the usual Chinese or pizza delivery is the cheap go-to for those nights when you don’t feel like cooking (or when it’s -30 degrees Celsius, or when an ice storm hits, or when TTC is delayed), these food delivery apps have opened up the world of food, offering delivery from restaurants all over the city like famous Banh Mi Boys, P&L Burger, Yuzu No Hana and Mean Bao. Don’t be surprised when you see Foodora bikers racing through the city and possibly cutting you off in the right hand lane.

The Food Courts Are Not To Be Underestimated

What may be fearsome to many, the food courts in Toronto actually serve up some of the best food in town, with diverse selections like bao, noodles, vegan or gourmet burgers. Everyone knows The Village by the Grange Food Court is the best in the city, lined with indie vendors and international gems.

Do yourself a favour and get one of these, fried dough, topped with anything from fruit and whipped cream to Nutella and chocolate. You can’t leave Toronto without one; Obama sure didn’t. 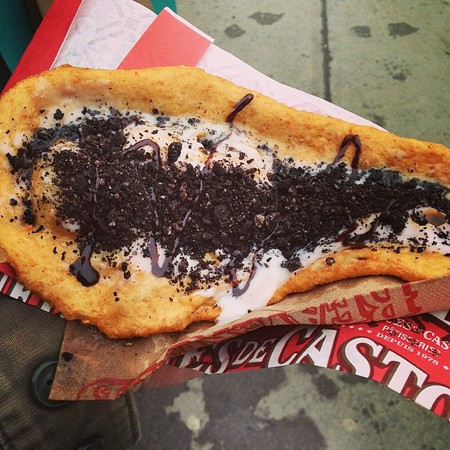 Craft Cocktails And Beer Are Part Of Our Culture

Although the LCBO still controls the sale of alcohol (like we’re still in the era of Prohibition), Torontonians prize themselves on being beer and liquor connoisseurs. Bar Isabel, Bar Chef and Rush Lane & Co are serving up crazy-good beverages, while Bar Volo, Indie Ale House, Junction Craft Brewery and Bellwood’s Brewery are representing the craft beer scene amongst a long list of others.

The Danforth Has The Best Gyros

See neighbourhoods mention above. The Danforth, or Greektown, has the best Greek food in the city, and everyone knows it. Whether its souvlaki or a gyro you’re after, be sure to get it nowhere else than this Greek epicentre. 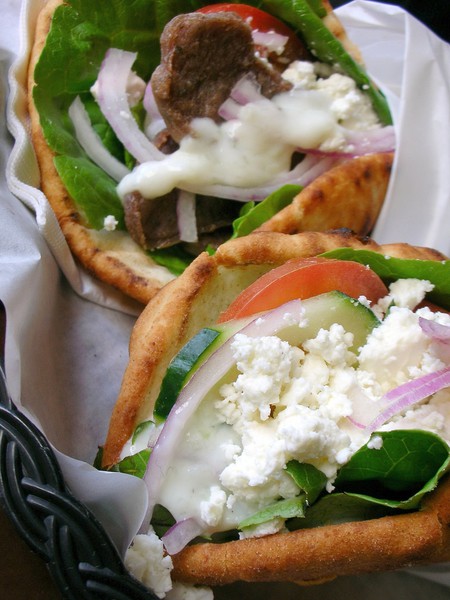 There Are Six Chinatowns, All Of Which Have The Best Authentic Chinese Cuisine

Spanning from Scarborough to Markham, the GTA isn’t short on Chinese culture; thankfully, the largest Chinatown (in North America, in fact) is right in downtown, lined with restaurants, shops and rich Chinese culture, as well as with residents who only speak their native tongue. Mother’s Dumplings is said to have the best dumplings; Rol San is known for their cheap dim sum; and Taste of China, New Sky Restaurant and Lee Garden are the places to go for classic Chinese fare. 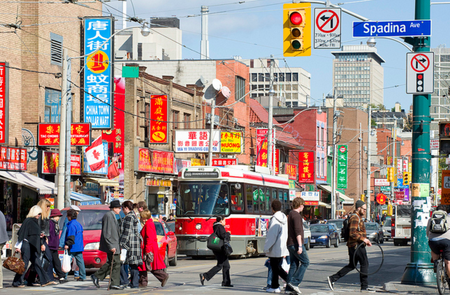 Kensington Market Is As Cool As Everyone Says It Is

Restaurants, vintage shops, cafés, butcher shops and patios; Kensington has it all. Find anything from a grilled cheese-only spot and Jamaican-Italian fusion joint to arepas and doner kabobs. Be sure to grab a Jamaican patty from Golden Patty, a pastry filled with meat or fish and incredibly tasty, and don’t be surprised when you see it on a menu stuffed inside a burger or sandwich. *Note to self: always order the Jamaican patty-stuffed item. Always. 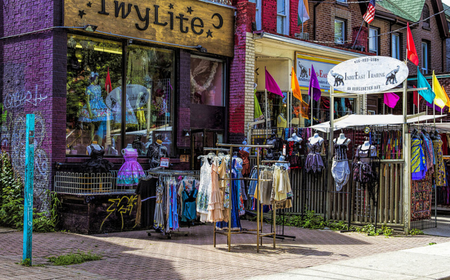