With some of the country’s best lobster and farmers’ markets, as well as a rich blend of Acadian and Scottish heritages, Cape Breton, Canada has all the components needed for a wonderful food scene. This ruggedly beautiful island on the northernmost tip of Nova Scotia remains somewhat isolated from the rest of the world. Perhaps as a result, its restaurants tend to favor local fare over internationally-inspired cuisine. Count on your meal being accompanied by some of the island’s famously genuine hospitality.

The Dancing Goat offers a menu of homemade cookies, cakes, soups, sandwiches, and breads, along with hearty breakfasts and what many would describe as the best coffee on the island. Opened in 2006, the café’s coffee is fair-trade and the menu incorporates local ingredients wherever possible. The interior is rustic and cozy, featuring a recently-renovated veranda area that allows in plenty of natural light. The menu changes daily, but expect fresh, healthy dishes like almond chicken sandwiches, cold cucumber dill soup with scenic valley beets, and curry orzo lentil salad.

With inventive food, excellent service, and sophisticated black-and-beige décor, it’s no surprise why the Black Spoon is a local favorite. The Canadian menu focuses on lighter soups and sandwiches for lunch, along with a selection of pastas, salads, as well as meat and seafood mains for dinner. The restaurant is known for bringing a fresh perspective to classic cuisine, with dishes like the haddock almondine showcasing their ability to highlight the flavors of the island’s legendary seafood in new ways. Save room for one of the restaurant’s house-made desserts, such as the Bananas Foster, which consists of bananas flambéed in a coconut rum and butter sauce, and served over a white cake and vanilla ice-cream.

The Lobster Pound And Moore

The menu at the Lobster Pound And Moore changes often to reflect the fresh seafood and produce available, but regardless of the dish, you can count on the portions being enormous. Expect dishes like ravioli stuffed with fresh lobster; seafood chowder; as well as international dishes like Korean grilled steaks. The restaurant’s décor is rustic yet sophisticated, with an open kitchen, plenty of natural woods, and wall art consisting of painted sea shells. The food is consistently fresh, and although the restaurant is often busy, the relaxed atmosphere encourages diners to savor their meals leisurely. 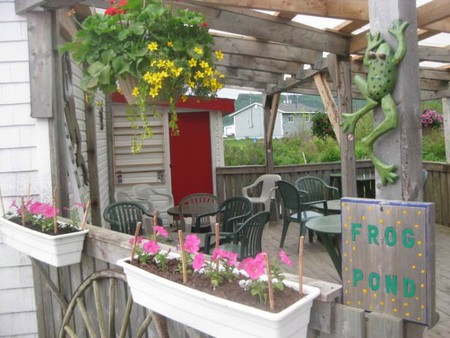 The Frog Pond Café is a charming café specializing in fresh sour dough breads, pastries, and coffees. The selection changes daily, but expect pastries like Greek Baklava and Asparagus Alfredo Swirls to enjoy alongside mugs of organic fair trade Just Us! Coffee. The menu also includes speciality drinks like chai lattes, organic teas, and cappuccinos. The property is home to the Sunset Art Gallery, which showcases the work of more than 15 Cape Breton artists. There’s a pleasant outdoor patio in the summer and live music performances sometimes take place.

The Bitehouse is an intimate 10-seat restaurant set in a historic farmhouse. Owner and chef Bryan Picard draws inspiration from his childhood in rural New Brunswick, where meals were prepared with veggies grown in the backyard, along with meat and fish caught by his father. The restaurant offers a 5-course tasting menu that changes monthly, featuring dishes that incorporate seasonal ingredients sourced from independent farmers or grown locally. Expect dishes like grilled zucchini with farmstead gouda, beef rib bacon; and brook trout with leek cream, cold-water shrimps, beans, and squash. A well-chosen selection of Nova Scotian wine and beer completes the atmosphere.

The Rusty Anchor is a casual seafood restaurant known for its fantastic views. Located around the half-way point of the Cabot Trail, the restaurant’s patio overlooks Pleasant Bay. With binoculars available, diners can watch whales swimming in the bay below. Seating is also offered inside in the restaurant’s welcoming dining room, which features low ceilings and hardwood floors. The menu focuses on locally-caught seafood and shellfish, including lobster rolls that were ranked among the best of the Cabot Trail by National Geographic. The menu also includes a number of gluten-free and vegetarian options. 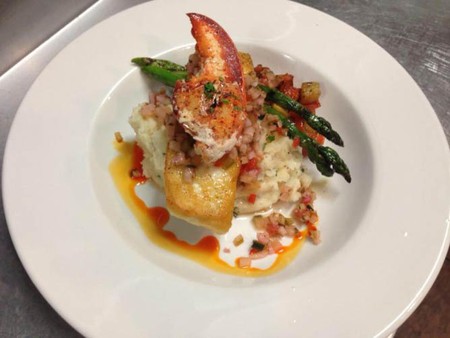 The Red Shoe Pub is a cheerful restaurant owned by the sisters of Nova Scotia’s popular musical family, the Rankins. As you might expect, the restaurant is a hotspot for live performances, with its small stage accommodating everything from fiddlers to Scottish comics. The food is classic Nova Scotian comfort food, with signature dishes including fish and chips; roasted stuffed chicken; and seared scallops and bacon. Meals are best washed down with a glass of Red Shoe Ale, a red beer specially brewed by Garrison Brewery for the restaurant.

Beggar’s Banquet is a unique dining experience offered at Point of View Suites. Based on the tradition of holding secret banquets for the poor, the restaurant is set in a replica 18th-century tavern and diners are invited to wear reproduction period costumes. The two hostesses and their staff tell historic tales, and perform traditional French and English ballads and dances. It’s camp but entertaining and the food is delicious, with diners offered a choice of market lobster, snow crab, halibut, or roasted half chicken. 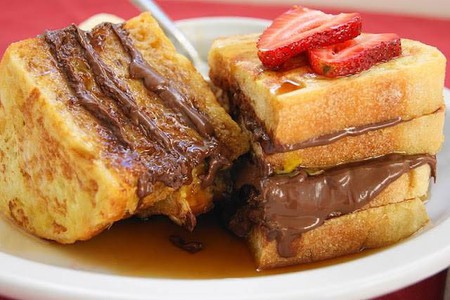 Flavor Downtown is a chic, bistro-style restaurant that serves up a menu of contemporary fusion cuisine. Owners Scott and Karry traveled extensively through Italy, Greece, and France before fulfilling their long-held dream of opening a restaurant. The restaurant’s interior is welcoming and cozy, with outdoor seating available in the warmer months. The diverse menu includes a selection of seafood, pastas, sandwiches, and wraps, along with all-day breakfast dishes. A rarity for Cape Breton, the menu also includes a number of gluten-free, vegan, and vegetarian options, as well as a paleo menu.

Le Gabriel Restaurant & Lounge offers a menu of Acadian classics, along with a few north American favorites, including steaks, seafood, sandwiches, and wraps. Go for Andre’s Meat Fricot, a hearty stew made with potatoes, chives, pork, and a choice of beef or chicken; or the Scallops St. Jacques served with mushrooms in a creamy white sauce and topped with cheese. Defined by a distinct lighthouse-shaped entrance, the restaurant’s spacious interior connects to a lounge with billiard tables as well as live music on most Saturday nights.