Tell All the Truth but Tell It Slant: An Interview With Fiction Writer Camilla Grudova 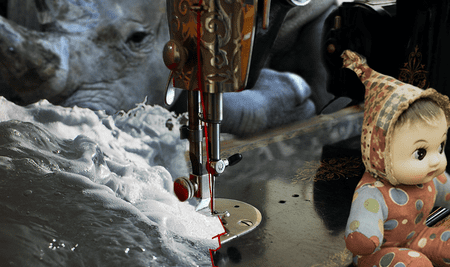 Our Global Anthology selection for Canada is author of the eerie story collection A Doll’s Alphabet, Camilla Grudova, who here talks to us about what inspires her fiction.

One day a girl invites another girl in her class over to her house. “I want to show you something she says.” That something is a dark, black sewing machine fit with a foot pedal. When activated with the aid of an earpiece, the sewing machine causes a mason jar to glow, which in turn appears to send an image of a pierrot, or pantomime, dancing across the room. The girl invites her friend to use the sewing machine and she is able to conjure a “a man with white wings, wearing a striped sailor’s shirt, and wide sailor’s trousers. His hair was golden, greased back from his face, and his lips were red, very red, like he was wearing lipstick.” The girl says to her: “I have never seen him before. I have only seen the Pierrot. This is why I wanted someone else to try it.” The creatures, and others that appear, eventually drive both girls nearly mad.

This brief summary of the mesmerizing short story “Agata’s Machine” doesn’t fully do Canadian writer Camilla Grudova’s imagination justice. The stories included in her debut collection A Doll’s Alphabet are at once macabre and wondrous, and bring to mind the visual stop-film animations of the Brothers Quay. Visual because Grudova’s imagination is among the most potent to emerge in literature in recent memory. A Doll’s Alphabet is filled with the fates of unlikely characters—the tale of a wooden mermaid from a ship’s bow; a gentleman spider’s final constitutional; women who learn to unstitch themselves and must hide their children; a menagerie of strange creatures and machinery; and yes, even the unorthodox abecedarianism of dolls.

Grudova, who lives in Toronto, first came to wide attention after “Agata’s Machine” was published by the literary magazine, The White Review. Its co-editor Jacques Testard, who also runs publishing house Fitzcarraldo Editions, soon signed her on for A Doll’s Alphabet. Attention for the book has been wide, drawing in admirers such Helen Oyeyemi, Sheila Heti, Deborah Levy, and Nicola Barker, who Grudova credits as bringing her to Jacques Testard’s attention. Grudova spoke to us about the atypical way her story collection came together, her preoccupation with anachronistic tropes, and the end of old world entertainment spots like the Ringling Bros. and Barnum & Bailey circus. 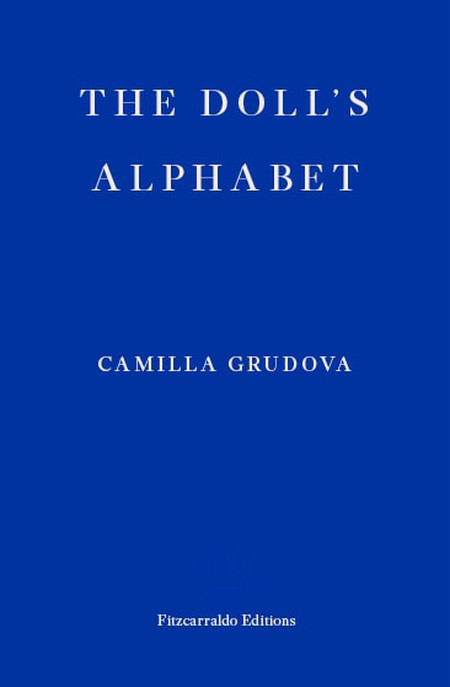 It appears you’ve had an unorthodox emergence as a writer. Your first published (and excellent) short story “Agata’s Machine” was published in The White Review in July 2015. Am I correct to assume that Fitzcarraldo bought your collection on the strength of that story alone? What was it like to be ushered so quickly from an unknown writer to a published one?
I had two stories published in a wonderful but now defunct Toronto indie magazine in 2014, but was set up with Fitzcarraldo entirely thanks to Nicola Barker. I would have fallen through the cracks without her help. I had posted some stories just on my Tumblr, and she read them, and shared them, and Jacques who runs The White Review asked me to send in some stories for consideration, accepted “Agata’s Machine” for his website then signed me for a collection based off “Agata’s Machine” and “Waxy” with his publishing house.

Then I wrote him a bunch of new stories over a period of several months in 2016. I sent them off to him as I finished them, and he edited them as I wrote more and sent them back to me with notes, which is perhaps an unorthodox way for a short story collection to be written. I imagine most writers have a polished collection to present to an editor at the beginning. Jacques chose which ones he wanted to include in a collection and I insisted on the title. It was an intense seven months, at least for me. It was all through email, I’ve never met Jacques. I guess he is some sort of 21st-century European James Laughlin. Now I have a box of blue books in my bedroom, that’s about it. It doesn’t feel any different to be published. It’s all happened in Britain which is quite far away. You have to just focus on the next writing project if you are to keep your sanity.

There is an outsider artist quality to your stories—they are unmistakably your own. I assume that you’ve developed as a writer independent of the usual channels, and I’m wondering how you came to develop your voice and tropes (e.g. sewing machines, the sea, anachronistic motifs). How did you know you hit upon something that felt entirely your own thing?
I did not do a degree in creative writing which is perhaps unusual these days for someone my age. I have a degree in Art History and Literature (which has left me with gigantic student loans) and developed my style the old fashioned way—lots of reading. I find my Art History background useful for writing, you learn how to describe things.

I actually wanted to apply to one of those all costs covered American MFAs for next fall, just to have a chance to work on my novel, but couldn’t afford the application fee… Are we entering an age when those who don’t have MFAs are considered “outsider” writers? I find the term outsider artist patronizing.

The anachronistic aspect is from my own life, my family didn’t have a television till I was a pre-teen or a computer until I was a teenager, and we never owned a car; the sewing machine was the first machine in my life, my mother taught me how to use it, I made dolls, doll’s clothes, clothes for myself. It was very much an imaginative tool for me so I associate it with writing. And my grandmother from Lublin worked as a seamstress. She lived in London and Paris at various points. I have her Polish-French dictionaries she bought in Paris. She was schizophrenic and an artist and died when I was quite young, so she haunts me. One of my mother’s favourite toys as a child, and in turn, one of my favourite toys, was this little metal sock darner that looked like a miniature typewriter, doll-sized you know, with 11 or so little prongs.

I can’t afford to own a mobile phone at the moment, I’m perpetually borrowing other people’s phones! There aren’t any mobile phones in the book because I don’t have one. I like looking for old treasures in the garbage. I find old technology useful to use to think about new technology, like not staring at something directly, maybe looking at its shadow instead. I love the Emily Dickinson line “Tell all the Truth but tell it slant—”. The sea motif comes from T.S. Eliot, I love him madly, you know:

I have heard the mermaids singing, each to each.

I do not think that they will sing to me.

I have seen them riding seaward on the waves

Combing the white hair of the waves blown back

When the wind blows the water white and black.

We have lingered in the chambers of the sea

By sea-girls wreathed with seaweed red and brown

Till human voices wake us, and we drown.

What seas what shores what grey rocks and what islands

and also ancient Greek literature, especially The Odyssey. I think one is either an Odyssey or Iliad person—I like to think they are two human personality types. I haven’t seen a sea in years though. Maybe the sea is about escape for me, or about being trapped—pretty cliché things, actually. 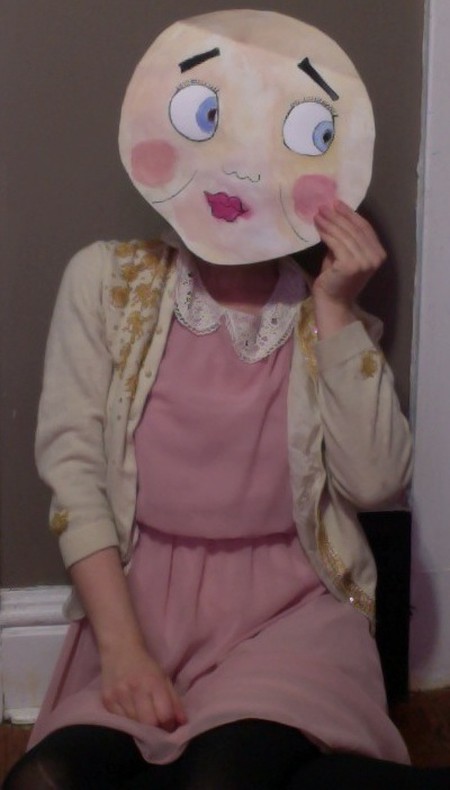 Your work has an undertone that mixes the macabre with the feminine; it brings to mind the narratives of your contemporaries such as Jen George, Renee Gladman, or Alexandra Kleeman, or Ottessa Moshfegh. Are female writers of strange literature having a moment? Do you think that this wouldn’t have been the case in the past?
No, not at all, there is a long tradition of women writing strange fiction! Ann Radcliffe, Mary Shelley, Emily Brontë, Lydia Zinovieva-Annibal, Barbara Comyns, Mary Norton, Angela Carter, Carson McCullers, Sylvia Townsend Warner, Daphne du Maurier, E. Nesbit, Silvina Ocampo, Isak Dinesen, Clarice Lispector, Leonora Carrington, Shirley Jackson etc. Shirley Jackson made a living writing strange stories in the 20th century—it is much harder to do that today. Women writers have been marginalized and treated with disdain, regardless of what kind of writing they do.

I’ve heard that you’ve written a long circus-themed story, that while isn’t included in The Doll’s Alphabet, will hopefully appear elsewhere soon. I can’t help but inquire then what you’re feelings are on the closing of the Ringling Bros. and Barnum & Bailey circus. Somehow it feels like it’s the last link to an older, more curious world. Would you agree?
I don’t think that story will see the light of day; I threw it in the garbage. It very much had to do with animals in the circus (There were a lot more animal stories in the collection, originally… and stories with more menstrual blood in them.) I am pleased, actually, to hear that the circus is closing, because of their use of animals for entertainment, especially elephants (I believe they retired all their elephants a few years ago) which are such intelligent, magnificent beings, and pigs, who are used by humans for just about everything. I would not be surprised to meet a man with a pig’s heart in his chest and a pigskin briefcase, who eats sausages for breakfast. Human curiosity is often linked with human cruelty.

However, I like films, and books, and art about circuses, I think I felt a need to examine them because they are so dark and cruel. I love reading about pigs, apes, elephants—the history of their use by humans is horrifying; I would highly recommend reading the Reaktion Books Animal series, which are cultural histories of animals in human society. I also love the film He Who Gets Slapped, and Fellini’s The Clowns and Angela Carter’s Nights at the Circus. I’m looking forward to reading Yoko Tawada’s newest book, Memoirs of a Polar Bear, which is partially set in a circus; she is a genius. In Canada, there is a cruelty free circus, Cirque du Soleil, which creates new, curious worlds. I would love to go.

For me, the recent closing, in Toronto, of an old discount department store with a bit of a show business theme called Honest Ed’s, to build condos of course, was the last link to a more eccentric, curious world. It was the kind of place where you could buy tinned foods, plaster Elvis busts and affordable bras, while surrounded by pictures of forgotten broadway stars and signs that said things like “Honest Ed’s fulla baloney, but his prices are ‘teeney weenies’”

What’s next for you? And what are you currently working on?
I’m working on a novel, another collection of short stories and a collection of connected fantastical diary-like essay things, but I don’t know, I’m full of despair and hopelessness most of the time. I would like to work at a bookstore in a small English village close to the seaside or something.